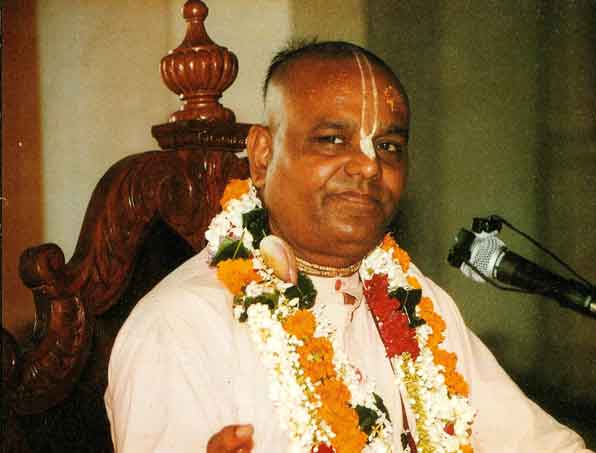 H.H Radha Govind Maharaj mentions this incident on his flight from kenya to India...his flight had a transit via kuwait. due to some delay he had to wait for 4-5 hrs at Kuwait.

While chanting Hare Krishna in the airport lounge, 1 airport official watching the indian swami became intrigued and called him over to speak.

At first Maharaj was feeling somewhat reluctant to go ...as he was in a country which may not appreciate his path.

Gathering courage with faith in his Lord, Maharaj went to meet the man.

The official quickly opened the discussion with his introduction and then asked Maharaj if he was a Hindu swami.

Getting his answer yes, He asked " i heard hindus worship stone as God"

Maharaj immediately answered him in a way that he may understand.. "Oh, No , we don't worship stone as God but we worship God in stone"

This answer surprised the gentleman and intrigued him. Now he wanted to know how?

Maharaj then said "Actually as per your scriptures, Allah has a bluish face, he is playing flute and that he has many followers devotees staying with him."

Maharaj contd " Ofcourse not all have seen him, only those who are pure have seen him. So now if you love someone , many times people to remember the beloved and to cherish their memories , they make a beautiful painting or sculptor of the person. Similarly , in our tradition those who have seen god have beautifully painted them and carved his form for them to remember him and also help see those who have never seen them"

Wanting to ask more , know more - the man was ready with his queries.

Just then some alarm rang announcing time for Namaz prayers.

Politely excusing himself, the man there and then opened up his mat put it on ground and began offering prayers.

He was not alone, literally the whole airport joined him .

Meanwhile Maharaj contd chanting the holy names on japa beads in his style.

Minutes later, the man was done with his prayers and so he joined back.

This time Maharaj opened the discussion with the question ....

" Are you sure that your prayers are being heard by Allah"...

Maharaj, "So you mean your prayers,Allah can hear !"

Man quite annoyed remarked, " Just like you can hear me, Allah can hear all of us"

Maharaj, " That means Allah has ears to hear. Since i hear thru ears as per your logic"

( Maharaj mentions to the bhagavat saptah audience that at this time i didnt inform him that god need not have ears to hear......he can also hear from legs, mouth "angani yasya sakalendriya..." . He was not ready for this advanced version)

Maharaj contd " If he can hear you, can he also speak to you"

Maharaj "Then can he not see you when you are in trouble".

Sure came the reply.

Maharaj," It means Allah has ears, eyes, mouth- implies Allah has a form"

The gentleman couldnt believe how simple it could be...

Just then Maharaj heard the announcement for boarding of his flight to India.

Confirming from him the time, Maharaj asked for his leave....

Impressed by the swami, the officer asked " you do not have a watch !".

"No" said maharaj... The officer immediately went to a shop, bought one nice watch for maharaj and gave him as a gift saying " You may require to check timings for your prayers".

The officer was happy to meet Maharaj and they both parted.

Radha govind Maharaj was initially skeptic about the watch...should he take it or not.....anyways he carried it as it was bought in the airport,,,however he did not wear it....he reached India , showed the watch to his disciple and after full safety confirmation he wore it.

- Taken from a bhagavat saptah of H.H Radha Govind Maharaj at potomac.