With great sadness, the Governing Body Commission (GBC) of ISKCON, deeply mourn the departure of Her Grace Yamuna Devi. She dedicated the last 45 years of her life to the worship of Krishna and Srila Prabhupada. She was a mentor, guide, and friend to many and a beloved member and hero of ISKCON. At every ISKCON temple, her singing of "Govindam" greets the Lord.

Yamuna Devi explained something of her relationship with Prabhupada while addressing the GBC in 2000, "In both men and women, Srila Prabhupada observed our propensities and expertly dovetailed them in his preaching mission. For many years, in different countries and circumstances, I had the good fortune to render personal service to him. He trained me, urged me to accept more and more responsibility, and regularly asked me to lead kirtanas, give classes, arrange programmes, manage departments, provide comforts for visiting devotees, meet with leaders, and actively promulgate Krsna consciousness. In ISKCON India, where previously no women were allowed, he sent me to various temples to learn cooking and Deity worship, and he repeatedly asked me to train others in the same." 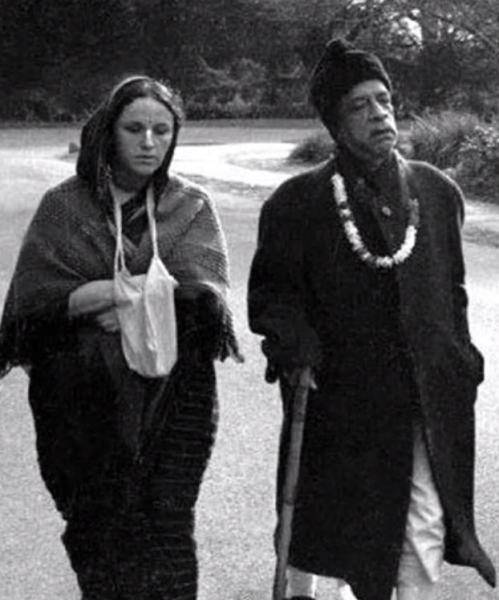 Yamuna Devi was well known for her own caring and compassionate nature. Though famous in ISKCON and beyond, she was kind and unpretentious. She was always singing or chanting Hare Krsna, and had focused attention on whatever service she was doing. Her cleanliness standards were immaculate and she dedicated herself to following Prabhupada's instructions in her actions, words, character, and heart. Whoever met her experienced through her both Prabhupada's uncompromising standards and his love. She published her own cookbook entitled, "Lord Krishna's Cuisine: The Art of Indian Vegetarian Cooking" which garnered multiple awards, including the International Association of Culinary Professionals Cookbook of the Year.

She spent her time in recent years mostly in Saranagati, a farm community in Western Canada teaching devotees by precept and example. Yamuna Devi's mood can be appreciated in a personal offering to Srila Prabhupada in 2002:

"Dear Srila Prabhupada, I remember how kirtan was so intense and joyous in your presence. How time and place dissolved in those kirtans. How your thumbs lifted off the surface of your kartals as they sizzled in sound, and how your vocal cords and mouth vibrated and extended as you filled a space with hauntingly beautiful transcendental sound vibrations. I remember losing myself in that sound and wishing never to leave this space or your presence.

"In this connection, I pray, even if only one more time, to hold the microphone for you as you chant your favorite Vaishnava prayer -- Hari Hari Biphale -- as experienced that final time at Akash Ganga in Mumbai. "I pray that one day in the future I may see you face to face again. This vision may be many lifetimes in front of me, but I do not see any goal worth achieving, however slow or difficult or impossible this task may seem from my fallen position. There is nothing else more appealing.

"Please bless me with the perseverance to continue on the path to meet you. "Your eternal servant, Yamuna Devi" We lament the departure of our dear godsister and Srila Prabhupada's dear daughter Yamuna Devi from our material vision -- and rejoice in her reunion  with him as she desired.