Hell-bent to go to Hell 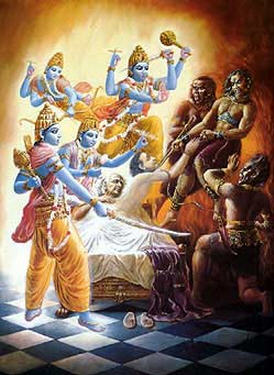 Sometimes people argue that hell does not exist and that there is no track of whatever sins we are doing.

But 3rd Canto 30th Chapter of Srimad Bhagavatam clearly explains the existence of hell, how far it is from earth, how the living entity travels after he leaves his body, what are the various types of punishments he undergoes there. Verses 25 through 27 in particular give us a sample glimpse of the various kind of punishment the living entity has to undergo if he leads a sinful life.

"He is placed in the midst of burning pieces of wood, and his limbs are set on fire. In some cases he is made to eat his own flesh or have it eaten by others. His entrails are pulled out by the hounds and vultures of hell, even though he is still alive to see it, and he is subjected to torment by serpents, scorpions, gnats and other creatures that bite him. Next his limbs are lopped off and torn asunder by elephants. He is hurled down from hilltops, and he is also held captive either in water or in a cave."

Bhagavatam also mentions how men and women whose lives were built upon indulgence in illicit sex life are put into many kinds of miserable conditions in special hells known as Taamisra, Andha-taamisra and Raurava.

In purport to verse 3.30.31 Srila Prabhupada mentions, "Species lower than human beings are not responsible for their actions because they are made to act in a certain way, but in the developed life of human consciousness, if one is not responsible for his activities, then he is sure to get a hellish life, as described herein." So it is important for us to understand our responsibilities and give up sinful activities, so that we don't have to suffer in hell.

The following is an instructive moral story told by His Divine Grace Bhakti Siddantha Saraswathi Maharaj Prabhupada. Once there lived a drunkard in a village. Seeing his condition, a sadhu compassionately advised him, "Please give up drinking. If you drink, you will go to hell." The drunkard replied, "But Suren babu is also drinking." The sadhu said, "He will also go to hell." Then the drunkard started listing all his friends, "What about Varunbabu and Arunbabu?" The sadhu replied patiently, "All of them who drink will go to hell." Pleased to hear the reply the drunkard further inquired, "What are all the other sins for which one will be sent to hell?" The sadhu said, "People who say lies, people who cheat others, those who loot others and all those who are engaged in illicit sex, all are destined to hell." Then drunkard asked, "So what about the prostitute Padmini?" The sadhu replied, "She will surely be sent to hell. She and all prostitutes will be sentenced to hell." Hearing this the drunkard became joyful, "Oh ! Then that hell is really a jolly place to stay."

Many of us have the same mindset as this drunkard. We think that if majority of people are doing the same mistake, then there is no harm in us doing the mistake.

But that is not the case. Intelligent people learn from others mistakes. But foolish people think they are in safe position as long as majority of people are doing the same mistake.

Just because majority of people are doing the mistake, Krishna is not going to change His laws. Even if we are all going to be in hell with our friends and followers, each one of us will be fried in separate oil pans according to the level of mistake. As it is our past-sinful acts will take us to hell, if we don't perform sincere devotional service in this life. So let us not be hell-bent to go to hell. Instead of adding on to our sin list, we should try to make the best use of this human birth.