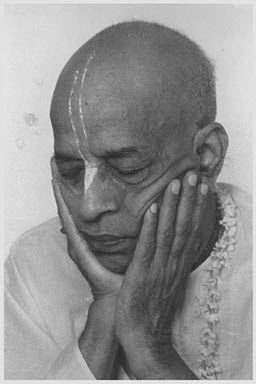 What a treat it was on a Zoom call with 45 colleagues who are influential bhakti yoga instructors from different parts of the globe. It was a planned, three-hour seminar for gurus in the diksha category. Presenters such as Bhaktivaibhava Swami from Germany, Atmanivedana Swami from India and Ravindra Svarup from America, spoke marvelously on the topic of challenges for a guru.

There was a Q&A session and a portion of time given to breakout groups. I was asked to facilitate. I’m bashful with these things but it went alright as a facilitator for one of these groups. After all, I am a member of the Guru Service Committee so I must render some service.

The sangha or association was invaluable. The group agreed to do more of these sessions.

A second Zoom call connected me with Mauritius where I was asked to read and comment on a chapter of the Prabhupada Lilamrita entitled “Beyond the Lower Eastside.” The section I read touched on the topics of the restrictions on sexual intercourse for a yoga practitioner. That becomes a controversial topic as it is now, to this day.

Can yoga adherents or teachers, whatever the yoga, impose restrictions on people who engage in this activity? One answer will be — if you want to have results then there has to be some discipline. We are not talking so much about suppressing the sex drive but rather regulating it. This is the practice of a guru.