Mayapur community devotees had a fantastic Govardhan Puja celebration with abhishek, Govardhan lila class, annakut and circumambulation of Giriraj. The  program started with Mangala-Arati at 4:30am, followed by Srimad Bhagavatam class at 7am by HH Bhakti Vighna Vinasa Narasimha Swami.

Darshan-Arati which all devotees were eagerly waiting for took place in no time just after Bhagavatam class at 8am, the Deities were glowing and full of glory as always, smiling shining and pouring out their mercy.

Devotees cautiously took turns, carefully observing covid protocols while going around Govardhana hill that was backed up with an ecstatic kirtan, the atmosphere was indeed glorious.

Abhishek started at exactly 11am and lasted for 45min, devotees were all enormously submerged in the abhishek and it came to conclusion with the glorious Sahasra Dala abhishek (Transcendental Shower). Abhishek was quickly followed by Annakut bhoga offering and Maha Arati. 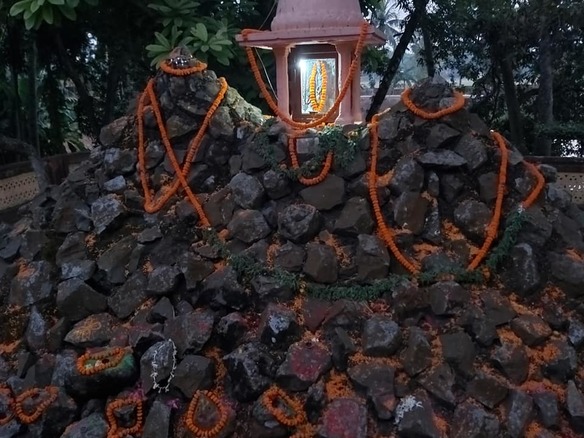 Once, when the elder people of Braj including Nanda Maharaj were planning for the Puja of Lord Indra, Shri Krishna, a child then, questioned them as to why they were doing so. Nanda Maharaj explained to Krishna that this was done every year to please Lord Indra so that he continued to grace the people of Braj by providing rain as and when required. But little Krishna debated that they were farmers and they should only do their duty, he also explained to his father saying we are Vaishya and we don’t depend on Indra, Indra’s rain falls on the sea and there is so much water on the sea, they don’t do any worship to Indra but still it rains on the sea, so you don’t need to worship Indra to get rain, you just simply have to do you work by concentrating on farming and protecting the cattle, rather than performing pujas or conduct sacrifices like this for any natural phenomenon. Little Krishna further said that what is best to be done is to worship the cows, brahmanas who are the representatives of the Lord and the Govardhan Hill. We should worship the Govardhan Hill. Nanda Maharaj who has been listening finally agreed but said to Krishna, Of course let us offer both poojas but Krishna refused to this saying no no no we don’t have all that time, we should prepare to worship Govardhan Hill with all you have kept for Indra and even more. In this way the Inhabitants of Vrindavan were convinced and Govardhan puja took place, with lots of different offerings, sweets, yogurts etc.

Furious with the inhabitants of Braj for listening to the little child Krishna and worshipping the Govardhan Hill instead of him, lndra, the King of Heaven, decided to punish them by sending terrible rain clouds to flood the land of Vrindavan. Calling the Samavartaka clouds of devastation, lndra ordered them to lash upon Vrindavan with torrents of rain and thunderstorms and cause extensive floods that would destroy the livelihood of the inhabitants.

Seeing this, the inhabitants of Vrindavan became disturbed and frightened, so they approached Krishna for help.
Krishna, who understood the situation perfectly well, lifted the entire Govardhan Hill at once with His left hand, and held it up like an umbrella. One by one all the inhabitants of Vrindavan, along with their cows and other household possessions, took shelter under Govardhan Hill. For seven days they stayed under the hill, safe from the terrible rains and surprisingly undisturbed by hunger or thirst. They were also astounded to see the huge Govardhan Hill resting perfectly balanced on Krishna’s little finger.

As we all know, one of the sole purposes of the Govardhan Leela was to take away the pride of  Indra, because as the King of heaven Indra has been very proud and arrogant and so he was thinking he has a right to the worship performed by the inhabitants of Braj…

We thank all our donors for their contributions for Govardhan Puja.