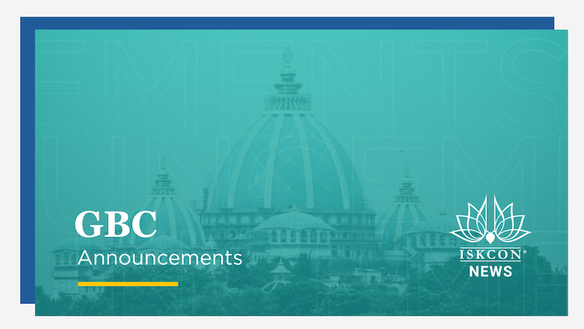 From the ISKCON Communications Ministry
September 7, 2022

The ISKCON Governing Body Commission (GBC) today released its decision regarding the status of Lokanatha Swami. That resolution is attached below along with other relevant documents.

The GBC also released two other documents. One is the 73+ page report and recommendations of the 5-member Panel appointed by the GBC to review Lokanath Swami’s situation.

The other is a separate, single-page GBC resolution that was passed after the Lokanath Swami decision was finalized. That decision clarifies the GBC’s self-imposed limitations so that in the future any credible allegation of abuse by any ISKCON leader must automatically be delegated to the appropriate ISKCON committee or office, including the Child Protection Office, the Prevention of Leadership Misconduct Office, the ISKCON Sannyasa Ministry and the Guru Services Committee and not come directly to the GBC for review.

The GBC decided this additional resolution was required to avoid the quandary that the Lokanath Swami situation caused. As explained in detail in the Panel report, allegations of abuse by Lokanath Swami arose several years before ISKCON’s Child Protection Office (CPO) was formed in 1998.

At that time, there was no other ISKCON authorized office to investigate child abuse allegations, so the GBC launched its own investigation. Lokanath Swami was required to undergo a psychological assessment, and later restrictions on his travel and ability to initiate for several years were put in place. He also apologized to the minor involved and her family. (See the Panel report for details).

However, questions arose and later further inquiries were launched to determine whether the GBC decision was sufficient. The recent review led to strong opinions being expressed throughout ISKCON on both sides of the issue. Some felt the Lokanath Swami case should, as with other abuse allegations, be sent to the CPO and that the past GBC decisions were not as stringent as the CPO might determine. Others argued that the earlier decisions and restrictions were sufficient, and that no one should be repeatedly investigated or punished for events that had been adjudicated decades before.

Seeking an appropriate response to new calls for a review and to legitimate questions whether the GBC had handled the situation properly in the past (although no new allegations of child abuse had surfaced), the GBC created a special Panel to fully consider the situation again in 2021.

“The GBC knows it must have procedures in place to respond when leaders, including Presidents, Sanyasis, Gurus, or GBC Members are alleged to abuse their positions and those under their care,” said Anuttama Dasa, ISKCON’s Minister of Communications. “Spiritual communities are not immune to abuse. The GBC decisions released today recognize that we must continue to develop and improve systems that are both effective, and an arm’s length from the GBC to ensure neutrality and fairness, and that vulnerable members are protected.”

The Lokanath Swami Panel was split in part of its decision. The GBC, following the majority opinion of the Panel, decided to not fully reopen the Lokanath Swami case, or send it to the CPO, as some wanted.

“The GBC agreed with the majority of the Panel that the case need not be reopened. The GBC also affirmed that the North American restrictions on Lokanath Swami may remain, and that Lokanath Swami may not travel to, or initiate, in regions unless they specifically welcome him to do so. Other regions may follow suit with their own restrictions,” said Anuttama.