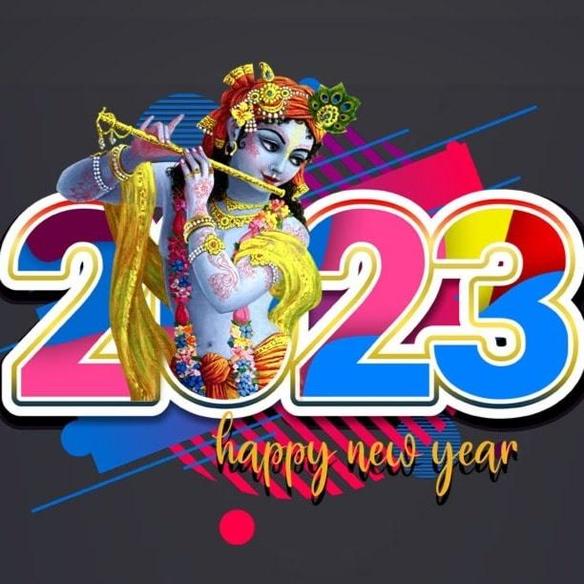 * A New Year Message from the ISKCON Governing Body Commission *

Dear ISKCON Members and Friends,
Please accept our humble obeisances. All glories to Srila Prabhupada.
Looking back on 2022, we want to thank you for your many continued services to Srila Prabhupada, and to Lord Caitanya’s mission of spreading Krishna consciousness to every town and village in the world.
After several years of differing degrees of being isolated from one another and from our communities due to the pandemic, we look forward to more opportunities in 2023 to attend temple programs and festivals together, and to hear and chant openly in each other’s association.
While the material world is always a troubling place, as this new year begins we find shelter in Lord Krishna’s promise in the Gita that “to those who are constantly devoted and worship Me with love, I give them the understanding by which they can come to Me.”
We pray that 2023 will be a year of continued progress in your spiritual endeavors, and that the Lord will bless you, and your families and friends, with health, happiness, and continued advancement in the awakening of your eternal relationship with Lord Krishna.
Your servants,
GBC Executive Committee
Bhanu Swami
Guru Prasad Swami
Revati Raman Dās

——–
Dear Members of ISKCON,
Please accept our humble obeisances. All glories to Srila Prabhupada.
To begin the new year, it is the intention of the GBC Body to be more proactive in informing the ISKCON world of our activities, discussions, and decisions. We shall thus share regular and relevant updates in relation to GBC meetings, Ministries and Standing Committees through the GBC website and social media handles.
The GBC members are trying our best to serve Srila Prabhupada, our previous acaryas, and Lord Krishna. We ask that you pray for us that we may perform our duties this year in a way that pleases the Lord. We are honored to serve in your company, and to be in your service.
Your servants,
GBC Executive Committee
Bhanu Swami
Guru Prasad Swami
Revati Raman Dās
——–
GBC Meeting Report
January 4, 2022
Present: GBC Members, Ministers, and Representatives of the SABHA
Bhanu Swami, the Governing Body Commissioner Executive Committee Chairperson, opened the meeting with Srila Prabhupada’s pranam prayers, and chanting of the Pancatattva mantra and the Hare Krishna mahamantra.
GBC member Tapana Mishra das the provided the opening reading that he had selected from Caitanya Caritamrita, Adi Lila 3.98, verse and purport.
Meeting Dates
The GBC discussed whether the GBC meetings and ILS (International Leadership Sanga) should go on as scheduled, considering the upsurge of Covid cases in some parts of the world. It was noted that in most places, including India, the number of cases is relatively small.
The GBC resolved to:
• Hold the GBC Annual General Meeting (AGM) as scheduled in Sridham Mayapur February 7-11, 2023
• Hold the ILS as planned in Mayapur February 12-16
Other festivities will also go on as scheduled beginning February 17, including the Mayapur Festival, Parikrama, and Kirtan Festival.
Leave of Absence
GBC Members Bhakti Bhusana Swami and Radha Krishna prabhu were granted official Leave of Absence from the GBC meetings due to health issues. (Generally these are requested and granted for one year periods.)
Vyasa-Puja Book
GBC Emeritus Member Praghosa das was affirmed to coordinate a committee of Ananda Tirtha das, Dravida das, Kishori dasi, and Muhkya dasi, to decide the best ways to continue publishing the Srila Prabhupada Vyasa-puja book. They will consider online publishing, adding new production staff, etc.
GBC and India Bureau Committee
Most of the meeting was spent discussing who would serve on the committee created to dialogue with the India Bureau regarding Vaishnavi diksa gurus (VDG), and guru-tattva in ISKCON. (See https://iskconnews.org/gbc-pauses-vaishnavi-diksa-gurus…/ and scroll down to see the Nov 2 decision).
Due to lack of consensus at this point, no decision was reached.
Next Meeting
The GBC has been meeting weekly since the early days of the pandemic. The next regular meeting will be Wednesday at 5 PM IST via a zoom call.
Hare Krishna
(Distributed by GBC Communications)