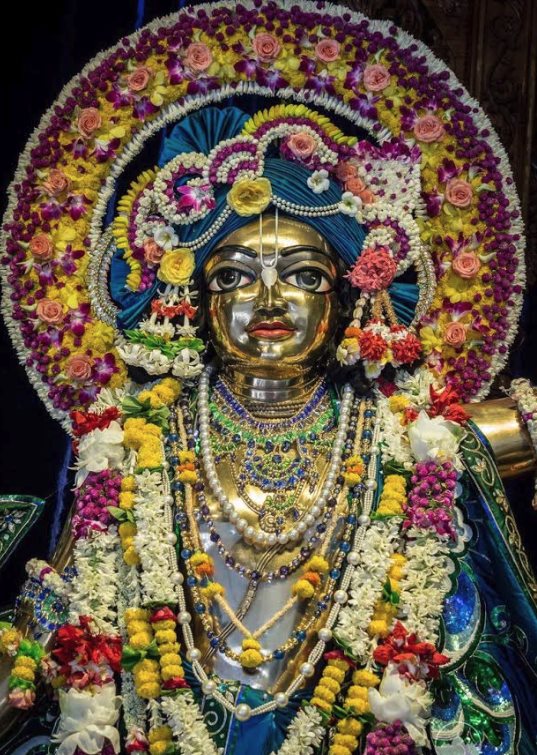 In this material world, relationships are short-lived. Growing up many people have said to each other that they will remain together forever, but due to providence such relationships hardly last for years. But such a scenario was unseen in the life of Gadadhara Pandit. He was the most intimate companion of Mahaprabhu and was very dear to Him [Mahaprabhu].

Gadadhara Pandit was born in the village of Beleti Gram in the Chittagong district (modern Bangladesh) in the year 1486 AD. His father was Madhava Mishra and his mother was Ratnavati Devi. He also had a younger brother named Baninath. He moved out to Navadwip after he turned twelve.

In the Gaura-ganodesa-dipika (148-150) it has been explained by Kavi Karnapura that in Vraja-lila Gadadhara Pandita was Srimati Radharani and Lalita Sakhi. According to Sri Caitanya Caritamrta: “No one can describe the characteristics and ecstatic love of Gadadhara Pandita”.

While Mahaprabhu was delighting in his pastimes as a student, there was no scholar in the town of Nabadwip who was not afraid of entering into debate with him. Mahaprabhu would defeat one’s position and then show how the same position could be defended. Mukunda, Srivasa and others who knew the joys of the devotional sentiment were afraid of getting involved in such useless debates. Even Gadadhara Pandit would keep a distance with Nimai Pandit.

When Mahaprabhu returned from Gaya and began to reveal the amazing transformations of love, all the devotees were astonished. Srivas Pandit was the first to see Mahaprabhu’s ecstatic symptoms and he reported this news to all the others who were overjoyed. When Mahaprabhu decided to reveal his true identity to the devotees, he told them to come to the house of Shuklambar Brahmachari. Gadadhara went to Shuklambar’s house but was discreet about his presence there, but when he saw Mahaprabhu become intoxicated with the power of the Holy Names and overcome by the sattvikas, he fainted. Mahaprabhu then said to him: “Gadadhara! You have such good fortune. From your early childhood, your mind has been fixed on Krishna’s lotus feet. Meanwhile, I have wasted my life in useless activities. Though I had obtained the great treasure of a human birth, by my misfortune, I made no use of it.” (Chaitanya Bhagavat 2.1)

Whenever Mahaprabhu became too overcome by his ecstasies, Gadadhara would calm him. One day, as Mahaprabhu was crying out in separation, “Where is Krishna? Where is Krishna?” Gadadhara said to him, “Your lord Krishna is hidden in your heart.” As soon as he heard this, Mahaprabhu began to claw at his chest, but luckily Gadadhara was able to stop him by holding his hands and calm him by saying, “Krishna will come shortly, be patient.” When Sachi saw how Gadadhara was clever in handling her son, she asked him to always stay by his side to protect him (Chaitanya Bhagavat 2.2.198-210). Therefore, Gadadhara Pandit was the constant companion of Mahaprabhu. He participated in Mahaprabhu’s water sports, he acted in the play about Krishna lila in Chandrasekhara’s house, he observed the great epiphany (maha-prakasha) in Srivasa Angan; he was there when the Kazi was converted; he accompanied Mahaprabhu to Puri after He [Mahaprabhu] took sanyas where he joined him in cleaning the Gundicha temple, bathing in Narendra Sarovara, etc.

Gadadhara Pandit was by nature simple and affectionate. On one occasion, Vallabha Bhatta came to see Mahaprabhu and the two were engaged in jocular conversation. When Mahaprabhu saw that Vallabha Bhatta was proud of his scholarship, he became somewhat distant from him and started to find flaws in everything that he said.

Vallabha responded to Mahaprabhu’s indifference by starting to visit Gadadhara and making a show of attachment to him. Mahaprabhu did not particularly care for Gadadhara’s relation with Vallabha and began to demonstrate a certain coolness toward him also. This behavior made Gadadhara fear that Mahaprabhu would ostracize him and so he came and fell at his feet and started to cry. Mahaprabhu laughed and embraced Gadadhara and told him that He just wanted to agitate him but he just patiently bore everything. By doing this Gadadhara Pandit had purchased Mahaprabhu. Thus, Mahaprabhu has been given the name Gadadhara-prananatha, “Gadadhara’s life and soul”. No one can describe the lord’s mercy toward Gadadhara; thus people sing their names together: Gadai-Gauranga.

In Bhakti-ratnakara, Narahari Chakravarti has described the terrible suffering of Gadadhara in Mahaprabhu’s separation. He remained alive only in order to be able to see Srinivas Acharya.

Srila Gadadhara Pandit lived for 49 years and disappeared at Puri in 1535 AD.