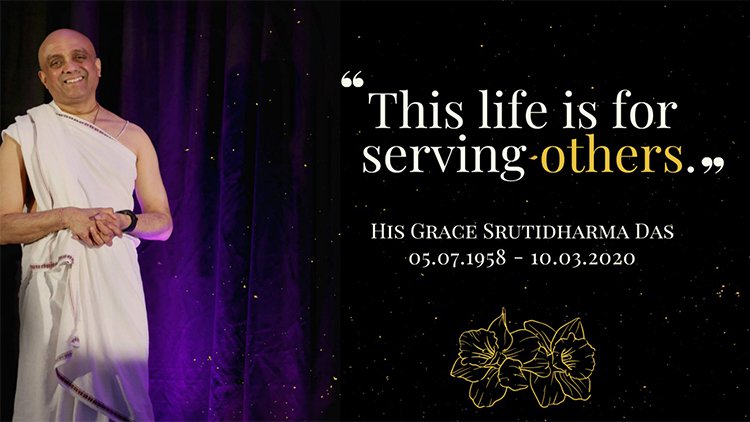 His Grace Srutidharma Das, former temple president of Bhaktivedanta Manor, UK, passed away on Tuesday March 10th at the temple where he dedicated his life in devotional service.

Although he took on the post of temple president at Bhaktivedanta Manor in 2009, Srutidharma Prabhu served at the Manor for over forty years, starting back in 1978.

Diagnosed with cancer in early 2018, Srutidharma’s condition meant he had to withdraw from active service. He spent his remaining days absorbed in Krishna consciousness. During this time he continued to inspire both guests and personal carers with his expressed love and deep gratitude. Without complaint he accepted his condition as the Lord’s mercy upon him, through which he might progress his inner life more deeply.

In his final hours he was serene and without discomfort. His passing was auspicious as was his life, surrounded by devotees, chanting the Lord’s holy names, in the holy place of Bhaktivedanta Manor Hare Krishna Temple.

Several events took place on March 12th to honor His Grace Srutidharma Das. The first, from 11:30am to 1:45pm at the Sri Krishna Haveli at Bhaktivedanta Manor, was Antima-sraddhanjali, or kirtan, offering flowers and final respects. The second, from 3 to 4pm at Saint Marylebone Crematorium in London, was the Antyeṣṭi-kriyā, or Ceremony of Cremation.

Finally, devotees absorbed themselves in kirtan, or congregational chanting, for Srutidharma Das from 7 to 9pm at the Sri Krishna Haveli. Further evenings of kirtan in his honor will take place at the Haveli at the same time on Thursday, Friday, and Saturday, and from 4 to 9pm on Sunday.

At this time, Srutidharma Prabhu’s own writings, from his article “My Thoughts on Cancer,” are particularly poignant:

“The Bhagavad-gita explains that we are spiritual beings on a material journey,” he wrote. “This life is simply a chapter, and according to the spiritual consciousness we develop now, the rest of the story unfolds. Our current situation is a result of past activities, and the responses we generate now will determine our future. Having the bigger picture helps to put everything in perspective.”

“I have mixed feelings,” he added. “On one side there is a natural care, concern and affection for my spiritual friends and family who I have spent so much time with. We have served each other and been through so much. We have plans to do so much more, and the thought of separation is painful. On another side, there is anticipation, urgency, opportunity and excitement to deepen my own spirituality and use this test to come face to face with God.”