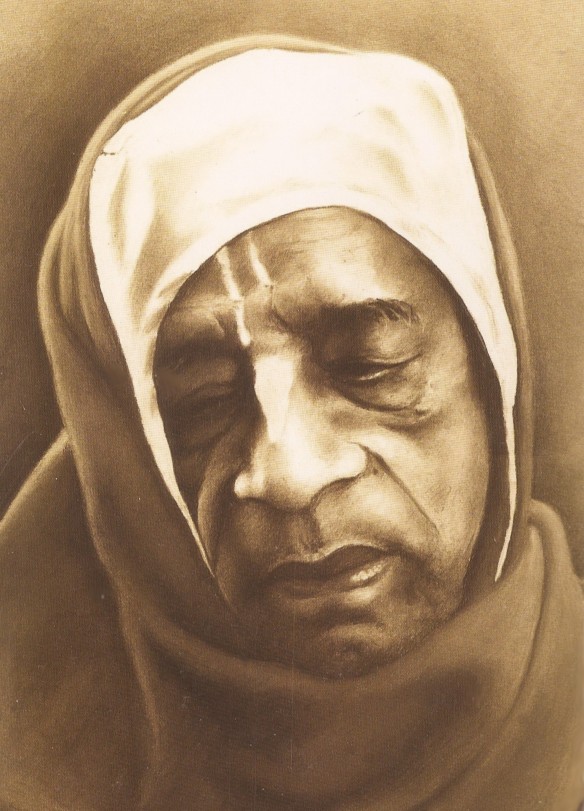 And he made a system. He named certain leaders—Tamal Krishna, Yamuna, me—and said that they should get together every week and discuss the problems, and whatever they decided they should write down in a minute book, and they should all sign and then do what they agreed.

But after all was said and done, Srila Prabhupada’s mood seemed to change. He said, “Actually, we shouldn’t become too involved in such concerns, because our real business is to hear and chant about Krishna, and if we become too absorbed in making material arrangements, we will forget our real business of Krishna Consciousness.”

He said that as it is our tendency to discuss mundane topics, so we should be careful and try to minimize the mundane talks and concentrate on hearing and chanting about Krishna. Then Srila Prabhupada said that in his life he never complained, because his policy was always, “Everything for Krishna and nothing for me.”

He mentioned how he struggled to get the passage to America, and then on the way he suffered two heart attacks at sea. And even when he got to America, he suffered in so many ways; he had some buzzing sound in his ears and his head. “I cannot even describe how much I suffered—nor do I want to.”

He said he had suffered in so many ways to establish the Krishna Consciousness Movement, but he never complained because his policy was always everything for Krishna and nothing for himself. So that is why, as a service to Krishna, Srila Prabhupada was serving the devotees, because his ultimate goal was to bring them back to their eternal relationship with Krishna.

He was practically bathing them, feeding them and dressing them—teaching them how to live as human beings—so that ultimately he could bring them to the position where he could offer them for the service of Sri Krishna. And he never asked anything in return, never expected anything in return, so he was never disappointed.

And our temple was in a state where respect, honor, generosity, affection, consideration, etc. were at a low point. The real and tangible nature of what Krishna Consciousness is was not very evident in our Calcutta temple at the time. And so Srila Prabhupada called the devotees together to his room.

And one woman devotee was really upset; she was in bad consciousness, so she didn’t come to the room. Prabhupada immediately noticed her absence and said, “Where is such-and-such devotee?” And one brahmachari said something to the effect that she went off somewhere in a stew, or something like that.

Of course, she wasn’t far away; she happened to be across the street chanting her rounds by a lake that’s in front of the Calcutta temple. So anyway, he found her and brought her to the room. The mood was very sober, but Srila Prabhupada wanted to hear from everyone. He went around the room and asked each devotee what they thought was wrong in the temple.

And each person gave their realization, and everyone else listened to that realization. And then Srila Prabhupada spoke. He said that we were all here because he had followed the instructions of his Guru Maharaja and come to the West.

And he then added with great emphasis: “Do you think it was easy for me to leave India all alone and come to America?” And none of us had ever really thought like that—whether it was easy or hard. We had just assumed that he had done that by Krishna’s mercy.

Then he continued, “Do you think it was easy for me when I was in Butler, Pennsylvania, and I opened the refrigerator, and there was cat food next to my vegetables? Do you think that was easy?” And all the devotees almost began to cry, because they began to understand what Prabhupada did for us, and it wasn’t easy.

He came from a place where his mother was carried in a palanquin from one house to the other. He was from another culture, almost like another planet; and he yet came to the West with a trunk full of books and seven rupees.

Because I felt it was one of the weak things for me; if I had more determination I might be a devotee. So I wanted that then, and I want that now. So you’ll decide how much you want these things, but you can go very quickly to Krishna if you want them enough.

And you ask questions about how other people have them, and you study how you can get them. Because that place that you can go to, even while being in this Kali Yuga place, is so wonderful, so glorious. It’s what human life is meant for.