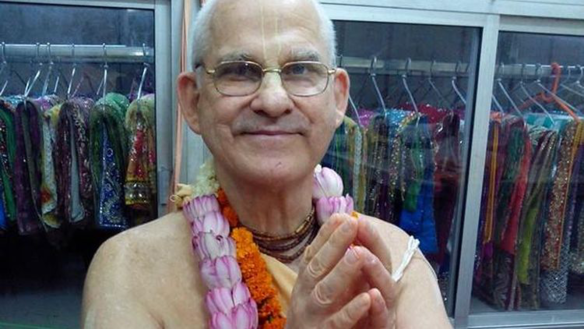 With deep sorrow, we would like to communicate to the global devotee community the departure of His Holiness Bhakti Madhurya Govinda Goswami Maharaja at around 6.00 AM on the 14th of November, 2020 due to a second cardiac arrest and complications arising out his surgery for cervical spondylitis and a cardiac arrest. He had been unwell for quite a long time. He was COVID-negative, when last tested a couple of days before being shifted from the hospital to the ISKCON Punjabi Bagh temple where he had been based out of for nearly fifteen years. An ICU environment with full-time attendants had been replicated in his room and Srila Prabhupada’s japa was going on.

Recently his spinal cord condition had worsened and three weeks back on Maharaja’s own preference, he was admitted to Rajiv Gandhi Cancer Hospital, New Delh for a critical surgery. The doctors had however warned us that there is a high probability of Maharaja being paralysed in the event of a surgery, even if successful, and so we ought to weigh both options and then decide.

His Holiness Bhakti Madhurya Govinda Goswami Maharaja was initiated by His Divine Grace A.C. Bhaktivedanta Swami Srila Prabhupada as Makhanlal Das in October 1968. He was one of Srila Prabhupada’s original 100 disciples, and started one of ISKCON’s first university preaching programs at the University of San Francisco, California. Later, he continued his university preaching at his alma mater, the University of California, Berkeley. He opened the ISKCON temple in Berkeley, California in 1969, and has managed several ISKCON centers in the U.S.

Bhakti Madhurya Govinda Goswami received sannyasa initiation in 2010, and has been based out of the ISKCON Punjabi Bagh Temple in West Delhi, rendering invaluable services and inspiring the devotees there. He was known for his energetic traveling and preaching in India and other parts of Asia, despite his advancing age and deteriorating health; and for his deep attachment to his Jagannatha and Nila Madhava deities Whom he carried everywhere.

We request your intense prayers to one of Srila Prabhupada’s dear disciples by praying to Lord Narasimhadeva and your respective local deities, that if They so desire, Maharaja may continue his eternal service to Srila Prabhupada as desired by him.