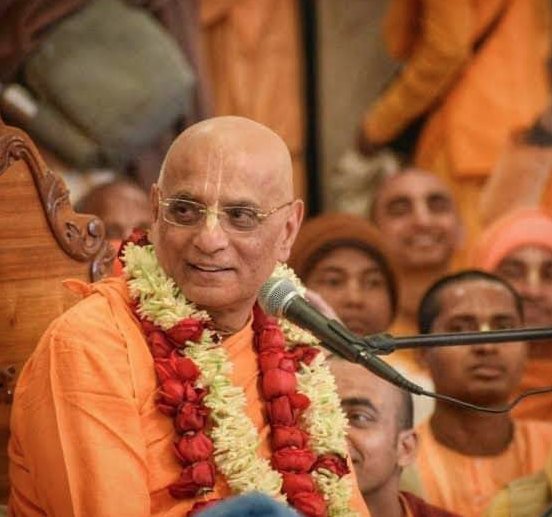 The last time we met was in the month of May, 2018, in California where we were both attending a Cow Culture Conference. It was the first time I was hearing from you about your project in Florida where you explained that in North America we must provide special facilities for cows due to the harsh temperatures. You had recently acquired 120 acres of land for that purpose close to Orlando. I was happy to hear of your initiative to help make more devotees become aware of the importance of cow care.

I had the good fortune of meeting you right there in Sridham Mayapur in the year 1976 as you often would reminisce with devotees whenever we would meet over the years. On that first day of your visit with Sarvabhavana prabhu, his wife Shubhangi and their infant Abhimanyu, you had come to take darshan of Sri Sri Radha Madhava and somehow, I happened to be giving the Bhagavad-gita class. First impressions, lasting impressions. You somehow found it most fascinating that a foreigner would be giving the class and you fondly carried that memory throughout your life.

Like all of us in Mayapur who met Bhakta Kishore in those early days we could all sense that here is a special soul sent to help Srila Prabhupada’s movement. Young Bengali devotees were rare in those days, especially educated Bengali devotees who spoke impeccable English. Within but a short few days, I remember how Satadhanya had announced that he was going to shave you up and he did; you thus became a full time new devotee practically on the spot. I remember thinking to myself, oh, this is too sudden, but I was proven wrong.

Your service to Srila Prabhupada is so illustrious. Such special mercy Srila Prabhupada showered upon you. From Bhakta Kishora, to Kishora Gopinath das to Bhakti Charu Swami, all within but a few months. Your entire life has been most exemplary and you are a testimony to Srila Prabhupada’s glorious and exalted position as a fully dedicated soul to his spiritual master Srila Bhaktisiddhanta Sarasvati Thakur Prabhupada and Lord Caitanya’s movement. It is difficult to express in words your contribution to Srila Prabhupada’s mission. It is truly awesome. Being empowered by Srila Prabhupada, during your devotional career you have touched the hearts of so many souls.

All of us, in particular your disciples, are devastated by your sudden departure but we know you are with Srila Prabhupada and Lord Krishna. May we all find solace in your exemplary qualities of humility, compassion, dedication, enthusiasm and total surrender to the orders of Srila Prabhupada. You will remain a beacon of that ideal Vaisnava Thakur whose nature, qualities and wonderful accomplishments will continue to attract the praise and inspiration of devotees for generations to come.

Thank you Maharaja and kindly forgive any offenses committed at your lotus feet.

Your servant in Srila Prabhupada’s mission,