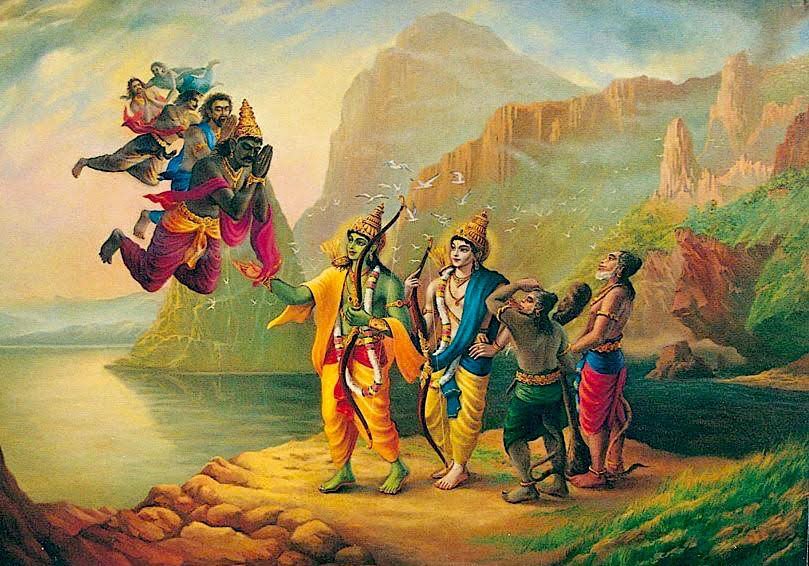 Can two persons be alike in all respects? No! Everybody is an individual with unique thoughts, aspirations, opinions, mannerisms and lifestyles. Although birds of same feather flock together, every bird is an individual and unique. There are differences even within one community of people with multiple commonalities, led by one able leader.

All the followers of a spiritual path have many things in common: (i) the object of their worship i.e., their beloved form of God, (ii) the aspiration and attempt to love and serve Him to the best of their ability, and (iii) the prescribed spiritual practices that enable them to achieve their spiritual goals. Despite these similarities in general, when it comes to minute details of spiritual practice, every spiritual seeker has a unique mood and style.

Devotees are not so faceless that they are fully same in all respects. Rather each one has a unique story. Humility, satisfaction, tolerance, compassion, gratitude, service attitude and many other such aspects of Vaisnava character are common in all devotees of God, yet each devotee exhibits those qualities in unique ways. For instance, the way one devotee renders service to God could be quite different from another’s way, although they both agree to the principle of service to God.

The following is an instance from the story of Lord Ramacandra where some of His dear devotees exhibited differences in their opinions in their sincere intent and effort to serve the Lord’s mission.

The king of demons Ravana abducted Sitadevi, the consort of Lord Rama, and held her captive in his golden city Lanka. Unlike lusty and proud Ravana, his younger brother Vibhisana was saintly and virtuous. Vibhisana advised Ravana repeatedly to respectfully return Sita to Rama, for otherwise Lanka would soon see its destruction due to the tears of Sita and wrath of Rama. But egoistic Ravana wouldn’t relent. Once he ruthlessly rebuked Vibhisana with harsh words condemning his non-cooperative attitude. Pained at heart, Vibhisana left Lanka and approached the camp of Rama, who was then making His preparations with the monkey army to battle with Ravana, seeking His shelter.

Seeing Vibhisana, Sugriva, the king of the monkeys became very suspicious. All the monkeys started picking up rocks and uprooting trees to attack Vibhisana if needed, and they awaited Sugriva’s orders. It is natural for devotees to always be eager and alert to the best of their physical and mental abilities, in their attempts to serve the Lord. The ever-wise devotee Hanuman, however, didn’t detect any deceit or ill motives in Vibhisana.

Vibhisana, of course, was free from duplicity and had no motive to harm any of the associates of Rama. He humbly spoke to Sugriva, explaining his intentions. But Sugriva was doubtful. And Hanuman, who had the ability to read the minds of people, understood that Vibhisana’s speech and expression were genuine and believed that he sincerely desired to assist Rama.

In this world, even a genuine person’s purity is suspected due to his or her background and association. Yet the good news is that God reveals their glory to the world sooner or later.

Sugriva approached Rama and said, “O Lord, a demon from the side of our enemies has arrived seeking Your shelter. He claims to have deserted Ravana.” Sugriva continued, presenting his opinion with a deep concern, “Yet, I think that he cannot be trusted. After all, he is a demon and must be a spy, who might attack us at the least expected moment.” Being highly suspicious, Sugriva added, “I suggest that Vibhisana be killed immediately!”

With a sincere intention to serve Rama, Sugriva was apprehensive and honestly felt that it was harmful to entertain Vibhisana. After all he was a Raksasa and further he was the brother of envious Ravana. Rama, however, didn’t give His verdict immediately. He asked the opinion of other monkey chiefs.

The monkeys replied, “Dear Lord, You are the knower of everything. Still You are inquiring from us just to honor us.” But none of the monkey chiefs like Angada, Saraba, Jambavan, Mainda etc could trust Vibhisana. They either partially agreed with some condition or disagreed to welcome Vibhisana. Ultimately, they all were concerned about what best serves Lord Rama’s interests.

Then wise Hanuman gave his opinion, “Vibhisana’s pleasant demeanor, mindful speech and facial expressions reveal the honesty of his purpose. A deceitful person cannot remain so composed. It is not possible for anyone to fully conceal his inner intentions. I think Vibhisana came here in all sincerity and should be accepted as our ally.”

Hanuman knew the fine art of speech and Lord Rama was pleased by the eloquent and mature words of Hanuman. But Sugriva objected, “Since Vibhisana has deserted his brother in the time of adversity, he could betray anyone.”

Although Sugriva and Hanuman had opposite opinions, they both had the same intentions and a pure purpose of serving Lord Rama to the best of their understanding. Sugriva, with all his intelligence thought that not welcoming Vibhisana would help Rama better. Hanuman, with all his wisdom and sincerity, felt the opposite. So, the difference of opinion amongst devotees doesn’t always indicate a difference in their motives and purpose.

Finally, Rama said, “I believe that Vibhisana has genuinely rejected Ravana. Let’s welcome him as our ally.” Still not convinced, Sugriva meekly protested, “He may have been sent by Ravana. If we accept him, he may turn on us at any moment. To be safe we should capture and kill him.”

Rama understood Sugriva’s anxiety. He smiled and reassured Sugriva, “Do you truly think this Rak?asa could harm Me? With the mere tip of My finger I could kill all the Rak?asas and demons.” Emphasizing on the importance of protecting the surrendered, Rama said, “The scriptures state that an enemy who arrives with folded hands must be protected by all means.” As the all-merciful Supreme Lord, Rama said, “Moreover, it is My solemn vow and eternal principle that if anyone takes shelter of Me, even once, saying, ‘O Lord, I am Yours,’ then I award that person freedom from all fear. What to speak of Vibhisana, even if Rava?a were to come here to surrender unto Me, I would give him all protection.”

The Supreme Lord doesn’t refuse to accept a supplicant who sincerely seeks His shelter. While egoistic demons abandon their own people as enemies, God and godly people accept even so-called ‘enemies’ as their own friends.

Upon hearing Rama’s sublime statements filled with mercy and sensitivity, everyone was fully satisfied. Sugriva’s heart became melted with love. Although Rama didn’t approve Sugriva’s opinion or analysis, Sugriva wasn’t offended. Moreover, he was impressed with the Lord’s kindness. Ultimately what Sugriva wanted was to serve and please Rama, but if welcoming Vibhisana pleases Him the most, why wouldn’t Sugriva do that? With tear-filled eyes, Sugriva said, “O Lord, Your words and deeds are always just befitting Your supreme position. Let us invite Vibhisana in our company and make friendship with him without delay.”

Srila Prabhupada writes, “Everyone should be friendly for the service of the Lord. Everyone should praise another’s service to the Lord and not be proud of his own service. This is the way of Vaisnava thinking, Vaikuntha thinking. There may be rivalries and apparent competition between servants in performing service, but in the Vaikuntha planets the service of another servant is appreciated, not condemned. This is Vaikuntha competition. There is no question of enmity between servants. Everyone should be allowed to render service to the Lord to the best of his ability, and everyone should appreciate the service of others. Such are the activities of Vaikuntha. Since everyone is a servant, everyone is on the same platform and is allowed to serve the Lord according to his ability.” (7.5.12 Purport)

The Lord is bhava-grahi, or one who accepts the mood of His devotees. The attitude of service is more pleasing to the Lord than the magnitude or type of service.  Different devotees may be capable and experienced in a service in different ways. But any devotee who tries to sincerely serve the Lord certainly attracts His mercy.

In this case of welcoming Vibhisana, Hanuman’s approach was proved to be better than Sugriva’s way. But sometimes different ways of doing a service could be equally valid and beneficial. It could just be a matter of individual choice rather than an absolute superiority or inferiority of one of the ways. For instance, one could offer either a rose or a jasmine to the Lord with love. It is often a matter of preference of the devotees rather than a comparison between the two flowers. Sensible devotees do not argue with each other to prove that their favorite flower is always the best of the two!

And according to their psycho-physical natures, different devotees prefer to do different services, all with an intent to please the Lord. Some devotees are in a profound missionary spirit, being deeply inspired by the compassionate mood of acaryas, and get involved in preaching of spiritual science. And some devotees who have deep taste in chanting the Lord’s holy names and are gifted singers, are more engrossed in the congregational chanting or sankirtana. Some others are enthusiastic about building temples as centers for spiritual education. And yet others are deeply absorbed in the loving service of the Lord’s deities. That is the varigatedness of spiritual life.

There may be diversity in the tastes, styles and opinions of devotees, but there should be unity in their purpose and intention to serve the Lord. Srila Prabhupada writes, “Actually, in Krsna consciousness there cannot be two opinions. There is only one goal: to serve Krsna to one’s best ability. If there is some disagreement over service, such disagreement is to be taken as spiritual. Those who are actually engaged in the service of the Supreme Personality of Godhead cannot be disunited in any circumstance. This makes the Supreme Personality of Godhead very happy and willing to award all kinds of benediction to His devotees.” (Bhagavatam 4.30.8 Purport)

If the differences of opinions, however, are egoistic and not based on sincere intentions to serve the Lord, they could lead to disunity amongst devotees. Srila Prabhupada writes, “Disunity between individual souls is so strong within this material world that even in a society of Krsna consciousness, members sometimes appear disunited due to their having different opinions and leaning toward material things.” (Bhagavatam 4.30.8 Purport)

Thereafter, Lord Ramacandra and the monkey chiefs heartily welcomed Vibhisana, who then fell flat at the lotus feet of Rama. With deep gratitude and in a mood of full surrender, Vibhisana said, “Dear Lord Rama, I have abandoned my home, family and possessions to serve You in unalloyed love. I now place my life in Your hands and beg You to bless me with Your causeless mercy.” Rama gracefully accepted Vibhisana and Vibhisana gratefully joined Rama’s company.