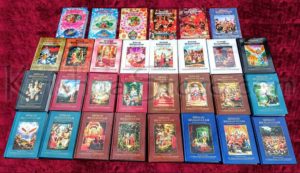 One Prabhupada saying that often lingers in my ears is “It is better to chase the rhinoceros. If you fail, no one can say you have failed – everyone knows you cannot capture a rhinoceros, But if you succeed, they will say he has done the impossible.”

During last year’s lockdown, my wife and I were pondering how to reach out to the community in Longmont, Colorado, with Prabhupada books. We happened to see little house-shaped structures full of books on the front lawns of houses in our neighborhood. Thinking that these would be nice altars for Prabhupada books, we peeked inside. They contained books of fiction, science, romance, health, and travel. There were  also children’s books, but we didn’t see any spiritual books, so we thought of placing there a Bhagavad-Gita and small books by Srila Prabhupada.

During our attempt, by the Lord’s mercy, the landlady came out, and encouraged us to put Bhagavad-Gita and other books in that library. Further, she said, “In fact, we have been looking for such books. They help us to feel solace, strengthen our mind and heart, and develop community bonds with people of all ages in the neighborhood.”. We placed the books we had with us and later returned with more of Prabhupada’s books. When we returned, by then the landlady was reading Bhagavad-Gita As It is sitting on her porch, and the other three books were gone. We were very enthused that people are appreciating Prabhupada’s books, so we started filling all the Little Free Libraries in our neighborhood.

We made sure that every library had a copy of Bhagavad-Gita and three to five small books. Out of curiosity, we revisited all those libraries. When we saw that all Prabhupada books were gone, we wondered whether they were thrown out or people took them to read. With mixed feelings we peeked into another library and saw a request note for a personal copy of Krishna book and in another library a note on a Bhagavatam copy: “Next volume, please.” People were appreciating Prabhupada books, and with redoubled enthusiasm, we placed a Krishna book in a gift wrap, and the first Canto of Bhagavatam in those libraries and thought of extending this to neighboring towns.

We wanted to extend the distribution beyond our neighborhood to the school district, county, etc. But how is that possible? I recalled the quote above in my mind, continued to extend this activity and reached out the community for their help. By the mercy of guru and Krishna we have received amazing responses to this activity. Fellow Coloradans have been supporting this activity by donating cases of Bhagavad-gitas and other Prabhupada books. And so far (in 18 months) we have distributed 7000+ books in Little Free Libraries and covered almost all Little Free Libraries located within a 150-mile radius of our hometown. Now we are planning to distribute books to all of Colorado.

The interesting thing is we have located almost 95% of the mapped little libraries, yet we placed books in 105% of them. Meaning, we didn’t find some in listed routes and found a few that weren’t listed. While filling the libraries, our consciousness was purified (any connection with Krishna is purifying) and turned into compassion for the people living in those areas. We no longer felt that those are Little Free Libraries. We felt each library is the heart of all the souls of the neighborhood, and the whole community has set up an altar for Prabhupada and were blessed with an opportunity to have the vani association of Prabhupada. While doing Little Libraries, we didn’t feel that we were missing other routine activities, in fact, we were able to accomplish other routine tasks as well, indicating that when we utilize the time in Krishna’s service, it favors and expands for us because time is Krishna.

The entire devotee community in our town is being surcharged with enthusiasm and fervor for book distribution. The mantra for the marathon is “Double it”.

I take this opportunity to share the following few lines to enhance the mood of book distribution.

Brihat-mridanga ’the great drum’ – A phrase coined by Srila Bhaktisiddhanta Sarasvati Thakura; refers to the power of the printing press—as its sound (books) can be heard all around the world.

Transcendental book distribution was started in the mid-16th century when Narottama Dasa Thakura, Srinivasa Acharya and Shyamananda Pandit traveled to Bengal and elsewhere with the writings of the Six Goswamis of Vrindavan.

A couple of centuries later the great acharya Bhaktivinoda Thakura had the foresight to predict the appearance of Srila Prabhupada, his future activities and that the chanting of the holy name will be heard and practiced in all corners of the world (Russians, Europeans, and Americans).

Our predecessor acharyas, beginning with Lord Sri Krishna Chaitanya Mahaprabhu Himself, through the six Goswamis, to Narottama das Thakura, to Bhaktivinoda Thakura to Srila Prabhupada, has given us the secret of how to multiply this process many times. That is the brihat mridanga.

The Bhagavad-gita, the Srimad Bhagavatam, and Chaitanya Charitamrita, and even magazines with extracts from these spiritual books, are generally read and appreciated by many different generations of people throughout the course of time. The glorification of the Lord is thus heard and performed by the many different people who read and re-read them. Hence the sound of the great drum is heard far and wide.

Prabhupada stressed preaching, particularly book distribution and harinama, because as Srila Bhaktisiddhanta pointed out, books are the Brihat mridanga. Prabhupada said: “If you sell a book to someone, that is better than your speaking to them—what will your three minutes’ preaching do? But if they read a book it may turn their life” (SPL to Brahmananda, November 3rd, 1972). He would cite many instances of people becoming devotees in countries without a devotee presence simply due to the books going there. In that manner he said the books can reach places the devotees cannot even go.

Prabhupada said “More than anything I want that my students should distribute my books and literatures profusely all over the world” (SPL to Sridhama dasa, November 17th, 1971).

So now that this world deliverance mission has been passed down to our hands we must take it very seriously. Let us beg Srila Prabhupada and Krishna that by their combined mercy we may be able to finish this work of delivering the entire world from the stringent clutches of this material existence.

We were so thankful that we’d been chosen for this very special service, but our inner glee was tempered by the feeling that this was, after all, just Krishna’s plan unfolding. Everyone is looking for Bhagavat Gita As It Is. Some doesn’t realize that they are, but they are.

Yes, do it, if you are so inspired and can do it. Every effort to help Srila Prabhupada’s mission is appreciated. Book distribution is a dual service to the Lord – smaranam and service – thinking of the Lord while distributing books. You may get started distributing to the Little Free Libraries in your area and Krishnaize it.

Krsna is bound to fulfill the declaration of his devotee.