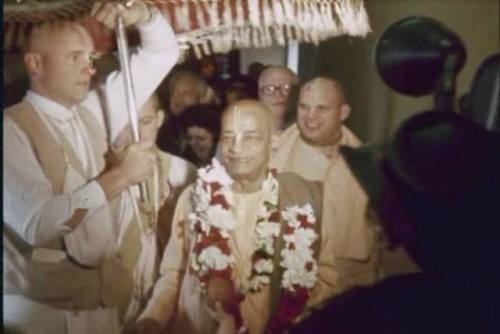 Jayananda would often show a playful mood. He wasn’t just all work and no play. He would often say things and do things that reminded us that service to Krishna was fun and spontaneous, and just as Krishna has an amazing sense of humor, so do His devotees have a lively sense of humor.
There’s an old-time devotee here in New Vrindavan, very nice devotee, named Brikasanga das. As Jayananda had many devotees who assisted him, sort of being like Jayananda’s sidekicks, like Murli-Krishna and Indranatha, also Brikasanga was fortunate to spend much time with Jayananda as his sidekick, as I was also fortunate to have association with Jayananda for about a year. Whenever Brikasanga and I meet, in or around the temple, here in NV, we always hug and remember how it was, reminiscing on Jayananda and our luck of being close to him for a period of our lives. Brikasanga remembers the time when Jayananda and I were in the garage, next to the temple in San Francisco, and Brikasanga came in, and Jayananda introduced me to him, saying Brik was his old godbrother, and how they did so much service together. I barely remember that scene. Brikasanga also traveled with the Radha-Damodara sankirtan party, with Visnujana’s bus.
Well, Brikasanga told me one time how he and Jayananda went up to Sebastapool, to the farm owned by Naranarayana’s father, who donated fruit and milk from his land and devotees went there often. There were some cows there, and he and Jayananda went to get some cow dung for a festival, I think it was Govardhana Puja. After collecting some cow dung, Jayananda and Brikasanga went to Sausalito and ran into a kirtan party there. Jayananda snuck up on them and started tossing cow dung around the party, maybe hitting a few devotees. Well, the devotees at first got real mad, thinking some non-devotees were attacking them with stool. Finally, they realized it was Jayananda and Brikasanga, and they got blissful and did some return fire in the mock skirmish.
I find this story to be very funny, and I can just imagine what the other people were thinking as they watched this scene. What they must have been thinking when the devotees were first mad, and then happy to have dung thrown at them? Only devotees can understand these transcendental events.