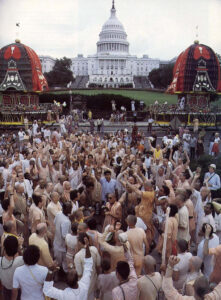 Yesterday on inauguration day, I thought of Srila Prabhupada’s appreciation of America. Tamal Krishna Goswami came in with Prabhupada’s green card and said, “Prabhupada, America is waiting for you. Customs is ready; immigration is ready. Everything is cleared.” Prabhupada began to cry. “I am so indebted to America,” he said. “America has given me so much. It’s given me men, money. I am so indebted.”