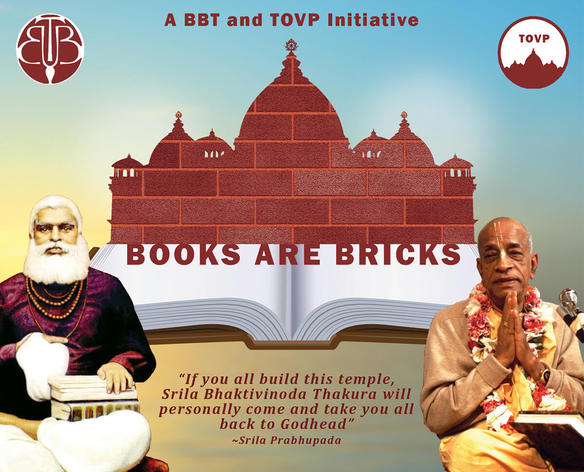 In 1971, as a young devotee in Calcutta, Giriraja Swami approached Srila Prabhupada, “I have been trying to understand what your desire is, and two things seem to please you the most: distributing your books and building the big temple in Mayapur.” Prabhupada’s face lit up, his eyes opened wide, and he smiled, saying: “Yes, you have understood. If you all build this temple, Srila Bhaktivinoda Thakur will personally come and take you all back to Godhead.”

Now that’s quite a statement from Srila Prabhupada! Building the TOVP was so important to him (and our acharyas) that he categorically stated, “You have understood”, and if you build this temple, “Srila Bhaktivinoda Thakur will personally come and take you all back to Godhead.” And hand-in-hand with the TOVP is book distribution. What more can be said? These statements are an indication of the heart and soul of Srila Prabhupada, our Founder/Acharya and most merciful master. Along with developing our love of God, which was his prime desire for us personally, fulfilling these two desires of his in the preaching mission are the cornerstone of pleasing him.

It may be unknown to many devotees, including those who actively distribute his books full or part-time, that for every book which is bought from the BBT and distributed to some fortunate conditioned soul, a percentage of that income to the BBT goes directly to temple construction as per Srila Prabhupada’s direct instruction:

“I specifically formed the BBT to invest in it exclusive rights for the printing of all literature containing my teachings, writings and lectures. In this way the collections are to be divided fifty percent for printing new books and fifty percent for construction of temples.”

Several years ago the BBT Trustees unanimously decided that the importance of building and completing the TOVP exceeded the needs of any other temple construction project, and agreed to continue to remit annual funds for TOVP construction until the year 2022 when it is scheduled for completion. This landmark commitment by the BBT heralded the start of an unannounced pledge by the BBT to help build the TOVP through funds generated by book distribution. And every book distributor in the world was now an unsung hero in the “Raising of Lord Caitanya’s temple by the hands of every devotee.” To date the BBT and BBTI have given the TOVP over $2 million!

So, remember the Books Are Bricks Campaign for the next two years to the Grand Opening of the TOVP in 2023, and get the mercy of Srila Prabhupada and Srila Bhaktivinoda Thakur. They will personally come and take you all back to Godhead.