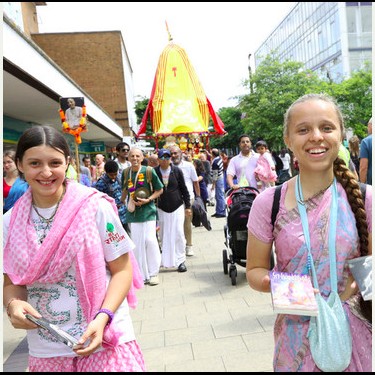 Hare Krishna, dear devotees! My name is Radha, I’m 19 years old and I am a student in my final year at Sri Mayapur International School. I want to share with you my incredible experience of book distribution in London this summer. I hope that it will please the senior devotees and reassure them that book distribution is still alive and well. And I hope it will encourage all the devotees of my age to give it a try.

Here is how it started: for a long time I had wanted to feel myself like a real, active preaching brahmacarini from Srila Prabhupada’s time. Last year, my Bhakti Shastri teacher, Prabhupada Priya Mataji, a seasoned book distributor, and her husband, Yajna Murti prabhu, took a group of girls to London to try distributing books. Sadly, I was not one of them. But this year, by Krishna’s grace, I got the opportunity. Prabhupada Priya mataji and Yajna Murti Prabhu were very kind to me. They didn’t just agree to take me with them but also helped me in many ways to make this trip possible. My parents also kindly allowed me to go, even though they were quite worried about me.

It was really one of the best times in my life! We stayed In the temple, had bombing harinams, amazing prasadam, association of wonderful devotees and most importantly the unforgettable experience of feeling oneself like an active member of Srila Prabhupada’s movement. Six days of the week we would go out on book distribution, each day to a different place. In that way we also got to see a lot of London. On our “rest” days, we did other amazing things: once we visited Bhaktivedanta Manor, another day we did a pilgrimage guided by Jaga Mohini Mataji of all the places in London where Srila Prabhupada went, and another day we went to Crawley Ratha Yatra. Then there were the Saturday night harinams.

Yes, harinam in London is awesome! You know London is the place where things really happen. And when we were out there we were proud to represent Srila Prabhupada to the whole world. We danced and danced and danced… Many random passersby got swept along and joined the fun, enthusiastically trying to sing along and copy our dance moves. Although, we didn’t know each other at all, we would dance and sing together like brothers and sisters. At one point, Prabhupada priya Mataji’s knee started hurting from all the dancing and Krishnabhava was very tired so they had decided to go back to the temple. But the problem was that they just couldn’t stop! Somehow they stayed til the end. Then, absolutely tired but blissful, we all returned to the ashram in the temple of Sri Sri Radha Londonisvara – the most beautiful deities who stole our hearts and blessed us with inconceivable mercy.

Staying in the ashram was a lot of fun. It really gave a feeling of leading a surrendered life. It felt special to stay in that same room where the previous acaryas – bramacarinis like Prabhupada Priya mataji – had stayed when they were new devotees. All our time was fully busy with service to Krishna. Literally every step was a dance and every word was a song! Each morning we would have such a long singing program. Then, wherever we would go with a lot of devotees we had to have a harinama on the way. In this way, we would end up singing the holy names and dancing all day!
I tell you Prabhupada Priya mataji, Subhadra and Krishna Bhava are truly fun to be with! They have great devotion for Srila Prabhupada and they are very serious about serving Krishna. At the same time, they are so jolly – somehow they find something funny about everything, literally. I felt so comfortable and at home with them.

The morning program, the class, the prasadam… these were our inspiration which would recharge our batteries before going out. And then we would pack our trolley with books and hit the streets, carrying the memories of the morning program and the mangal sweets with us.

At first, I was worried about how the posh London people would respond to me, a simple Russian girl, but when I got there I found them very open and friendly, though often very busy. The most funny part was how London people would address us as “darling” “babe” and “love.” I was a bit shocked at first and thought it was not very polite but later got used to it. I would say, “Excuse me” and they would say, “What is it darling?” or they would say, “No!” Once I approached one girl and she responded with a vehement “No!” So I got frustrated and said, “Do you even know what you are saying no to?!” “No,” she mumbled, ‘what is it?” In the end, ironically, she gave me a donation and took a book!

Sometimes the books would get distributed almost effortlessly, and sometimes they wouldn’t, no matter how hard I tried. So Krishna really made me understand who’s the boss. Although I am not quite sure how much I learned to surrender to Krishna, I can tell you one thing with confidence: being not surrendered is tough. You try to make people take the books. You try this way and that way – being nice, smiley, pushy and blocking the way, you can be super friendly, but if Krishna doesn’t want they just won’t take it. But if you simply and humbly just accept that we are not the controllers, then it is much easier.

We would get all kinds of people. Some would say, “Good job, keep going!” Others would shout, “ We just want you to go away from here!” Some people would support us and appreciate our work and others would say, “It is voodoo and mumbo jumbo.” Some would run up to us and say, “Are you the Hare Krishnas? Here is donation. Can I have a book?” Others would mumble, “I hope you are not any religious organization like the Hare Krishnas.” Two ladies once told Mataji that she was an angel. And another lady told me that religious organizations like Hare Krishnas are coming from the devil. These were the opposing opinions we would face – complete extremes. But both were good because even when they blasphemed us they got purified. And it also taught us to be tolerant and patient.

Sometimes people would get very excited about the book and that was so pleasing to the heart. Like once I gave The Science of Self Realization to one Brazilian girl. She loved science and got so excited that she even gave me a hug. Another time, after I gave a book to a group of teenagers they shouted, “We got a book!” and two girls had a high-five. Then they opened it and started reading it out loud. It was really Srila Prabhupada’s mercy.

It was super fun to try new crazy things out. One time when I was lacking two pounds to make one hundred pounds for the day, me and little Krishnabhava ran down to distribute one more book for two pounds. I was very happy that day and I ran around smiling and laughing and approaching people in funny ways. Finally I got one person to buy a book by begging him, “Please! Please!” I acted so silly that he finally had pity on me and gave up. Ha ha ha! I never knew that this could work…

Even Krishnabhava distributed books although she is only 12. She would do especially well on harinama. She is also a very good cook. And while staying in the ashram she helped her father cook mangala sweets for Sri Sri Radha Londonisvara so that they would get pleased and bless us to distribute more books. Seeing her devotion, I started really appreciating how Vaishnava kids naturally have this devotion for Krishna deep within them, even though we may not always notice it.

I think book distribution is the most essential part of our society. Srila Prabhupada has given us so much and we are all so indebted to him. Book distribution is a tiny way by which we can make him happy. And when you know that Srila Prabhupada is pleased, you feel so satisfied, like you have really achieved something. It gives you a peaceful mind, a feeling of having your duty completed, and after that you sleep very well.

Just think about it -when we are out there we are face to face with Maya. The difference between devotees and non-devotees is seen very clearly. Wouldn’t it make you believe more in our process in Krishna consciousness and be proud to be a part of it? Let us challenge Kali-yuga! We are not scared of it when we are under the shelter of Srila Prabhupada. In fact, I would become so confident and secure about my position that I was ready to do anything for Srila Prabhupada.

Maybe it is because by nature I have some passion in me and when by Prabhupada’s grace I have an opportunity to utilize it properly in the mode of goodness then I get very excited. I think that many teenagers have got a lot of energy and passion. And many don’t know where to utilize it. So here is the answer: try out book distribution. Trust me, you won’t regret it! You will make Srila Prabhupada happy, you will have fun yourself, you will help many conditioned souls. You will be proud to step up and say, “We are a servants of Krishna!” We are eternally related to Him and to each other. Therefore let us get together and flood this world with Lord Caitanya’s mercy! 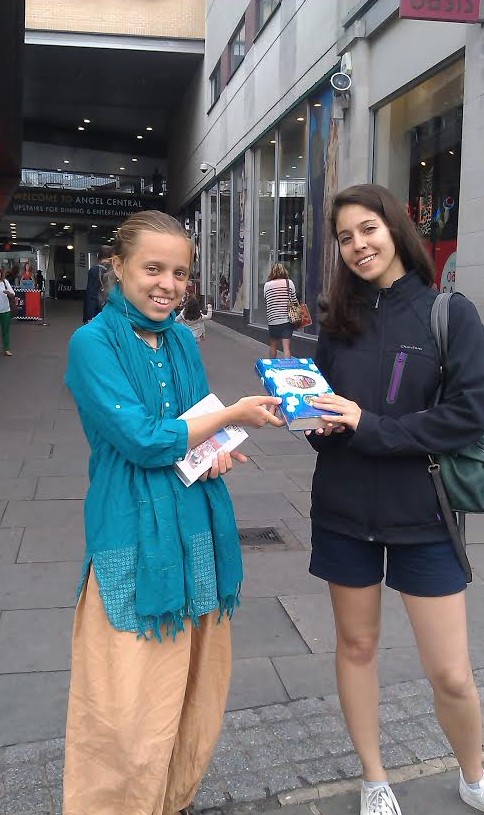