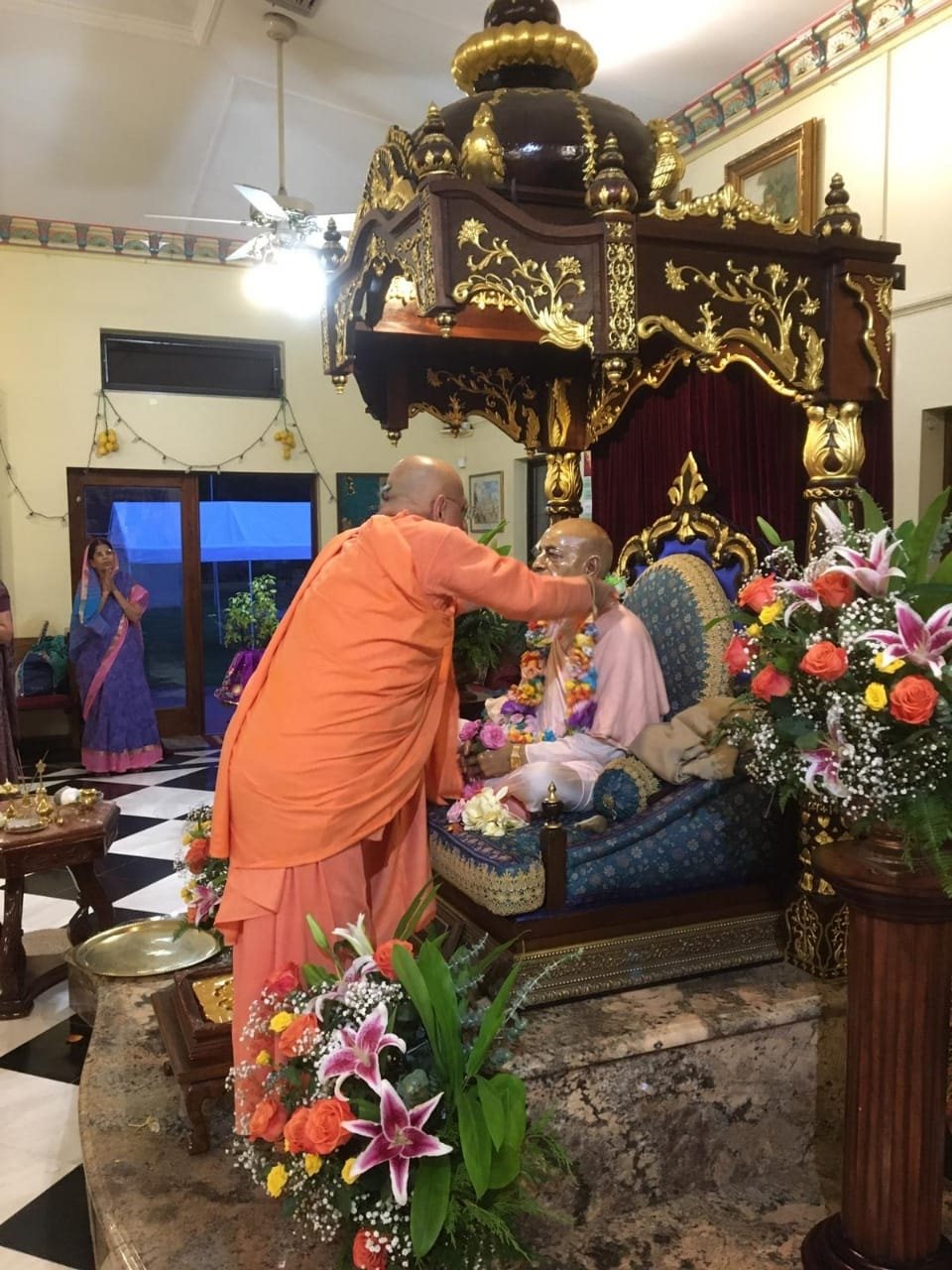 Since writing my tribute to His Holiness Bhakti Charu Swami Maharaja, I’ve read so many beautiful memorials that eloquently glorify his exalted, excruciatingly sweet personality, his softhearted dealings, his vast knowledge of scripture, his tremendous accomplishments, the pure devotion he had for and intimate personal service he rendered to Srila Prabhupada considering the short time he spent with him, and so on. Then I remembered the foreword he wrote to Srila Prabhupada the Founder-Acaraya of ISKCON and how influential Maharaja was during its inception.


As I reread this beautifully written piece, I realized how profoundly it enshrines Srila Bhakti Charu Swami’s loyalty and dedication to Srila Prabhupada’s ISKCON and perhaps His Divine Grace’s most important instruction that the test of our love for him will be shown by how well we co-operate to keep ISKCON together.


This GBC foundational document, Srila Prabhupada the Founder-Acaraya of ISKCON, is meant to be read again and again and implemented. My hope is that by reading its Foreword at this time of intense remembrance of Maharaja, all of us followers of Srila Prabhupada, especially our esteemed leaders, will feel inspired to revive the spirit contained in its pages and bring it forward again into the forefront of consciousness of ISKCON’s devotees. This will be a fitting expression of our love for Srila Bhakti Charu Maharaja.


Now I’ll let His Holiness speak for himself:


Srila Prabhupada was undoubtedly the personality sent by Sri Caitanya Mahaprabhu to fulfill His prediction: “I have incarnated to inaugurate the sankirtana movement. I will deliver all the fallen souls of this world. . . In every town and village of the world, the chanting of My Nam Sankirtan Movement will spread” (Caitanya Bhagavata, Antya 4. 120, 126).

To understand Srila Prabhupada’s unique role in Gaudiya perspective, we must journey back in time and gain historical insight of how Caitanya Mahaprabhu’s plan to fulfill His prediction is gradually unfolding.

Upon His return from Gaya, Sri Caitanya Mahaprabhu began His nama-sankirtana mission. And in distributing nama prema, “He and His associates did not consider who was a fit candidate and who was not, nor where such distribution should or should not take place. They made no conditions. Wherever they got the opportunity, the members of the Pasca-tattva distributed love of Godhead” (Caitanya Caritamrita, Adi-lila 7.23).

This flood of nama prema swelled in all directions and continued to benedict this world under the shelter of empowered preachers like the Six Gosvamis, Srinivasa Acarya, Narottam Das Thakur and Syamananda Prabhu.

Unfortunately, after the disappearance of Sri Caitanya Mahaprabhu and these empowered associates of His, a very dark age descended on the world of Gaudiya Vaisnavism. By Kali’s influence, many apasampradayas, deviant sects,

totally eclipsed Caitanya Mahaprabhu’s pure presentation of Krishna Consciousness with their unscrupulous, materialistic doctrines and practices. And they did that in His name! Soon, His teachings came to be identified with immorality, dogma and anti-social elements. As a result, the cultured and educated people of Indian society developed a deep aversion to Caitanya Mahaprabhu. This dark age continued for almost 250 years.

Gaudiya Mission. Within fifteen short years, Bhaktisiddhanta Sarasvati Thakura spread Caitanya Mahaprabhu’s sankirtana movement all over India and attracted many luminaries of that time to assist him in his mission. Sixty-four mathas dedicated to propagating Caitanya Mahaprabhu’s teachings were established in India during this time.

Bhaktisiddhanta Sarasvati Thakura recognized the impor- tance of his institution for continuing vigorous preaching after his departure from this world. He emphatically and very openly instructed his leading disciples that his Gaudiya Mission be managed and maintained by a Governing Body. Surprisingly, he did not nominate anyone as his spiritual successor. He left this world on 1st January, 1937 and almost immediately dissension and quarrel arose within the Gaudiya Mission. Very soon the institution which had always been known for pure and bold preaching of Caitanya Mahaprabhu’s teachings became famous for its embroiled fractions and court cases. Two contending factions fought for acarya-ship and many senior disciples left the institution in disgust. The unified entity of the Gaudiya Mission as an all-India entity consisting of many centers, several presses and thousands of devotees working cooperatively under unified leadership ceased to exist. Illusions of proprietorship and prestige eclipsed Srila Bhaktisiddhanta Sarasvati Thakura’s order, and his mission—to develop a worldwide movement for propagating Caitanya Mahaprabhu’s teachings—came to a grinding halt.

Our Srila Prabhupada, His Divine Grace A. C. Bhaktivedanta Swami, was heartbroken by this tragic turn of events, but it was very evident from his activities that he perfectly understood his spiritual master’s heart and mission:

1. As soon as a few New York followers took his message to heart, he legally incorporated his institution. He named it the International Society for Krishna Consciousness and also legally stated its seven purposes. This all happened as early as 1966.

3. To secure ISKCON as a transcendental mission with a strong philosophical and culture base, he tirelessly and meticulously translated and commented on the most important and sublime of Sri Caitanya Mahaprabhu’s teachings in the form of Bhagavad-gita, Srimad-Bhagavatam and Caitanya-caritamrta. And he emphatically said that his books are the basis of his Krishna Consciousness movement and the institution of ISKCON.

4. And, like his Guru Maharaja, he did not name or select a successor for his ISKCON, rather, he wanted his disciples to collectively manage the institution through a Governing Body.

When I was Srila Prabhupada’s personal servant, I noted many times that he would insist that on any printed material the title Founder-Acarya and his full name be printed under the society’s name of ISKCON. I was very immature and inexperienced at that time and often wondered, “Srila Prabhupada is such a humble and exalted Vaisnava, why is he so persistently insisting on this?” I did not ever openly express this to Srila Prabhupada, but it continued to perplex me. But slowly, by his divine grace, in due course of time, I began to understand his intent. The phrase “Founder-Acarya” is not just a title but a transcendental system intended to protect, preserve and give longevity to an institution dedicated to the mass liberation of conditioned souls all over this world in this dark abysmal age of Kali.

Obviously, full implementation of this system in ISKCON is crucial to the successful fulfillment of Caitanya Mahaprabhu’s prediction. I shared this realization with a number of my senior god-brothers and was enlivened to find that Srila Prabhupada had blessed them with the same insight.

Then, in 2006, the GBC body formed various committees to plan and achieve different strategic objectives. One such committee is the Srila Prabhupada Position Committee (SPPC), whose mission is to assist the existing efforts and develop new initiatives to eternally establish Srila Prabhupada as the Founder-Acarya of ISKCON and the pre-eminent siksa guru for all ISKCON devotees. This book is an initiative of the SPPC.

His Grace Ravindra Svarupa Prabhu, who is undoubtedly one of ISKCON’s most brilliant thinkers and writers, wrote the book and all the GBC members and many senior devotees have seriously and diligently scrutinized it.

This book is thoroughly researched and based on sastra and historical facts. It is academic in nature and provides a foundation on which we can build a holistic culture of education meant to firmly and very practically establish Srila Prabhupada’s position as the Founder-Acarya of ISKCON. Of course, pure Krishna Consciousness acknowledges no technique—its only base is humility and absolute surrender. And it is in this mood that we offer this publication to Caitanya Mahaprabhu, Srila Prabhupada and all his devotees.

Kindly note that this book is not meant for casual reading but for implementation. If we do that, our personal and collective relationships with Srila Prabhupada will flourish unlimitedly and we will come to very practically understand that our beloved Founder-Acarya is not frozen in time. He is an eternal assistant of Caitanya Mahaprabhu’s divine flood of compassion and Krishna prema. And his heart melts and flows without restriction or impediment to anyone and everyone who shows the slightest interest in his teachings and the nama- sankirtana mission.

We humbly seek your kind and active support in imple- menting the next important step in Sri Caitanya Mahaprabhu’s plan to flood the entire world with Krishna prema—to firmly and very practically establish Srila Prabhupada as the Founder- Acarya of ISKCON for all time.

Yours in the service of Srila Prabhupada,