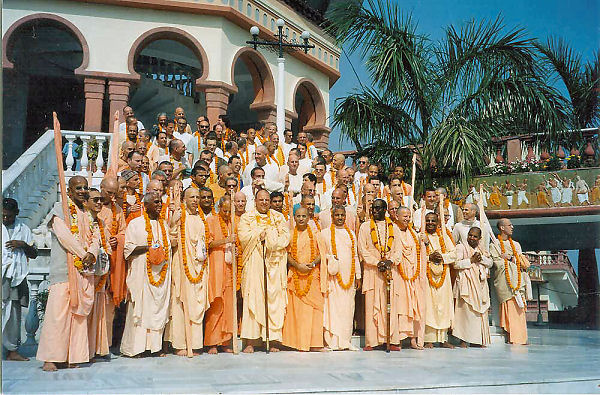 It seemed as if time had paused on Thursday 7th April to witness an historical event where two extreme ends of the world met for a fusion of the material to the spiritual. His Holiness Radhanath Swami was invited as key note speaker on behalf of the Euro CEO of HSBC to address a large gathering of high profile influential bankers along with the Group Manager of the Board on the topic of universal equality.
Organised by the Vedic Society in HSBC, over 830 bankers congregated together at the global headquarters of HSBC in Canary Wharf UK to explore the message of Holi - 'The Festival of Colours' symbolising the message of universal equality despite being diverse materially.
With a presence in over 87 countries, managing in excess of $2.5 trillion, HSBC is amongst the top universal banks, the largest listed company on the London Stock Exchange and according to Forbes the eighth largest company in the world.
Beatrice Giglio, one of the finest statisticians in Europe remarked: "I found my eyes constantly filled with tears as I heard and experienced the purity and finest examples of saints in my life. It was a lifetime moment." In Hospitality, thrilled at meeting His Holiness, Gill Smith remarked how she felt an overwhelming sense of peace and strong spirituality in his every gesture.
"With the smile of innocence I felt that he penetrated my soul while looking into my eyes. It was mystical." Top physicist Visieu Lac felt he gained wisdom from an ancient voice despite being a multi PhD and M A post graduate.
"I have never met someone so tranquil and seemingly perfect in theory and practice even though I was with him for only a few hours. We discussed metaphysics as the irrefutable result of an in-depth study in physics. I found him extremely approachable. To my utter surprise despite meeting him a few hours earlier, towards the end of the evening when he noticed me he came over extended himself and embraced me. It was a very warm and loving gesture for a scientist."
Comparing His Holiness to the living Buddha, mathematical genius Seth Aslin felt a deep spiritual experience that was until now known only on paper. Amongst many, he is enthusiastic to continue his spiritual journey. Michael Connor, hosting the event ecstatically shared: "As I greeted him with joined palms he came over clasped my hands and beamed straight into my eyes. I felt as if he was reading me. Oops! I found him to be a bundle of joy, bliss and deeply enlightening. I cant wait to take up his offer for a tour of India!" Hundreds of colleagues commented on the depth and joy in the speech by His Holiness.