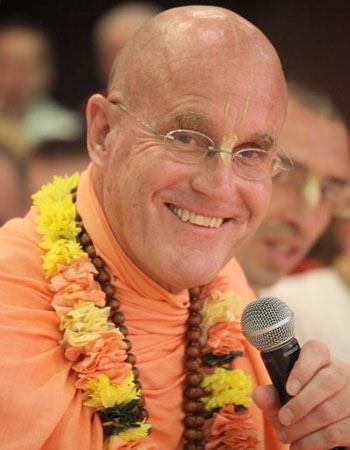 I was remembering this evening one incident about how merciful Lord Caitanya is to even the most fallen, sinful rascals. As Prabhupada mentions, Jagai and Madhai?they were not comical characters; they were deeply sinful criminals. I remembered how once we were doing a Christmas marathon in Paris and we would send our devotees to  the train stations. The girls particularly would go on the trains and distribute books to the people just before the train left. As the train started to go, they would jump off. One young French girl, small girl, very pretty girl, very delicate girl, I remember she was a very good book distributor, and she happened to approach a man on the train in a compartment.

She walked into the compartment and gave him a Krsna book. He looked at her for a moment, then he took the Krsna book, and he was so strong that he tore it almost in half. Then he threw it on the ground, stood up, and began stomping on it. She broke down in tears. And he was such a demon that he grabbed her and dragged her by her hair through the compartment and literally threw her off the train. The train had just started, and he threw her off the train. She dislocated her shoulder, and she had blood coming from her hair down her neck. She landed on her face. She had this bruise for weeks. I think she fractured a bone there. I was somewhere nearby, and someone came to get me. So I came, and we had to carry her back to the temple. And we were cursing that man. We were cursing him. Still, it was the marathon, and she was back on the marathon four days later. 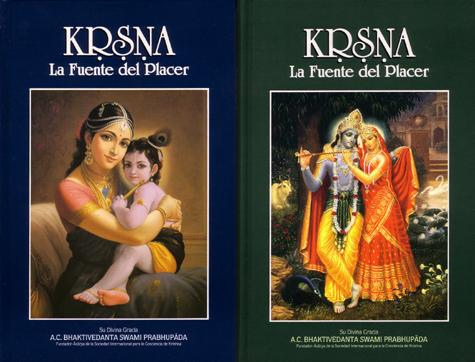 Anyway, what happened?it is quite a miraculous thing, in the mood of the purport today. That man was a banker from Spain?a very wealthy banker?and he had been in Paris doing business. The train went to Madrid. It took a day and a half or something like that. As a joke he kept that book to show his wife, to show her what he did, how he had stomped on the book and thrown that nonsense girl, that beggar, off the train. He said, “See what I did to the book,” and he put it on the kitchen table. What happened was the maid came that day, and the wife had gone shopping and the husband had gone to the bank. The maid came, and she took the book. She thought that it was one of the family’s books and that somehow it had been damaged?a car had run over it or something. So she dusted it off and repaired it as best she could and put it in the library in the man’s study.

About a year went by, and unfortunately that man’s wife died in a car accident. His son ran away, and his daughter got married to some low-class person. He ended up all alone, and he was just so despondent. When his wife died he went into a deep depression. His kids had left, and his wife had died in a head-on car crash. He was just devastated, devastated. So, he was in his study, contemplating suicide, and he happened to look up on the bookshelf. He was actually looking for the Bible, although he wasn’t a very religous man. As Krsna says in the Bhagavad-gita, four types of persons approach Him?usually the person in distress. So he was looking for the Bible, and he saw that book.

Something compelled him to take that book out, and he opened it up and started reading it?the Krsna book?and he read the part where Vasudeva is preaching to Kamsa. In that discussion Vasudeva mentions the principles of reincarnation and how the living entity goes from one body to the next just like the worm who carefully places the front part of his body, then picks up the next portion, and goes on. There is some analogy like that given by Prabhupada. And it gave the man some solace to think that his wife was not actually dead but that she had just changed bodies. It was nothing he had ever thought of in his life, but it gave him just enough faith not to kill himself.

So, the man went to sleep, and then he awoke in the morning. He was supposed to go to work, but somehow he was drawn back to that book, which was still on the table. So he went back and read it. For three days he stayed home?he didn’t go to work; he just read that book. And he had a complete change of heart. The book gave him so much solace?that what had happened was his karma; that he had to be forbearing, had to be tolerant; and that his wife had only changed bodies. He was just ripe for that knowledge. He thought about it a lot for a week. Then, you know what he did? He looked in the back of the book, and he saw there was an address. The book was in French, but he spoke French. He found the address and called the temple in France and found out there was a temple in Madrid, and he went to the temple. When the temple president opened the door, this man was in a business suit, and he was on his hands and knees. He was saying, “Please forgive me. Please forgive me.” The temple president was a relatively new devotee. He said, “Excuse me?” He thought this guy was mad. The man said, “Please forgive me for what I have done.” And the temple president said, “Well, do you want to come in and talk a little?”?because he could see that he was nicely dressed. So the man came in and talked in the office, and he revealed how many years before . . . He had the Krsna book with him, and he said, “I destroyed this book, number one. And I was very rough with one of the members of your society.” And he started crying. He said, “I just want to apologize, because she was trying to deliver me and I treated her so roughly. I am just so sorry.” Then he said, “Is there anything I can do?” The devotee was new, and he didn’t know how to respond. So the man just said, “Let me write you a check.” He wrote out a check for a large sum of money, gave it to the devotee, and left.

That was Wednesday. On Sunday, the temple president was giving a lecture and he saw the banker sitting in the back of the temple room listening.  Every Sunday the man would come to the temple, and he would listen. Some time went by. He wasn’t old, maybe forty or so; he was fairly young and successful. One day he told the temple president that he wanted to move into the temple and become a devotee. No one could believe it, because he was so affluent. And guess what service they gave him? He was the temple treasurer for some time. [laughter] Then came the Christmas marathon, and he asked if he could go on the marathon. He was kind of older, but the devotees said, “Okay, you can go.” He went out, and he actually did quite well. Then he asked, “I don’t want to be the temple treasurer. I just want to distribute books.” So that’s what he did. He became a book distributor.

If you concentrate all your intelligence in distributing my books, all your other activities will be perfect. This is my promise to you. - Srila Prabhupada