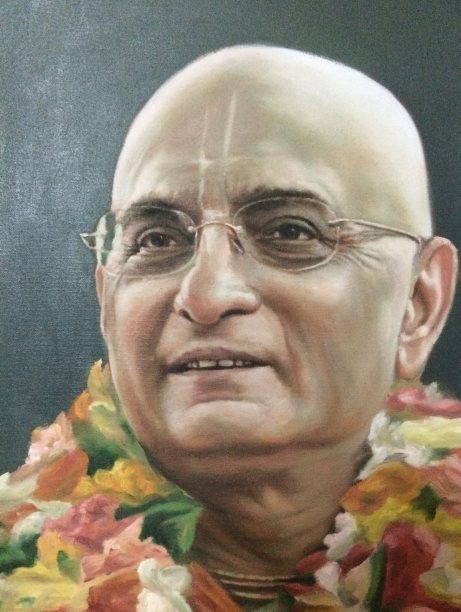 Bhakti Charu Maharaja participated in the ISKCON Bureau meeting on May 25th, after which he left for Bombay and flew to America. Unfortunately, Maharaja fell ill in America and departed from this planet on July 4th. This was a very auspicious day. It was the first day of Caturmasya, the disappearance day of Sanatana Goswami and also Guru Purnima. This was a most auspicious departure for a very special Vaisnava, although painful for everyone. The community of devotees worldwide was shocked when they heard of Maharaja’s departure.He was willing to go to any lengths to serve Prabhupada’s mission by his exemplary behavior and determination.

Maharaja was very fortunate as he received first and second initiation in a single ceremony and sannyasa on Gaura Purnima in 1977. Srila Prabhupada gave him the monumental assignment of translating his books into Bengali.

Maharaja took this assignment very seriously. I believe he used to wake up at night and continue translating till morning. For Prabhupada’s pleasure he built a beautiful temple in Ujjain in just ten months. This is one of ISKCON’s most beautiful temples and speaks volumes about Bhakti Charu Swami’s dedication to Srila Prabhupada’s mission. He had a burning desire to make Prabhupada’s achievements well-known around the world. With immense struggle and persistence, he was able to convince even India’s premier and practically lone TV channel at that time, to telecast the ‘Abaya Caran’ series for a whole year. These are only a few of his unlimited achievements.

He was fortunate to render personal service to Srila Prabhupada by massaging him, cooking for him, etc.

He was very gentle by nature and kind in his dealings with everyone. We shared a cordial relationship. He liked serving the Vaisnavas and would regularly invite me and other Vaisnavas for prasadam. He was a scholarly Vaisnava and a good orator. His absence is a great, irreparable and painful loss to our world-wide ISKCON movement.

As we all know, death is inevitable. Maharaja’s disciples will undoubtedly be aggrieved beyond words. We must remember Srila Prabhupada’s instructions on Guru-tattva at this moment. Prabhupada had explained several times that the guru is present in two forms – Vapu and Vani. Prabhupada had also explained that Vani is more important than Vapu. With regards to his own spiritual master, Prabhupada remarks in his dedication in the first canto of Srimad Bhagavatam – “He lives forever by his divine instructions and the follower lives with him”.

He reasons ill who says that Vaisnavas die When thou art living still in Sound!

The Vaisnavas die to live and living try To spread the holy life around!

By meditating on these words, every disciple and follower of Bhakti Caru Swami may strengthen his/her commitment to his instructions -Vani- and remain fixed in Krishna consciousness just as he himself was surrendered to Srila Prabhupada’s instructions.

Srila Prabhupada built a house in which the whole world could live in. I often tell devotees that ISKCON is a joint family. In a joint family; the parents, children and grand-children all live in one house. When the father passes away, the uncles, aunts and cousins look after the aggrieved family.

I am certain that all the senior members of our society and devotees will gladly extend their association and guidance to Maharaja’s disciples and followers. Prabhupada wanted all of us to stay under the ISKCON umbrella.

Bhakti Caru Swami always wanted all his disciples to stay in ISKCON. He would often quote Prabhupada’s statement that ‘your love for me will be shown by how you co-operate with each other’.

Devotee care is a very important element in our society and I am sure that in this most disturbing moment in the spiritual lives of many of Bhakti Caru Swami’s disciples, the entire network of Senior Vaisnavas will not only pray for their spiritual safety and progress, but will also be available to them for all assistance in meeting their spiritual needs.

He had also served twice as the Chairman of the GBC body and will always be remembered for his sincere surrender to Srila Prabhupada’s instructions.

Bhakti Caru Swami will also be fondly remembered for his transcendental qualities and humility. All the devotees of our movement must try and imbibe from his life the innumerable devotional qualities exhibited by him.

All glories to His Holiness Bhakti Charu Swami Maharaja!

I pray this meets you all well.