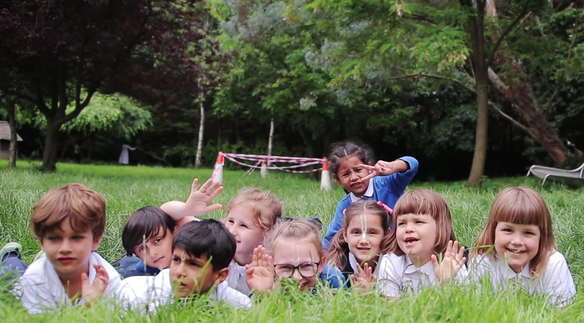 The first thing that has changed about the Bhaktivedanta Manor Gurukula is that it is no longer called that, it is now simply referred to as the Gurukula – The Hare Krishna Primary School. This is part of the story which has seen big changes happen over the last year and half.

In 2017, due to the construction of the Haveli, the Manor School had to move to the nearby picturesque Elton Cottage. Here a former residence has been transformed into a well-equipped school. While the teachers and the children missed being in the devotional environment at Bhaktivedanta Manor, this site provided many positives which included a secure site set in beautiful grounds.

However, the last few years have been very tricky. A poor school inspection by OFSTED (UK schools’ inspectorate) and financial troubles as well changing of the long-running staff, meant that the school’s future was in serious doubt.

In May 2019, a group of devotees took on the challenge to see if they could save the school from what looked like certain closure. Fuelled by the idea that there are so few gurukulas in the world and that this one had been serving the Manor community for over 30 years, they felt impelled to see what they could do to keep it open.

A charity was set up ‘The Gurukula Trust’ to take on proprietorship of the school and restructuring was put in place as well a recruitment drive to get in qualified devotee teachers to improve the set up. A new headteacher was appointed in Mother Gunacuda who has plenty of teaching experience in the UK and was previously the headteacher at Sri Mayapur International School.
An agreement was made with the Manor where they would carry on housing the school but the school would need to become financially self-sufficient. Hence the new brand and name to distinguish itself.

The team of devotees behind this has gone through many ups and downs to get this far. They have a plan in place in how to make the school more sustainable over the next year and half. The issue they face though is the immediate short term. The challenges of education in the UK is financially draining and that, coupled with the Covid-19 pandemic, has left them with a shortfall for this academic year.

A campaign was set up to see if they could get 300 families or individuals to give £10 per month. This small donation from a large group would help sustain the Gurukula till September 2022 when the school would be in position to finance itself.

Please also watch these short videos to get an idea of what our Gurukula is like.