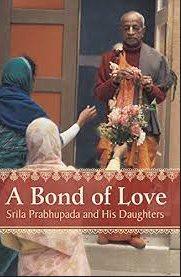 “What I have found to be truly valuable to me was sitting and listening to my senior godsisters tell me of their personal history and past times with Srila Prabhupada. Their stories always revealed his kind and fatherly demenor. His light hearted humor, his endearing personal guidance, how he motivated them to fully utilize and develop their natural talents and abilities in service to Krishna.”i

In the preface to A Bond of love: Srila Prabhupada and his Daughters, Her Grace Malati gives her reason why she reached out to her godsisters and asked a question whose answers form the basis of this book… answers which begat fragrant flowers for a garland of memories.” While riding in the back of a taxi in 2008 a godsister shared a sweet exchange and memory she had with Srila Prabhupada on the eternal topic of friction between genders. He put it so neatly in perspective and touched her heart that she realised this story and the many others like it should be heard and documented. In this decade of the Twenty First Century in a world transfixed with gender and gender ideology, it is a very timely publication.

The ancient Greek play The Bacchae by Euripides is set in a town ruled by a king called Pantheas. The citizens rebel against the moral order. Men and women neglected their duties and fled to the mountainside to worship the god of decadence Dionysius. When the king hears of this, he realises he has to take action. He summons Dionysius to his throne room to discuss this matter with him. Dionysius however tells the King that his armies have no power over him and he shows the king why this is so. He invites him to see the women dance naked on the mountainside but on one condition, the king would have to wear a dress and parade through the town. The king agrees to this but as a result he loses his authority when the citizens see him walking around like this. Dionysius points to a tree and tells him he will have a better view if he climbs the tree. Pantheas climbs the tree and when the women see him, in their drunken state they rush and tear him limb from limb. In the final scene of the play Pentheus’s grandfather is standing there and he says to this woman, what do you see? This woman is sitting there with King Pentheus head in her lap. She happens to be the Kings mother but she is still under Dionysius’s intoxication and she says “It’s a trophy, it’s a lion’s head, it’s something great. Her father asks her to look again. By now the intoxication has started to wear off and on looking down she realizes it’s the head of her son. Her father again asks her What do you see and she says “I see horror, I see suffering, I see grief.” That’s what we see right now.iiThe sexual revolution of the 1960’s saw a revival in the cult of Dionysius among the youth of the Western World. Men and women neglected their duties and responsibilities and fled to decadent music festivals to dance under the influence of drugs and intoxication resulting in similar social chaos.

Into this environment came A C Bhaktivedanta Swami Srila Prabhupada, Lord Krishna’s emissary from the Spiritual world, to restore order. Alarmed by the degraded condition of the youth he persuaded his followers that the human form of life was a very rare chance to reconnect with God. Reversal is the movement of the Tao, – the further the tide goes out the further it comes back in and Srila Prabhupada’s disciples became straighter than the straight. Couples had to be married if they wanted to become his disciples and initially, he performed wedding ceremonies. This was a far cry from the words issued by Mary Woolstonecraft in her revolutionary book ‘Vindication of the rights of Women’ which the feminist movement recognised as the book that changed the course of women’s role in society. Her influential father William Goodwin had written that marriage was the most odious of all monopolies. Freedom movements sow the seed of their own destruction however as outlined by Hridayananda das Goswami;“Liberation movements have sought to free blacks, Latinos, homosexuals, females from the social dominance and economic exploitation of so-called white Americans, they reinforce rather than transcend a materialistic view and unwittingly contain within their ideology the seeds of exploitation and bondage the very things they are fighting against”iii. The truth of this from a woman’s point of view is borne out by a study by the American Psychologist Marynia Farnham for her book Modern Woman; the lost sex. “Women should begin especially to look with critical eyes at the present physical framework of home as represented by the crammed efficient apartments, she writes, set in a cell block of similar dwelling units, it is an expression in bricks and stones of modern womans reduced status.iv The campaign for human rights can be traced to Eighteen Century Europe as outlined by His Holiness Ravindra Svarupa prabhu: “Eighteenth Century Europe was completing the turn from a God centered to a human centered culture of obligations. With the triumph of humanism, obligations lost their force, and talk of rights began. Obligations alone remain independent of conditions. They belong to a realm situated above all conditions, because it is situated above this world.”vModern people especially women stand Janus faced, drawn in two directions at once. The home unless an agrarian setting can no longer keep her occupied. Srila Prabhupada’s Movement offered his followers unlimited opportunities however to engage in service and he was always encouraging. Sarvani devidasi appreciated Srila Prabhupada’s philosophy of seeing beyond material designations “Most importantly for me and for further generations to hear was that he viewed his women disciples as spirit souls above and beyond any material designations and how he provided them with many opportunities to actively serve side by side with their godbrothers in helping him spread Krishna Consciousness throughout the world. How truly innovative, wise and merciful Srila Prabhupada was in adopting the term brahmacharani and allowing women such as myself to take shelter at his lotus feet.” vi God is a person, he informed them. He is supremely beautiful His name is Krishna, and by calling out His name, their lives would be purified and they would become happy. Science means practical application, and as they started to chant their lives began to change and bore testimony to the truth of his statement. Carried along on the wave of Srila Prabhupada s transcendental bliss, his disciples became one pointed in their desire to please him and to help spread his Krishna Consciousness Movement all over the World. In his book ‘Flow, the Hungarian American psychologist Mihaly Csikszentmihalyi defines flow as “the state in which people are so involved in an activity that nothing else seems to matter, the experience itself is so enjoyable that people will do it at great cost, for the sheer sake of doing it…. concentration is so intense that there is no attention left over to think about anything irrelevant or to worry about problems…the sense of time becomes distorted.vii

(Who will protect me from my protector?viii

In civilizations through time categories such as women children and old people are included as needing protection and Srila Prabhupada was disturbed if his disciples were abusing power. He chastised them, such as he did with Rukmini’s first husband “Prabhupada though I looked thin and I didn’t look healthy or happy. He said my husband and I should live separately. ..my then husband tried to explain himself to Prabhupada, but Prabhupada ignored him. FinallyPrabhupada looked at him and said “I have given you my daughter and you have not taken care”. One of the intentions of the book as outlined in the preface is to show how his women disciples strongly felt Srila Prabhupadas love and care ; “Prabhupada was sweet to the girls because he knew what we had to put up with in his Movement; he knew how much we had to preserve and gave us special mercy, wrote Sangitadevidasi. Accounts such as these perfectly answer Her Grace’s Malati question to her godsisters : “ After so many years ,your life is still reposed around Srila Prabhupadas lotus feet. Why? What are your memories and how has it changed your life.?

Before he left Caracas, Prabhupada told us , writes Jayaramad devi dasi, If you follow the four regulative principles, chant sixteen rounds, and go on Sankirtan, I promise you will go back to Krishna in this life”.

This is the promise of Lord Krishna’s pure devotee :

A bond of Love: Srila Prabhupada and his Daughters . Bookwrights Press 2020

Jones, E M, The truth about the revolution. culturewars.com

Tags: a bond of love, srila prabhupada, his daughters
E-mail me when people leave their comments –
Follow