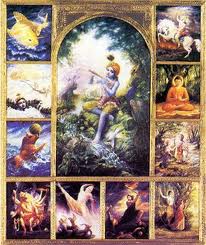 The system of yoga entails controlling the mind, and the Lord of the mind is Aniruddha. It is stated that Aniruddha is four-handed, with Sudarsana cakra, conchshell, club and lotus flower. There are twenty-four forms of Visnu, each differently named. Among these twenty-four forms, Sankarsana, Aniruddha, Pradyumna and Vasudeva are depicted very nicely in the Caitanya-caritamrta, where it is stated that Aniruddha is worshiped by the yogis. Meditation upon voidness is a modern invention of the fertile brain of some speculator. Actually the process of yoga meditation, as prescribed in this verse, should be fixed upon the form of Aniruddha. By meditating on Aniruddha one can become free from the agitation of acceptance and rejection. When one’s mind is fixed upon Aniruddha, one gradually becomes God-realized; he approaches the pure status of Krsna consciousness, which is the ultimate goal of yoga.

In the spiritual sky the representations of Näräyaëa are twenty in number and are described as follows:

Hayasirsa-pancaratra that there are nine forms protecting the two Puris known as Mathura Puri and Dvaraka Puri. These nine forms are Vasudeva, Sankarsana, Pradyumna, Aniruddha, Narayana, Nrsimha, Hayagriva, Varaha and Brahma. These are different manifestations of the prakasa and vilasa forms of Lord Krsna.