“Krsna is giving you chance because you want to serve. It is all Krsna's grace. Krsna says "tesam satatam yuktanam . . .'' Anyone who is sincerely engaged in My service I give him the intelligence. So if Krsna gives the intelligence who can compete with you? Krsna is the most intelligent.” -Letter to: Madhavananda: Vrindaban 16 September, 1974

Almost as if he was reading my mind Jayapataka Maharaja then said that he had been brainstorming with the devotees for a variety of solutions and he wanted my input with that process. For example someone had asked if it would be possible to unbend the axel back to its original shape so we could try starting the parade again. Someone else had the idea of extending a long pipe under the two main chassis beams through the front wheel spokes and then rest each end through the windows of two ambassador cars who could then limp the cart along. Some devotees knew about how we rallied enough strong men to pick a car up that was in the path of the Rath cart and put it on the sidewalk when had to get around it at Washington Square Park in N.Y. a few years earlier. They were proposing we heave-ho the cart up onto a big flatbed four-wheel harvest trailer so it could roll again independently. The range of wild ideas were bewildering and it took me awhile to sort through them all to determine which at least made a little sense and which were realistically feasible given the situation we were in.

I responded by first appreciating all these creative solutions then methodically began to point out why each one of them would not work. Given our circumstances it was unreasonable to think we could straighten the axle again and even if we could there was the very possible risk it might bend again. The long pipe idea was not only extremely dangerous but it would also destroy the doors on the car. That idea wasn't even practical because the streets simply were not wide enough to accommodate the rath flanked by two cars. When I arrived the consensus was to try and put the cart on an agricultural trolley, but they did not look at the underside of the cart to realize that it was not flat. The telescope hung way down in the middle by several feet so the flatbed trolley was not an option either. 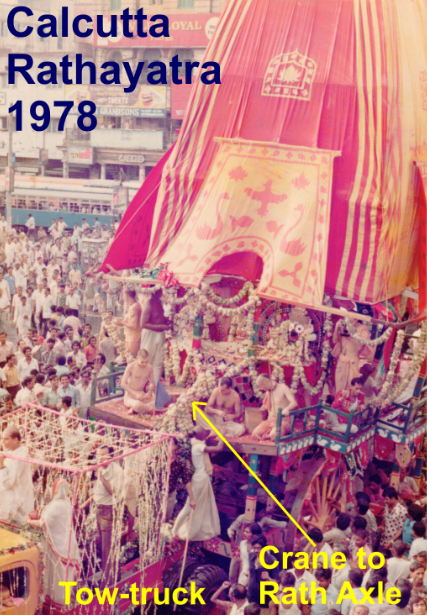 What all this brainstorming did however was spark my problem solving circuits. I soon realized that Lord Jagannatha was leading me to the solution as I repeatedly hear everyone refer to the Rath cart as having “Broken down.” I then posed the rhetorical question to Jayapataka Swami: “Well what does one normally do when their vehicle breaks down?” Everyone was now thinking as well as listening which was a mini victory in itself considering the cacophony of many thousands of people surrounding the temple waiting for the parade to start had not ceased. I then answered my own question: “We get a tow truck!”

As I explained it further it was evident that we had finally landed on a tangible plan to rescue the situation. I stressed that we needed to get a heavy-duty tow truck capable of lifting a large vehicle like a bus or a big rig.  Within moments someone was on the phone calling to make the arrangement. I went down to the street and waited anxiously on the top of the Rath cart while looking over the ocean of heads bobbing around. About forty-five minutes later I finally noticed at the end of Albert road a tow truck approaching from Camden Street. It took another 15 minutes to make its way thru the crowd. By then I collected the few tools that I had on board and I was ready to do whatever needed to be done to make this arrangement work. As the tow truck slowly backed into position it was evident that we would have to smash a big hole right through the center of the deck directly in front of the deities. That was necessary for the winch boom to properly connect directly over the front chariot axle recessed from the front of the cart by approximately five feet. Remember there were NO power tools so there was no way to keep the required surgery from getting very messy. All we had to work with was a big crow bar and a hammer. Splinters went flying everywhere as we literally beat our way through the ¾ inch plywood deck as if we were conducting a jailbreak. As we got closer the chanting of Hari Bolo echoed off the walls of the temple building and eventually we had a hole big enough to drop the heave wire rope through and hook it up to what was left of the twisted axle. I then instructed the Pujaris to steady the deities, to secure their own footing, hold on and pray. I held my breath as I gave the word to the tow truck operator to engage the hoist and slowly the whole front end of the rath was magically raised off the ground. It was almost as if the demigods were personally reaching out of hidden dimension to mystically raise the cart off the ground in a way I could have never imagined.

As that got done I began to realize that we couldn’t just have the tow truck deliver the cart to Shyam Park. After all this was Ratha-yatra and all the Jagannatha Bhaktas had come to participate in the auspicious service of pulling the Lord on His chariot. So I climbed down under the cart and got some help from the crowd to collect the now useless ropes. We then collectively pushed our way to the front of the tow truck to tie the ropes to the front bumper. I was thinking to myself in a somewhat vengeful way... “Ok… You want to pull so much, well go ahead! Now the price to pull Lord Jagannatha is you will also have to pull this very heavy tow truck as well - so there! Don't quit on me now!” I then worked my way back to the running board on the driver’s side of the Tow truck to instruct the man sitting there to keep the engine off but keep his foot on the brake. I spent a few moments speaking mostly English with him punctuated by as many Bengali words I knew to communicate that his service was to steer Lord Jagannatha through the streets of Calcutta safely so nobody got hurt. I pointed out to him that the brake pedal under his foot was the only way to stop this unstoppable force and that we should both pray that Lord Jagannath will empower him to know when it was necessary to use it. Teek hay? (OK?) Tum Bahut Acha! (Everything good for you?) 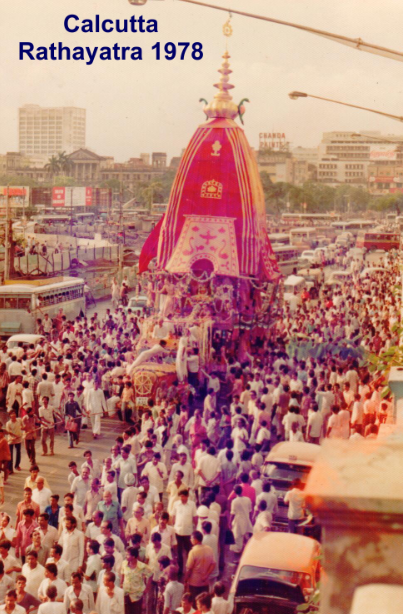