Ratha-yatra, or the Festival of Chariots, is a joyous event celebrated for thousands of years in the Indian holy city of Jagannatha Puri, and more recently by Hare Krishna devotees in cities around the world. Another name for Krishna, Jagannatha refers to the ecstatic form of the Lord with large eyes and rugged features who is carried on a gigantic chariot during this festival (and worshiped in an ancient temple at the center of Jagannath Puri.)

As the story goes, Lord Krishna once overheard a conversation about how His dearest devotees, the cowherd maidens of Vrindavana, were lamenting in His absence. When He heard these accounts of overwhelming love in separation, the Lord’s hair began to stand on end, His eyes opened wide and filled with tears, and His arms and legs contracted as He went into a state of spiritual ecstasy. Seeing Lord Krishna in this condition, His elder brother, Balarama (Baladeva), also began to feel ecstatic symptoms and displayed similar features. When Their sister, Subhadra, arrived at the scene, she too became consumed with ecstatic joy. Thus the sublime deity forms of Jagannatha, Subhadra, and Baladeva represent this sweet pastime.

The festival of Ratha-yatra represents Lord Jagannatha’s longing to reunite with His dear devotees in Vrindavana, foremost among them, Srimati Radharani. According to tradition, the Lord gets lovesick once a year just prior to the festival. To cheer him up, His servants arrange for Him to go on a lavish procession to meet up with His devotees.

Srila Prabhupada, the founder of the Hare Krishna movement, was very fond of Ratha-yatra. As a child he began celebrating Ratha-yatra when he was five years old, using a small home-made cart and pulling it around the neighborhood with his friends. Later in life, from 1967 until his passing, Srila Prabhupada joined thousands of disciples in cities around the world as they celebrated elaborate Ratha-yatra chariot festivals in the streets of London, Paris, Sydney, Tokyo, San Francisco, Los Angeles, and on New York’s prestigious Fifth Avenue. 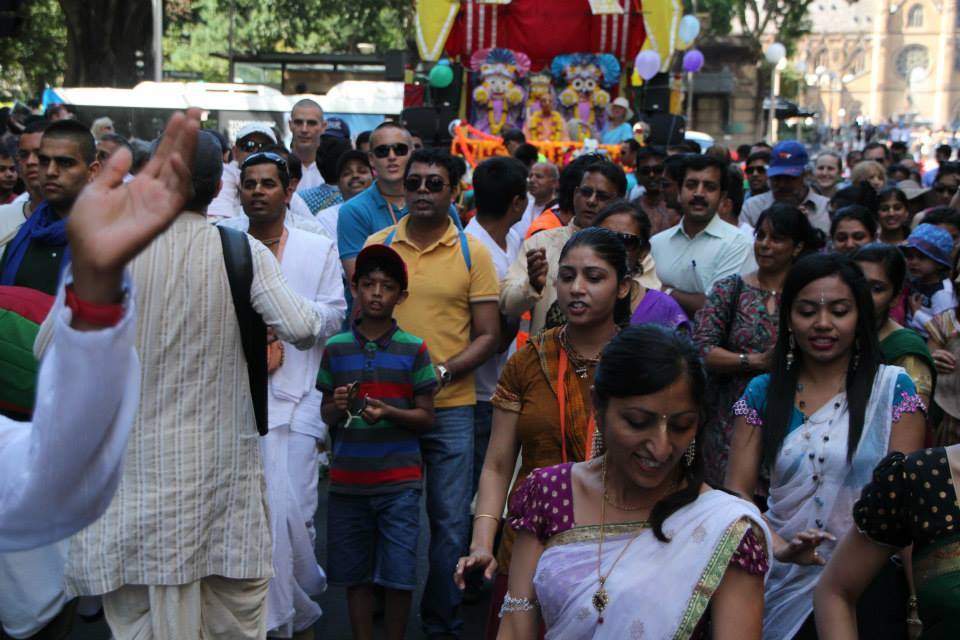