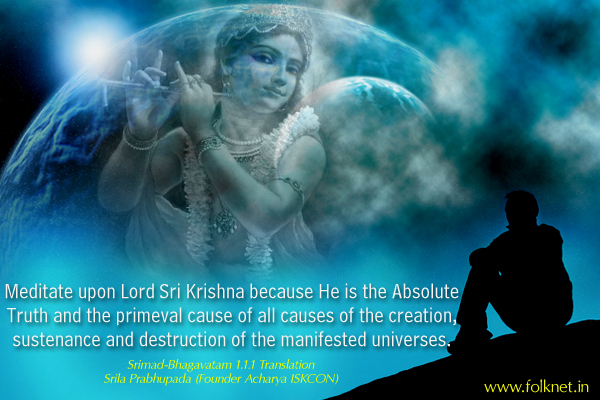 Chapter 1: Questions by the Sages

O my Lord, Śrī Kṛṣṇa, son of Vasudeva, O all-pervading Personality of Godhead, I offer my respectful obeisances unto You. I meditate upon Lord Śrī Kṛṣṇa because He is the Absolute Truth and the primeval cause of all causes of the creation, sustenance and destruction of the manifested universes. He is directly and indirectly conscious of all manifestations, and He is independent because there is no other cause beyond Him. It is He only who first imparted the Vedic knowledge unto the heart of Brahmājī, the original living being. By Him even the great sages and demigods are placed into illusion, as one is bewildered by the illusory representations of water seen in fire, or land seen on water. Only because of Him do the material universes, temporarily manifested by the reactions of the three modes of nature, appear factual, although they are unreal. I therefore meditate upon Him, Lord Śrī Kṛṣṇa, who is eternally existent in the transcendental abode, which is forever free from the illusory representations of the material world. I meditate upon Him, for He is the Absolute Truth.

Tags: srimad-bhagavatam
E-mail me when people leave their comments –
Follow