In the year 1510 A.D., Sri Caitanya Mahaprabhu traveled to South India, spending four months of Caturmasya Vrata, the monsoon season, at the home of a brahman known as Vyenkatta Bhatta. During His stay, the Lord converted the entire family from Ramanuja Vaisnavism to Krsna Bhakti (Gaudiya Vaisnavism). In his paper entitled Sri Chaitanya Mahaprabhu, Srila B.V. Puri Goswami of Sri Krishna Chaitanya Mission, Ganjam, Orissa, states that Lord Caitanya's discourse on the fundamental principles of rasa in Srimad Bhagavatam converted the whole family of Venkata Bhatta from the worship of Laksmi-Narayana to the worship of Sri Sri Radha-Krishna.

Vyenkatta Bhatta's son, Gopala, who was seven years old at the time, served Lord Chaitanya continuously during His stay and developed an intense love for Him. When Lord Chaitanya was ready to depart, Venkata Bhatta fainted, and young Gopala Bhatta's eyes filled with tears. To please the boy, Lord Chaitanya agreed to stay for a few more days. During this time, Gopala Bhatta had a vision in which Mahaprabhu revealed Himself as Lord Krsna. The Lord told Gopala that one day he would meet two jewel-like devotees in Vrindavan— Rupa Goswami and Sanatana Goswami. Waking from the dream, Gopala wanted to leave at once for Vrindavan, but Mahaprabhu told him to stay at home and serve his parents. As predicted by the vision, young Gopala later went to Vrindavan and became one of the illustrious Six Goswamis.

While staying in Vyenkatta Bhatta's family asrama, Lord Caitanya became very lonely for Lord Jagannath in Puri. In this mood of separation, Mahaprabhu lovingly carved His own set of Jagannatha Deities, which reside to this day not far from the Bhatta family's original home. The family descendants of Vyenkata Bhatta also continue to live at Srirangam.

The Deities of Lord Jagannatha, Baladeva and Subhadra carved by Mahaprabhu are extremely beautiful and captivating. Their Lordships are seen here in pictures that were taken over several years, the more recent ones being obvious because the Deities had been repainted.

There are several other divine personalities residing in the temple enclosure along with Lord Caitanya's Jagannatha Deities, including Lord Nrsimhadeva, Laksmi Devi, and Sudarsana. Outside this Jagannatha matha is a monument with Mahaprabhu's footprints. A board outside the shrine reads, in Tamil:

"A treasure that cannot be found. The source of the Hare Krishna Hare Rama mahamantra, Sri Chaitanya Mahaprabhu's (who is an Avatra of Sri Krishna) footprints is found here. All devotees are requested to chant this mahamantra and gain happiness."

"Lord Sri Chaitanya Mahaprabhu visited the place in the year 1510 and stayed for four months at Srirangam."

There are many paintings in the Jagannatha matha depicting Caitanya Mahaprabhu's pastimes at Sri Rangam. In the center hall of the temple is a diorama of the Lord and the Jagannatha Deities Sri Caitanya carved.

"Spending a few days with Ramananda on Krishna topics Sri Chaitanya in His progress through the South visited Mangalgiri in Guntur, Ahobilam in Karnul and Tirupati in Chittur Districts. He visited almost all the shrines of Tamil country. He had been to Conjiveram, Sri Rangam, Madura, Shiyali, Kumbakonam, Tanjore and saw several shrines in the Tinnevelly District and in the Travancore State where He saw Janardana and Ananta Padmanabha, Adikeshava and Kanya Kumari before He visited Payoshni and the Western-coast shrines.

At Sri Rangam He lived for four months in the house of a Sri vaishnava, who had migrated to that place, named Venkata Bhatta, with whom He had a comparative discussion of the principles of majesty (aishvarya) and mellow attraction (madhurya). It resulted in the conversion of his brother Prabo 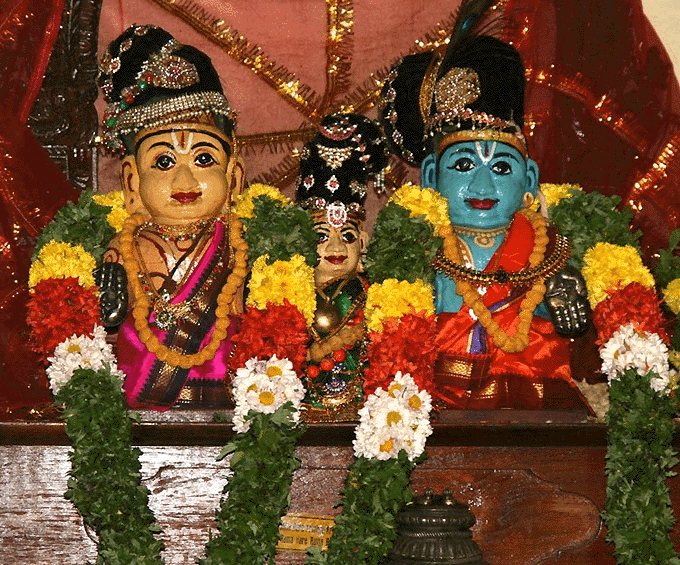