Gopi Chandana or Tilaka - The Symbol of Sri Krishna

One of the most striking aspects of a Vaishnava’s attire is his tilak – the clay markings on his forehead. Srila Prabhupada said that just as a soldier’s regiment can be known by the uniform he wears, similarly a devotee of the Lord must wear tilak on his forehead in all conditions.

Although it is best to wear tilak all the time, some workplaces may not allow it. If a devotee cannot wear tilak to work then he can chant the appropriate mantra and apply ‘water tilak’.

Anyone who wishes to acknowledge the simple truth that "I am Lord Krishna's servant" can wear tilaka, the clay mark devotees wear on the forehead and other places on their body. You may not feel you have much devotion to Krishna, but you're not prohibited from wearing tilaka, because it's a sign that you're trying to be His devotee. What's more, the qualifications for being Krishna's devotee soon develop in a person who learns the art of wearing tilaka.

Tilak is worn for both sanctification and protection. When one wears tilak, he is reminded that his body is a temple and should be respected as such. Both body and mind should be kept clean. It also reminds others who see the person wearing tilak of Krishna. There are many different understandings of what the shape of the tilak represents for Vaishnavas, but generally ISKCON devotees accept that the U-shaped mark represents the heel of Lord Krishna, and the oval part represents a Tulasi leaf.

Gopi Chandana or Tilaka refers to the markings which Vaisnava devotees apply to their bodies, to remind themselves and others that we are all eternal servants of Lord Krsna. The U-shaped mark represents the heel of Lord Visnu, and the oval part represents the Tulasi leaf. Tilaka is applied to twelve parts of the body and the twelve names of the Lord are recited with each application. To apply tilaka, start with a little Ganges or Yamuna water (if you don't have any, get some water and stirring it with your right middle finger, chant:

How to Apply Tilaka

Apply tilaka with the ring finger of your right hand. Make a mark - about as wide as the space between your eyebrows - from the root of your nose to your hairline. Now use another finger, perhaps the little one, to make a clear space in the middle to form two vertical lines. If these lines come out crooked, you can straighten them with a third finger. If your forehead is bumpy, you can develop your own way of applying the clay. Now make the leaf-shaped mark, which should extend from the base of the lines to about three quarters of the way down the nose.

After marking your forehead, apply tilaka to eleven other places on your body, as shown on the illustration.

If you can't find the clay to make tilaka (or if your wearing tilaka wouldn't sit well with your boss), you can go through the same procedure using only water. Use water that has bathed the Deity or pure water you've sanctified by chanting Hare Krishna, Hare Krishna, Krishna Krishna, Hare Hare/ Hare Rama, Hare Rama, Rama Rama, Hare Hare. By chanting the names of the Lord and applying the invisible representation of His temple, you'll be protected and spiritually inspired for a Krishna conscious day.

Put the water in your left hand, and rub the hard tilak into the water, creating a wet paste out of the clay. Begin by putting your ring finger of the right hand into the clay, and starting between the eyebrows, bring the finger straight up to the hairline, making two straight lines. It should look like a long, narrow U-shape. Then use some more tilak to make the Tulasi leaf on your nose, it should extend about 3/4 of the way down your nose. As you apply the tilaka, recite the appropriate names of Vishnu listed here. Om kesavaya namah means "O my Lord Kesava, I offer my re 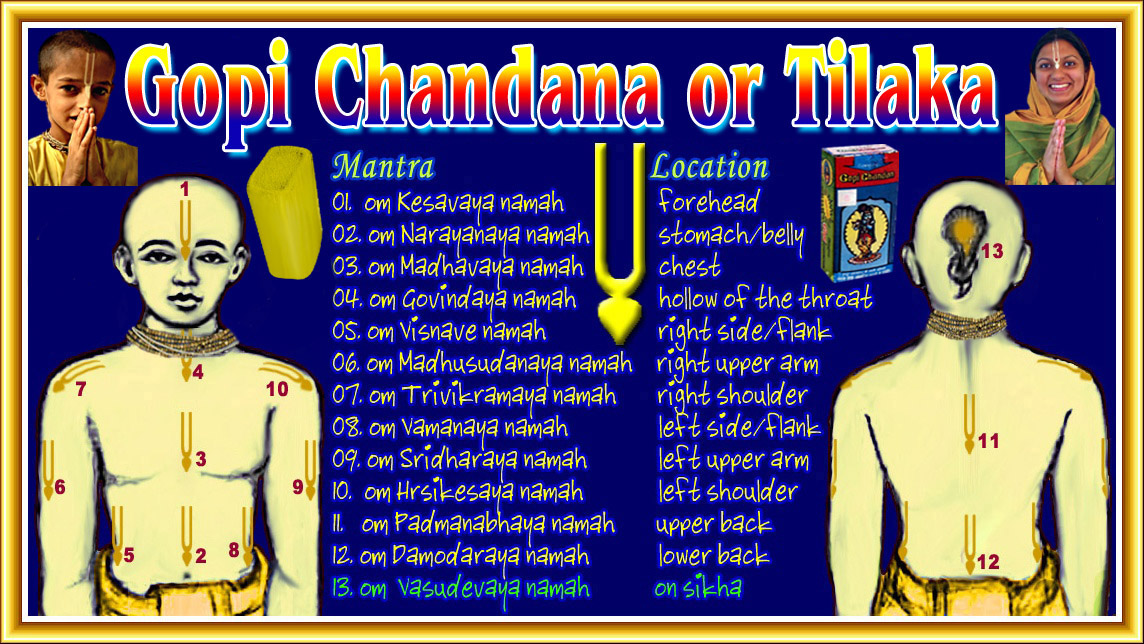