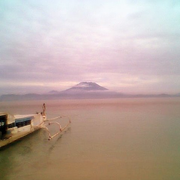 honestly...at least one round a day...

I'd heard about Hare Krishna movement as a kid. But then began to get interested after reading Bhagavad-Gita As It Is when i was in academy. In the books it is stated the importance of being initiated by a bonafide Spiritual Master so i approached a devotees i knew from internet and they invited me to a ISKCON Ashram.

There is a temple in my hometown, Shri Shri Radha Kunjavihari Ashram. There are many devotees whom i know. Some of them are Adipurusha Prabhu, Krishna Charana Prabhu, and Hari Narayana Prabhu.

I think the best words that describe myself is "the most fallen one". Basically i'm a shy person. I consider my first time visiting the Ashram was a big step in my life. The people in ISKCON are nice and honestly i can't find better people outside this community. It's been very nice until a misfortune happened to me. Being new in the movement i was very curious about what is prohibited and what is allowed and so forth. So i browsed on the internet and gained some knowledge. But there are also websites full of blasphemy against ISKCON sincere devotees. I read the contents and they began to affect my mind and faith. I even visited the site(s) several more times until i decided to ask about it to a senior devotee. To me the devotee explained that it's not true and i accepted it. Later after understanding about Vaishnava Aparadha, i realized that i had commit a really great offense. I didn't know what to do and being depressed for a long enough period of time. I prayed to the Lord to give me direction about what to do to relieve the offense, as it is stated that one can only be freed from Vaishnava Aparadha only by asking for forgiveness from the devotee offended. I thought the Lord gave me a help. Somehow when i browsed on the internet, i found a letter/mail posted on a site(i forgot what the site address was) and there was a list of email adresses of ISKCON devotees and i know some of them are the devotees whom was blasphemed by the website(s) i read and i thought i really have to ask for their forgiveness. So i sent some emails and received some replies. One of them told me to keep chanting the holy name and to serve all the devotees. I was really delighted and decided to do it. I believe it and still trying to do so, although with so many ups and downs. But there is a question in my mind. When will i be freed from all this aparadha, since there are still numerous devotees i haven't apologize to? i hope for an initiation someday but i'm not sure when i'll be qualified for it, considering the aparadha i'had commit. In this chance i would also ask for forgiveness from all the devotees who read this, since i don't know exactly how many devotees i had offended. Please accept my obeisances. All glories to Srila Prabhupada and all of you...

i'm looking for more association from devotees and chances to serve you all...

i'm not talented but i'd love to do a graphic work...maybe creating wallpapers and anything else...