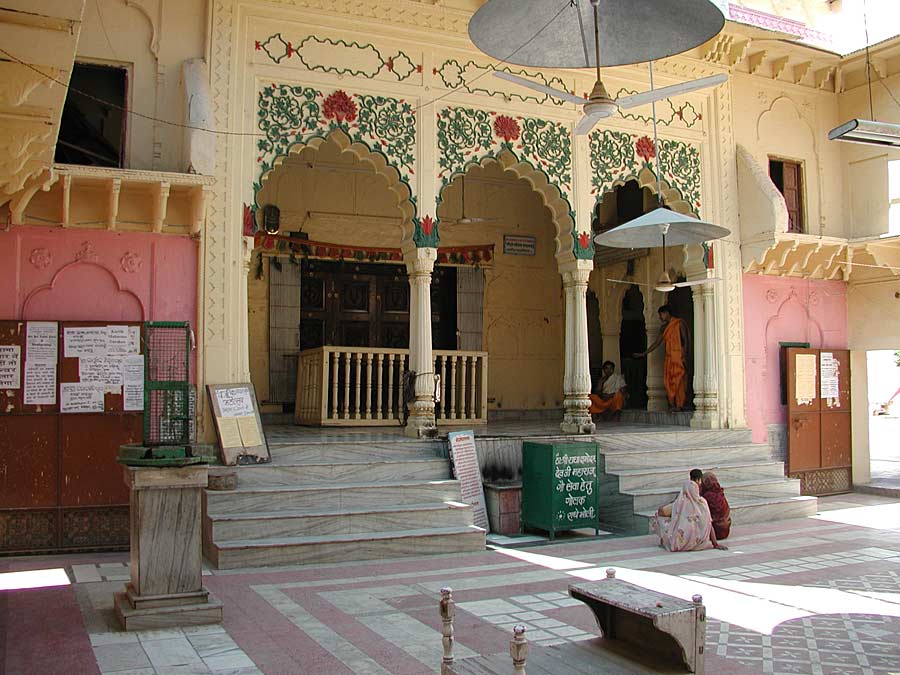 This is one of the most important temples in Vrindavana. The original Deity was hand carved by Rupa Goswami and given as a gift to his beloved disciple, Jiva Goswami, who later built a temple here. The Deity was first worshipped in the year 1542. The land was later acquired in 1558 when the Deity was installed on the simhasana (throne). The original Deity was moved to Jaipur when Aurangzeb attacked Vrindavana in 1670. The Deity now being worshipped is the pratibhu-murti (replica) and is considered nondifferent from the original Deity.Formerly this spot was in the middle of Seva-kunja and it was thebhajana place of Rupa Goswami. He would daily hold discourses on the Srimad Bhagavatam and Krishna's pastimes here with the other Goswamis and their close associates. Srila Prabhupada said that Radha-Damodara temple is in the centre of the spiritual world, because of the transcendental activities that went on here amongst the followers of Lord Chaitanya, led by Srila Rupa Goswami.Besides the Deities of Sri Sri Radha Damodara, also kept in this temple are the Deities originally worshipped by Krishnadasa Kaviraja (Radha Vrindavana-candra), Jayadeva Goswami (Radha Madhava), Bhurgarbha Goswami (Radha Chalachikan), as well as the govardhana-sila of Srila Sanatana Goswami which has the footprint of Lord Krishna impressed upon it.It so happened that Sanatana Goswami used to circumambulate Govardhana hill everyday as part of his daily vows; even in his old age. One day, Lord Krishna in the guise of a beautiful cowherd boy, suddenly appeared before Sanatana Goswami, and requested him that now you are very old, there is no need to go round Govardhana hill everyday.Sanatana replied that as he had taken such a vow to daily circumambulate Govardhana, he could not stop. Understanding Sanatana's determination, Krishna then stood on a big stone from the hill and started playing His flute. The flute playing of the Lord was so enchanting, that the stone started to melt and Krishna's footprint got impressed upon it and also the hoof print of a calf, along with Krishna's flute and His stick used for herding cows. Krishna then gave this stone from Govardhana hill to Sanatana and told that if he circumambulated this govardhana-sila four times, it would be equal to going round Govardhana Hill. Sanatana then accepted the sila from Krishna, and from that time on, he circumambulated this sila, instead of going all the way around Govardhana hill. One can have darsana of this sacred govardhana-sila by asking the pujari and giving a small donation.