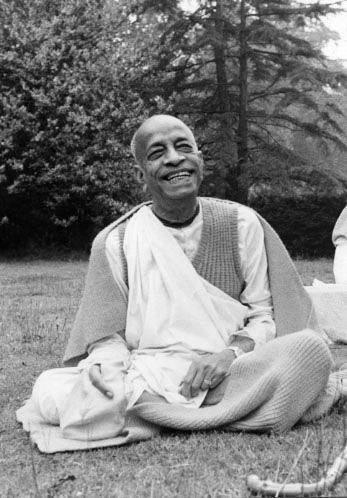 Those who are eager to awaken their spiritual consciousness and who thus have unflinching, undeviated intelligence certainly attain the desired goal of life very soon.
(Bhakti-rasāmṛta-sindhu).

It is the living entity's constitutional position to be an eternal servant of Kṛṣṇa because he is the marginal energy of Kṛṣṇa and a manifestation simultaneously one with and different from the Lord, like a molecular particle of sunshine or fire. Kṛṣṇa has three varieties of energy.
(Sri Caitanya Caritamrta).

Just as the illumination of a fire, which is situated in one place, is spread all over, the energies of the Supreme Personality of Godhead, Parabrahman, are spread all over this universe.
(Viṣṇu Purāṇa).

Forgetting Kṛṣṇa, the living entity has been attracted by the external feature from time immemorial. Therefore the illusory energy [māyā] gives him all kinds of misery in his material existence.
(Sri Caitanya Caritamrta).

When the living entity is attracted by the material energy, which is separate from Kṛṣṇa, he is overpowered by fear. Because he is separated from the Supreme Personality of Godhead by the material energy, his conception of life is reversed. In other words, instead of being the eternal servant of Kṛṣṇa, he becomes Kṛṣṇa's competitor. This is called viparyayo 'smṛtiḥ. To nullify this mistake, one who is actually learned and advanced worships the Supreme Personality of Godhead as his spiritual master, worshipful Deity and source of life. He thus worships the Lord by the process of unalloyed devotional service.
(Śrīmad-Bhāgavatam).

This divine energy of Mine, consisting of the three modes of material nature, is difficult to overcome. But those who have surrendered unto Me can easily cross beyond it.
(Bhagavad Gita).

The conditioned soul cannot revive his Kṛṣṇa consciousness by his own effort. But out of causeless mercy, Lord Kṛṣṇa compiled the Vedic literature
and its supplements, the Purāṇas.
(Sri Caitanya Caritamrta).

The forgetful conditioned soul is educated by Kṛṣṇa through the Vedic literatures, the realized spiritual master and the Supersoul. Through these, he can understand the Supreme Personality of Godhead as He is, and he can understand that Lord Kṛṣṇa is his eternal master and deliverer from the clutches of māyā. In this way one can acquire real knowledge of his conditioned life and can come to understand how to attain liberation.
(Sri Caitanya Caritamrta).

Devotional service, or sense activity for the satisfaction of the Lord, is called abhidheya because it can develop one's original love of Godhead, which is the goal of life. This goal is the living entity's topmost interest and greatest wealth. Thus one attains the platform of transcendental loving service unto the Lord.
(Sri Caitanya Caritamrta).

When one attains the transcendental bliss of an intimate relationship with Kṛṣṇa, he renders service to Him and tastes the mellows of Kṛṣṇa consciousness.
(Sri Caitanya Caritamrta).

The revealed scriptures conclude that one should give up fruitive activity, speculative knowledge and the mystic yoga system and instead take to devotional service, by which Kṛṣṇa can be fully satisfied.
(Sri Caitanya Caritamrta).

(The Supreme Personality of Godhead, Kṛṣṇa said): My dear Uddhava, neither through aṣṭāńga-yoga (the mystic yoga system to control the senses), nor through impersonal monism or an analytical study of the Absolute Truth, nor through study of the Vedas, nor through austerities, charity or acceptance of sannyāsa can one satisfy Me as much as by developing unalloyed devotional service unto Me.
(Śrīmad-Bhāgavatam).

When one actually becomes rich, he naturally enjoys all kinds of happiness. When one is actually in a happy mood, all distressful conditions go away by themselves. No extraneous endeavor is needed.
(Sri Caitanya Caritamrta).

Similarly, as a result of bhakti, one's dormant love for Kṛṣṇa awakens. When one is so situated that he can taste the association of Lord Kṛṣṇa, material existence, the repetition of birth and death, comes to an end.
(Sri Caitanya Caritamrta).

The goal of love of Godhead is not to become materially rich or free from material bondage. The real goal is to be situated in devotional service to the Lord and to enjoy transcendental bliss.
(Sri Caitanya Caritamrta).

In the Vedic literatures, Kṛṣṇa is the central point of attraction, and His service is our activity. To attain the platform of love of Kṛṣṇa is life's ultimate goal. Therefore Kṛṣṇa, Kṛṣṇa's service and love of Kṛṣṇa are the three great riches of life.
(Sri Caitanya Caritamrta).

In all revealed scriptures, beginning with the Vedas, the central point of attraction is Kṛṣṇa. When complete knowledge of Him is realized, the bondage of māyā, the illusory energy, is automatically broken.
(Sri Caitanya Caritamrta).

Only by devotional activity can one understand the transcendental form of the Lord, which is perfect in all respects. Although His form is one, He can expand His form into unlimited numbers by His supreme will.
(Sri Caitanya Caritamrta).

In the Age of Kali, Lord Kṛṣṇa assumes a golden color and, accompanied by His personal devotees, introduces hari-nāma-sańkīrtana, the chanting of the Hare Kṛṣṇa mantra. By this process He delivers love for Kṛṣṇa to the general populace.
(Sri Caitanya Caritamrta).

In the other three yugas — Satya, Tretā and Dvāpara — people perform different types of spiritual activities. Whatever results they achieve in that way, they can achieve in Kali-yuga simply by chanting the Hare Kṛṣṇa mahā-mantra.
(Sri Caitanya Caritamrta).