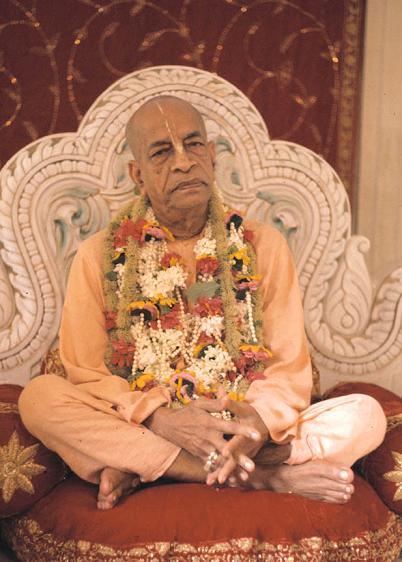 An unalloyed devotee who has developed ecstatic love for Kṛṣṇa is always
engaging his words in reciting prayers to the Lord. Within the mind he is
always thinking of Kṛṣṇa, and with his body he either offers obeisances by
bowing down before the Deity or engages in some other service. During
these ecstatic activities he sometimes sheds tears. In this way his whole
life is engaged in the service of the Lord, with not a moment wasted
on any other engagement.
(The Nectar of Devotion).

When a person is undisturbed even in the presence of various causes of
disturbance, he is called reserved and perseverant. An example of this
perseverance and reservation is found in the behavior of King Parīkṣit,
as described in the First Canto, Nineteenth Chapter, verse 15, of Śrīmad
Bhāgavatam. The King says there to all the sages present before him at the
time of his death, "My dear brāhmaṇas, you should always accept me as
your surrendered servant. I have come to the bank of the Ganges just to
devote my heart and soul unto the lotus feet of Lord Kṛṣṇa. So please bless
me, that mother Ganges may also be pleased with me. Let the curse of the
brāhmaṇa's son fall upon me — I do not mind. I only request that at the
last moment of my life all of you will kindly chant the holy name of Viṣṇu,
so that I may realize His transcendental qualities."
(The Nectar of Devotion).

The senses are always desiring sense enjoyment, but when a devotee develops
transcendental love for Kṛṣṇa his senses are no longer attracted by material
desires. This state of mind is called detachment. There is a nice example of this
detachment in connection with the character of King Bharata. In the Fifth Canto,
Fourteenth Chapter, verse 43, of Śrīmad-Bhāgavatam it is stated, "Emperor
Bharata was so attracted by the beauty of the lotus feet of Kṛṣṇa that even in his
youthful life he gave up all kinds of attachments to family, children, friends,
kingdom, etc., as though they were untouchable stools."
(The Nectar of Devotion).

When a devotee, in spite of possessing all the qualities of pure realization, is not
proud of his position, he is called prideless. In the Padma Purāṇa it is stated that
King Bhagīratha was the emperor above all other kings, yet he developed such
ecstatic love for Kṛṣṇa that he became a mendicant and went out begging even to
the homes of his political enemies and untouchables. He was so humble that he
respectfully bowed down before them.
(The Nectar of Devotion).

The strong conviction that one will certainly receive the favor of the Supreme
Personality of Godhead is called in Sanskrit āśā-bandha. Āśā-bandha means to
continue to think, "Because I'm trying my best to follow the routine principles
of devotional service, I am sure that I will go back to Godhead, back to home."
(The Nectar of Devotion).

When one is sufficiently eager to achieve success in devotional service, that
eagerness is called samutkaṇṭhā. This means "complete eagerness." Actually
this eagerness is the price for achieving success in Kṛṣṇa consciousness.
Everything has some value, and one has to pay the value before obtaining
or possessing it. It is stated in the Vedic literature that to purchase the most
valuable thing, Kṛṣṇa consciousness, one has to develop
intense eagerness for achieving success.
(The Nectar of Devotion).

This intense eagerness is very nicely expressed by Bilvamańgala Ṭhākura in his
book Kṛṣṇa-karṇāmṛta. He says, "I am eagerly waiting to see that boy of
Vṛndāvana whose bodily beauty is captivating the whole universe, whose eyes
are always bounded by black eyebrows and expanded like lotus petals, and
who is always eagerly glancing over His devotees and therefore moving slightly
here and there. His eyes are always moist, His lips are colored like copper, and
through those lips there comes a sound vibration which drives one madder
than a mad elephant. I want so much to see Him at Vṛndāvana!"

Attachment for chanting the glories of the Lord is also expressed in the
Kṛṣṇa-karṇāmṛta as follows: "What shall I do for Kṛṣṇa, who is pleasing beyond
all pleasurable conceptions, and who is naughtier than all restless boys? The
idea of Kṛṣṇa's beautiful activities is attracting my heart,
and I do not know what I can do!"

It is said by Rūpa Gosvāmī that the attachment exhibited by pure devotees for
Kṛṣṇa cannot possibly be perfected in the hearts of fruitive workers (karmīs)
or mental speculators, because such attachment in pure Kṛṣṇa consciousness
is very rare and not possible to achieve even for many liberated persons. As
stated in Bhagavad-gītā, liberation from material contamination is the stage
at which devotional service can be achieved.

If one can gradually advance his status in devotional service, this is
understood to be due to the causeless mercy of Kṛṣṇa Himself. If a person
is completely detached from material enjoyment and has developed
pure ecstatic devotion, even if he is sometimes accidentally found not living
up to the standard of devotional service, one should not be envious of him.
(The Nectar of Devotion).

Ecstatic love of Godhead can be potently invoked simply by following the rules
and regulations of devotional service as they are prescribed in scriptures,
under the direction of a bona fide spiritual master.
(The Nectar of Devotion).

When a devotee is found to be always associated with the Lord in ecstatic love,
it is to be understood that such a position has been awarded by the
Lord Himself out of His causeless extraordinary mercy.
(The Nectar of Devotion).

Spontaneous attraction to Kṛṣṇa, which is said to be due to the extraordinary
mercy of the Lord, can be placed under two headings: one is profound
veneration for the greatness of the Lord, and the other is one's being
automatically attracted to Kṛṣṇa without any extraneous consideration.
(The Nectar of Devotion).

In the Nārada-pañcarātra pure, unalloyed devotional service is explained as
being without any motive for personal benefit. If a devotee is continuously
in love with Lord Kṛṣṇa and his mind is always fixed upon Him, that devotional
attitude will prove to be the only means of attracting the attention of the Lord.
In other words, a Vaiṣṇava who is incessantly thinking of the form
of Lord Kṛṣṇa is to be known as a pure Vaiṣṇava.

The beginning of ecstatic love of Godhead is basically faith. There are many
societies and associations of pure devotees, and if someone with just a little
faith begins to associate with such societies, his advancement to pure
devotional service is rapid. The influence of a pure devotee is such that if
someone comes to associate with him with a little faith, one gets the chance
of hearing about the Lord from authoritative scriptures like Bhagavad-gītā
and Śrīmad-Bhāgavatam. Thus, by the mercy of the Lord, who is situated in
everyone's heart, one gradually develops his faith in the descriptions of
such authoritative scriptures. This is the first stage of association with pure
devotees.
(The Nectar of Devotion).

In the second stage, after one becomes a little advanced and mature,
he automatically offers to follow the principles of devotional service under
the guidance of the pure devotee and accepts him as the spiritual master.
(The Nectar of Devotion).

In the next stage, under the guidance of the spiritual master, the devotee
executes regulative devotional service, and as a result of such activities,
he becomes freed from all unwanted occupations. When he is freed from
unwanted occupations, his faith becomes steadily fixed, and he develops a
transcendental taste for devotional service, then attachment, then ecstasies,
and in the last stage there is pure love of Godhead. These are the different
stages of the development of pure love.
(The Nectar of Devotion).

Only the most fortunate persons can achieve such success in life. Those who
are simply academic students of the Vedic scriptures cannot appreciate how
such a development takes place. In the Nārada-pañcarātra Lord Śiva therefore
tells Pārvatī, "My dear supreme goddess, you may know from me that
any person who has developed the ecstasy of love for the Supreme Personality
of Godhead, and who is always merged in transcendental bliss on account
of this love, cannot even perceive the material distress or
happiness coming from the body or mind."
(The Nectar of Devotion).