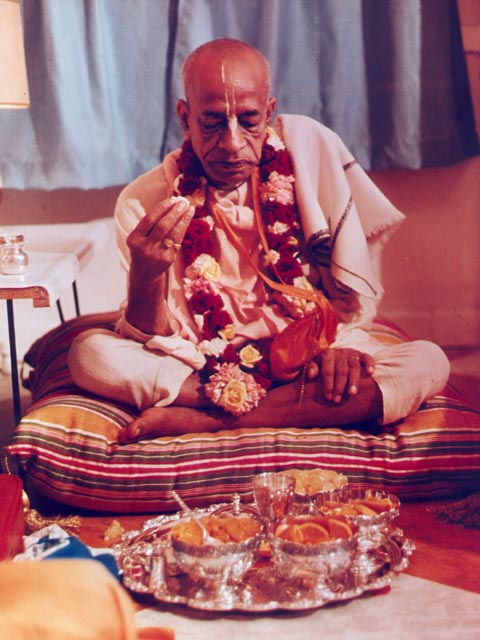 This is a material example, but the devotee is praying that he may develop a
similar spontaneous attachment for the Supreme Lord, free from any
desire for profit and without any other cause. This natural attraction for
the Lord is the perfectional stage of self-realization.
(The Nectar of Devotion).

In the Padma Purāṇa there is a statement about submission in humbleness.
It is stated there, "My dear Lord, there is no sinful living entity who is more
of a sinner than myself. Nor is there a greater offender than myself.
I am so greatly sinful and offensive that when I come to confess my sinful
activities before You, I am ashamed."
This is a natural position for a devotee.

As far as the conditioned soul is concerned, there is no wonder that he has
some sinful activities in his past life, and this should be admitted and
confessed before the Lord. As soon as this is done, the Lord excuses the
sincere devotee. But that does not mean that one should take advantage
of the Lord's causeless mercy and expect to be excused over and over again,
while he commits the same sinful activities.
Such a mentality is only for shameless persons.
(The Nectar of Devotion).

In the Nārada-pañcarātra there is a statement of submission accompanied
by the desire for perfection. The devotee says, "My dear Lord, when shall
that day come when You will ask me to fan Your body, and according to
Your pleasure, You will say, 'You just fan Me in this way'?"

The idea in this verse is that the devotee is desiring to personally fan the body
of the Supreme Personality of Godhead. That means that he is desiring
to become the personal associate of the Supreme Lord.
(The Nectar of Devotion).

One should learn how to cry for the Lord. One should learn this small technique,
and he should be very eager and actually cry to become engaged in some
particular type of service. This is called laulyam, and such tears are the price
for the highest perfection. If one develops this laulyam, or excessive eagerness
for meeting and serving the Lord in a particular way,
that is the price to enter into the kingdom of God.
(The Nectar of Devotion).

In Skanda Purāṇa the glories of these prayers are stated as follows:
"Devotees whose tongues are decorated always with prayers to Lord Kṛṣṇa
are always given respect even by the great saintly persons and sages,
and such devotees are actually worshipable by the demigods."

In the Nṛsiḿha Purāṇa it is stated, "Any person who comes before the Deity
of Lord Kṛṣṇa and begins to chant different prayers is immediately relieved
from all the reactions of sinful activities and becomes eligible,
without any doubt, to enter into the Vaikuṇṭhaloka."

In the Padma Purāṇa: "A person who honours the prasāda and regularly eats it,
not exactly in front of the Deity, along with caraṇāmṛta (the water offered to
the lotus feet of the Lord, which is mixed with seeds of the tulasī tree),
immediately can achieve the results of pious activities which are
obtained through ten thousand performances of sacrificial rites."

In the Hari-bhakti-sudhodaya there is a statement about the incense which is
offered in the temple: "When the devotees smell the good flavour of the
incense which is offered to the Deity, they thus become cured of the
poisonous effects of material contamination, as much as one becomes
cured of a snakebite by smelling the prescribed medicinal herbs."

The explanation of this verse is that there is an herb found in the jungles
which expert persons know how to use to revive the consciousness of one
who is bitten by a snake. Simply by smelling that herb one becomes
immediately relieved of the poisonous effects of the snakebite.
The same example is applicable: when a person comes to visit the temple
and smells the incense offered to the Deity,
he is cured at that time from all his material contamination.
(The Nectar of Devotion).

It is confirmed in Śrīmad-Bhāgavatam, "One who has not washed off all
reactions of sinful activities cannot be a pure devotee. A pure devotee has
no more doubts about the supremacy of the Personality of Godhead,
and thus he engages himself in Kṛṣṇa consciousness and devotional service."

In the Viṣṇu-dharmottara there is a statement about touching the lotus feet
of the Lord. It is said, "Only a person who is initiated as a Vaiṣṇava
and is executing devotional service in Kṛṣṇa consciousness
has the right to touch the body of the Deity."

In the Varāha Purāṇa there is a statement praising the seeing of the
Deity of Śrī Kṛṣṇa in the temple. A devotee says there, "My dear Vasundharā,
any person who goes to Vṛndāvana and sees the Deity of Govindadeva
is free from the courthouse of Yamarāja and is allowed to enter
into the highest planetary system, in which reside the demigods."

In the Skanda Purāṇa there is the following description of the result of
seeing ārati (worship) of the Deity: "If someone sees the face of the Lord
while āratiis going on, he can be relieved of all sinful reactions coming
from many, many thousands and millions of years past."