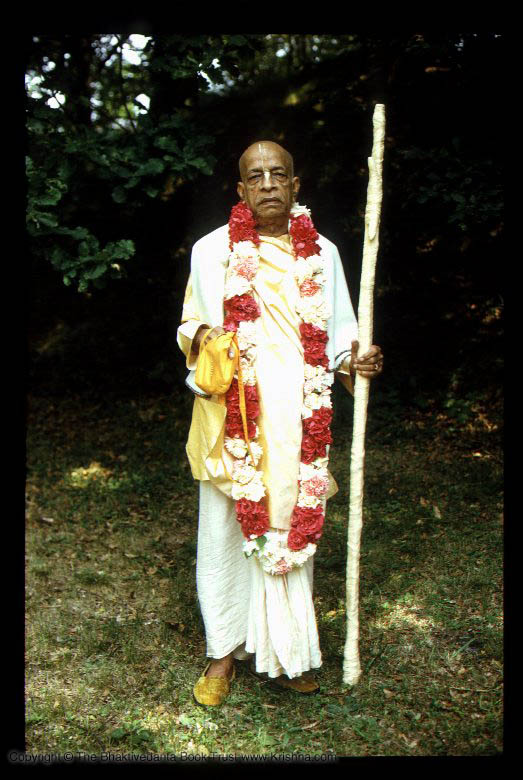 In the Brahma-vaivarta Purāṇa it is said that one who observes fasting on Ekādaśī day is freed from all kinds of reactions to sinful activities and advances in pious life. The basic principle is not just to fast, but to increase one's faith and love for Govinda, or Kṛṣṇa. The real reason for observing fasting on Ekādaśī is to minimize the demands of the body and to engage our time in the service of the Lord by chanting or performing similar service. The best thing to do on fasting days is to remember the pastimes of Govinda and to hear His holy name constantly.
(Nectar of Devotion).

By studying Śrīmad-Bhāgavatam, we can obtain information about our eternal relationship with the Supreme Lord, understand the procedure by which the Lord can be attained and receive the ultimate realization, which is love of Godhead. In explaining to Prakāśānanda Sarasvatī how one can achieve the Supreme Personality of Godhead by devotional service, Lord Caitanya quoted a verse from Śrīmad-Bhāgavatam (11.14.21) in which the Lord says that He can be realized only through devotional service executed with faith and love. Indeed, it is devotional service alone which purifies the heart of the devotee and elevates him to the ultimate realization by which he, established in faith, renders service unto the Supreme Lord.
(Teachings of Lord Caitanya).

A well-to-do householder Vaiṣṇava cannot live like a person in the renounced order who completely takes shelter of the holy name. Such a householder should chant the holy name of Kṛṣṇa in the morning, at midday and in the evening. Then he will be able to cross beyond nescience. Pure devotees in the renounced order, however, who fully surrender to the lotus feet of Kṛṣṇa, should chant the holy name of the Lord with great love and faith, always thinking of Kṛṣṇa's lotus feet. They should have no occupation other than chanting the holy name of the Lord. In the Bhakti-sandarbha (283), Śrīla Jīva Gosvāmī says:
yady api śrī-bhāgavata-mate pañca-rātrādi-vad-arcana-mārgasyāvaśyakatvaṁ nāsti, tad vināpi śaraṇāpatty-ādīnām ekatareṇāpi puruṣārtha-siddher abhihitatvāt.
"It is Śrīmad-Bhāgavatam's opinion that the process of Deity worship is not actually necessary, just as the specific prescriptions of the Pañcarātra and other scriptures do not have to be followed. The Bhāgavatam enjoins that even without practicing Deity worship one can achieve the complete success of human life by any of the other devotional processes, such as simply offering oneself at the Lord's feet for His protection."
(Sri Caitanya Caritamrta------3:6:223------purport).

Anyone who reads and hears these pastimes with faith and love can understand the truth about devotional service, devotees and the transcendental mellows of the pastimes of Lord Śrī Caitanya Mahāprabhu.
(Sri Caitanya Caritamrta------3:5:163------translation).

All devotees should hear about Śrī Caitanya Mahāprabhu's pastimes with faith and love. By the grace of the Lord, one can thus attain shelter at His lotus feet.
(Sri Caitanya Caritamrta------2:25:269------translation).

"To those who are constantly devoted to serving Me with love, I give the understanding by which they can come to Me." The actual mission of human life is to understand Kṛṣṇa and return home, back to Godhead. Therefore one who is sincerely engaged in the service of the Lord with love and faith can talk with Kṛṣṇa and receive instructions by which he can speedily return home, back to Godhead. Today many scholars defend the science of religion, and they have some conception of the Supreme Personality of Godhead, but religion without practical experience of the Supreme Personality of Godhead is no religion at all. Śrīmad-Bhāgavatam describes this as a form of cheating. Religion means abiding by the orders of Kṛṣṇa, the Supreme Personality of Godhead. If one is not qualified to talk with Him and take lessons from Him, how can one understand the principles of religion? Thus talks of religion or religious experience without Kṛṣṇa consciousness are a useless waste of time.
(Sri Caitanya Caritamrta------2:4:95------purport).

Actual self-realization means becoming a pure devotee of the Lord. The existence of a devotee implies the function of devotion and the object of devotion. Self-realization ultimately means to understand the Personality of Godhead and the living entities; to know the individual self and the reciprocal exchanges of loving service between the Supreme Personality of Godhead and the living entity is real self-realization. This cannot be attained by the impersonalists or other transcendentalists; they cannot understand the science of devotional service. Devotional service is revealed to the pure devotee by the unlimited causeless mercy of the Lord. This is especially spoken of here by the Lord—mat-prasādena, "by My special grace." This is also confirmed in Bhagavad-gītā. Only those who engage in devotional service with love and faith receive the necessary intelligence from the Supreme Personality of Godhead so that gradually and progressively they can advance to the abode of the Personality of Godhead.
(Srimad Bhagavatam------3:27:28-29------purport).

A person in full Kṛṣṇa consciousness acts by the dictation of Kṛṣṇa. In the beginning of Kṛṣṇa consciousness, dictation is received through the transparent medium of the spiritual master. When one is sufficiently trained and acts in submissive faith and love for Kṛṣṇa under the direction of the bona fide spiritual master, the dovetailing process becomes more firm and accurate. This stage of devotional service by the devotee in Kṛṣṇa consciousness is the most perfect stage of the yoga system. At this stage, Kṛṣṇa, or the Supersoul, dictates from within, while from without the devotee is helped by the spiritual master, who is the bona fide representative of Kṛṣṇa. From within He helps the devotee as caitya, for He is seated within the heart of everyone. Understanding that God is seated within everyone's heart is not, however, sufficient. One has to be acquainted with God from both within and without, and one must take dictation from within and without to act in Kṛṣṇa consciousness. This is the highest perfectional stage of the human form of life and the topmost perfection of all yoga.
(Srimad Bhagavatam------3:15:45------purport).

The qualification of bhakti, or devotional service to the Lord, is that the devotee should be free from all material contaminations and desires. This freedom is called vairāgya, or renouncement of material desires. One who engages in devotional service to the Lord according to regulative principles is automatically freed from material desires, and in that pure state of mind one can realize the Personality of Godhead. The Personality of Godhead, being situated in everyone's heart, instructs the devotee regarding pure devotional service so that he may ultimately achieve the association of the Lord. This is confirmed in Bhagavad-gītā (10.10) as follows:
teṣāṁ satata-yuktānāṁ
bhajatāṁ prīti-pūrvakam
dadāmi buddhi-yogaṁ taṁ
yena mām upayānti te
"To one who constantly engages in the devotional service of the Lord with faith and love, the Lord certainly gives the intelligence to achieve Him at the ultimate end."
One has to conquer the mind, and one may do it by following the Vedic rituals and by performing different types of sacrifice. The ultimate end of all those performances is to attain bhakti, or the devotional service of the Lord. Without bhakti one cannot understand the Supreme Personality of Godhead. The original Personality of Godhead or His innumerable expansions of Viṣṇu are the only objects of worship by all the Vedic rituals and sacrificial performances.
(Srimad Bhagavatam------3:13:39------purport). 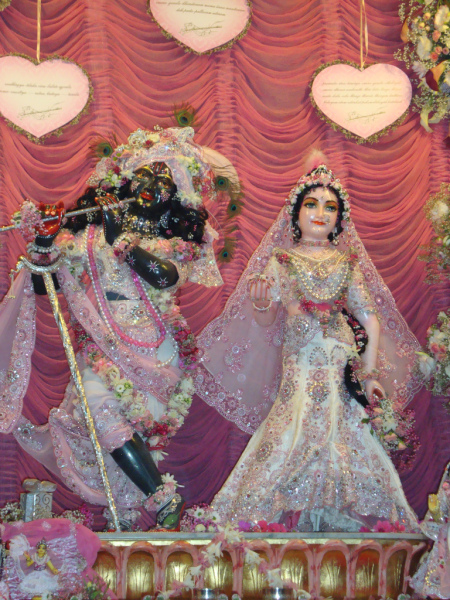 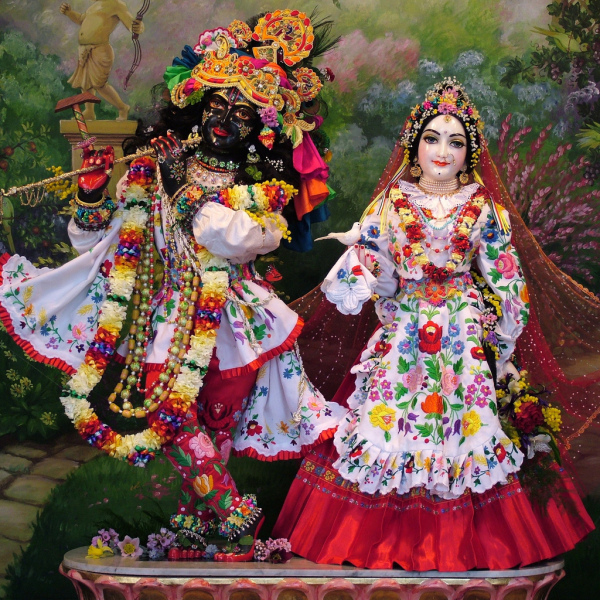 Tags: ‏, and, faith, is, love, of, significance, the, what
Email me when people reply –
Follow