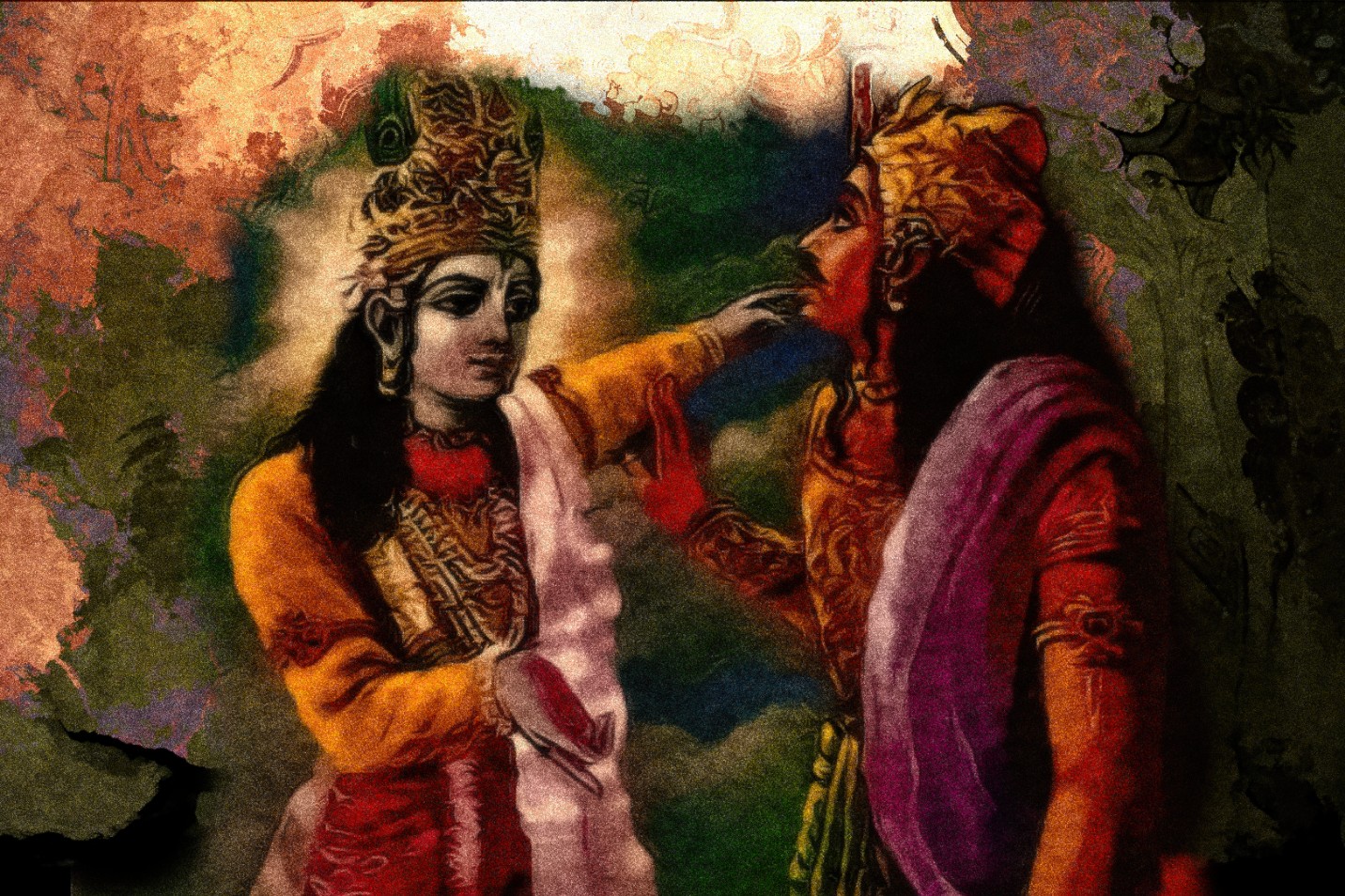 Popular wisdom, from doctors and moms alike, is that yoga and happiness go hand in hand. Photographs and renditions of enlightened yogis often wear beatific smiles. So ingrained is this image, of the peaceful, blissful yogi, that sometimes even dedicated practitioners are lured into a false imitation of the state of brahma-nirvana (transcendence) or samadhi (trance), seeking to meet the expectations of a yoga culture that puts happiness up on a pedestal. But are “real” yogis immune to despair? Is despondency somehow antithetical to yoga? The premier treatise on Yoga philosophy, the Bhagavad Gita–a classic from ancient India–sheds some light on these questions and, in doing so, expands our understanding and appreciation for the human condition.

First, however, we should consider: Who is, in fact, a yogi? Is it someone who can contort his or her body into uncomfortable and impossible postures? Or is it a person who performs asanas (yoga poses) on a regular basis? According to yoga philosophy, neither comes close. The yoga tree has many branches, of which asana yoga is but a twig on the ashthanga branch. The word yoga is derived from the Sanskrit root yuj, which means to join, unite or connect; but with what exactly? With that, for which the yoga texts have many names: Bhagavan, Paramatma, Brahman, and Isvara, among others. English translations of these terms range from flourishing interpretations such as the Divine root of all existence or the Superconsciousness, to the more simple such as Reality or God. Therefore, a yogi, in the broadest sense, is someone who practices a connection with the Divine. However, the term is usually reserved for those who practice under the direction of a teacher or guru who is part of one of the recognized ancient lineages (paramparas) of yoga teachers. But what could feeling blue have to do with yoga?

The first chapter of the Bhagavad Gita is titled: Arjuna-vishada yoga or Arjuna’s yoga of despair. Upon a cursory reading, this chapter simply introduces the main characters and sets the stage for the famous teachings of Krishna to Arjuna that begin in chapter two. Except for, perhaps, the renowned first verse which highlights the ethical, existential and cosmic tensions underlying the Gita’s essential teachings, many readers, and even some teachers, often dismiss the first chapter of the Gita for its apparent lack of philosophical content. However, in so doing, they miss the very first teaching of the Gita, a lesson in the human condition, reflected in Arjuna’s plight.

At the dawn of an epic battle between the forces of good and evil, Arjuna, a general in the Pandava army (the good guys) is drawn, on a chariot, to the center of the battlefield by his illustrious friend, Krishna. From his vantage point, Arjuna is able to see the faces in the opposing army, ready to fight to the death. He sees amongst the people he is prepared to slay, his dearly beloved gurus, uncles, brothers, and the revered Bhishma; the grandfather who had sheltered and protected him and his brothers when they had lost their father as children. So intense is the despair that comes over Arjuna at the sight of his loved-ones in the enemy ranks, that this great general, fierce warrior, and celebrated yogi casts aside his weapons, his mind reeling, sits back down on his chariot, “tormented by sorrow.” (BG 1. 47, trans. Schweig)

When I first read about Arjuna’s predicament, I never quite appreciated the magnitude of his despair. This was, in part, due to the straightforwardness of the good versus evil dichotomy with which I was presented. I could not see why Arjuna was so heartbroken when he knew that his enemies were malicious and wrong and needed to be stopped. But over the years, I have learned that our choices in life rarely ever stand in such stark contrast, and neither did Arjuna’s. Many of the people who stood in his opposition, like grandfather Bhishma, were righteous and loving relatives with their own reasonable, obligatory and circumstantial, reasons for finding themselves in the army of the evil-minded Duryodhana. The other cause of my inability to fully relate to Arjuna’s plight was the simple reason that I had never had to openly challenge (let alone kill!) my beloved teachers and loved-ones on moral and ethical grounds. Can you imagine the experience of putting an end to, not one, but most, of your dearest relationships with the people whom you’ve grown to love and respect over years of attachment and affection? This was Arjuna’s difficult and devastating dilemma.

Arjuna’s outer conflict precipitated an inner conflict and in his moments of intense despair he turned to Krishna, who transformed from a friend to a teacher, a guru. Had he not had the courage to be honest and vulnerable, in revealing his weakness to Krishna, there would be no Bhagavad Gita. He would not have received Krishna’s yoga-wisdom that ultimately inspired him to face the challenge ahead and uplifted him into resolute action performed as yoga. By approaching a trusting and qualified guide, Krishna, in open and honest dialogue, in being real with his weakness of heart, Arjuna turned his despair into yoga, vishada yoga.

Too often, practitioners of yoga, especially within yoga communities, shy away from expressing their dejection or depression. We choose to maintain a veil of impenetrability, as if we were already immune to the vicissitudes of time and the tumult of existence. We fear voicing our pains and struggles to others because that would reveal the chains of attachment that bind us to this temporary world. But, by so doing, we neglect the first teaching of the Gita. We forget that even Arjuna was depressed, and what qualified him to “rise up in yoga” (BG 4.42) was his full disclosure to his friend and teacher, Krishna. In expressing his weakness, Arjuna took his relationship with Krishna to a whole new level, and therein received the inner strength and composure that we all need in our own “Arjuna moments”.

Yoga is a state of existence that can be practiced in love, in work, in wisdom, in meditation, in happiness, and even in weakness and despair. Some teachers even insist that yoga is better practiced from a place of suffering, because life’s challenges make us yearn for something higher, something that will bring us out of our misery, and yoga certainly enables to do that. On some level, yogi or not, we all are faced with “Arjuna moments” as we move along our path in life. In our own moments of despair, by turning to the pages of the Bhagavad Gita, or another inspired text, or an authentic guru who shares our love and trust, with sincerity, we too can, “in all circumstances, be a yogi.” (BG 6.46, trans. Bhaktivedanta Swami)

I would like to acknowledge that this article is inspired from the lectures of Professor Graham Schweig and his Gita translation and commentary, Bhagavad Gita: The Beloved Lord’s Secret Love Song.