Yajigrama is a tiny village 4km from Katwa, viz. 1 hour from Navadvipa town or 2 hours’ drive from Mayapur via road trip. Katwa is where Lord Caitanya Mahaprabhu took sannyasa from Kesava Bharati. Yajigrama is important place connected with many most wonderful pastimes of three Vaishnava stalwarts – Srila Narottama Das Thakura, Srila Shrinivasa Acharya and Srila Ramchandra Kaviraj. After the disappearance of the manifest pastimes of Sri Caitanya Mahaprabhu, Nityananda Prabhu and their associates, Srila Narottama Das Thakura, Shrinivasa Acharya and Sri Shyamananda Prabhu, under the instructions of Six Gosvami’s of Vrindavana, propagated the Krishna Consciousness movement.

One day, Shrinivasa Acharya was sitting on the bank of a pond to the west of his house at Yajigrama when he saw a marriage party passing nearby. The bridegroom, who was being carried on a palanquin, was extremely attractive. His skin was the color of a golden ketaki flower, face was effulgent like the full moon, eyes were like lotus petals, and neck like a conch shell. He had a slender waist, and well-shaped thighs. He wore silken cloth, had a garland of flowers, and his body was adorned with sandalwood paste.

Shrinivasa thought to himself, ‘‘Is he the son of a Gandharva? Or Kamadev himself? Such a beautiful person should certainly utilize his life in the service of Lord Krishna. Otherwise what is the use of such extraordinary beauty?’’

Shrinivasa inquired about the bridegroom from some members of the marriage party, and was informed that the young man was Sri Ramachandra Kaviraj, a great scholar with qualities equal to those of Brihaspati or Sarasvati. He belonged to a high-class family, was a famous physician, and was formerly a resident of Kumaranagar. After obtaining this information, Shrinivasa returned to his house, and Ramachandra, who had overheard Shrinivasa enquiries, returned to his place.

Shrinivasa Acharya declared that they had a long, deep-rooted relationship, and were meeting again after a long separation. He then chanted krsna-nāma in his ear and sang rādhā-krsna-līlā to him. He also assisted Ramachandra in the study of Vaishnava literatures, and blessed him to become a dearest lover and devotee of Krishna. Shrinivasa told Ramachandra about the glories of Narottama. In due course of time, Narottama and Ramachandra became such good friends that people considered them to be like one soul.

Sri Govinda Das Kaviraj was the youngest brother of Ramachandra Kaviraj. He was also a stalwart devotee of Lord Krishna and had written several Vaishnava bhajans including famous ‘Bhaja He Re Mana’. Govinda Das initially worshipped Durga on account of his grandfather being a servitor of Durga. Seeing his elder brother Ramachandra jubilantly practicing and advancing in Krishna consciousness, he also deeply desired to worship Lord Krishna. Seeing unflinching desire of Govinda Das, Durga-devi one day appeared in his dream and blessed Govinda Das to take to devotion to Lord Krishna. Since Govinda Kaviraja, the author of two books, Sangita-madhava and Gitamrita, was a great Vaishnava kavi, or poet, Srila Jiva Gosvami gave him the title Kaviraja. 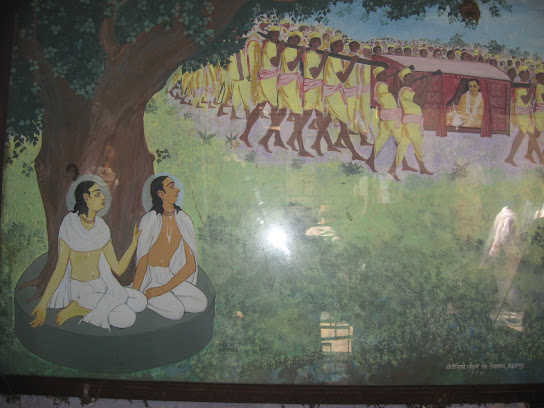 One day, as Shrinivasa was entering into the compound of his house with Ramachandra, they saw what appeared to be a snake. Shrinivasa jumped across it in fear. Ramachandra Kaviraj searched for the snake but was unable to find it. Rather, he discovered that Prabhu had mistaken a coil of straw to be a snake. Nevertheless, he did not contradict his master. When Shrinivasa himself discovered that it was a coil of straw and pointed it out, Ramachandra at once accepted his opinion. Later, when the wife of Shrinivasa were resting, Sri Acharya came and began to explain the exalted characteristics of Ramachandra. He compared Ramachandra to Arjuna by citing a story from the Mahabharata.

Shrinivasa took great pleasure in describing this incident and comparing Kaviraj to Arjuna. Ramachandra never disobeyed his master. He always sincerely listened to Prabhu, even when the latter ordered him to take his food after everyone else. Shrinivasa further described Ramachandra’s faithfulness by citing the time when he himself had mistaken a coil of straw to be a snake, and although Ramachandra knew this, he nevertheless tried to find the snake in the courtyard as ordered by Shrinivasa.

Narottama-vilasa, complied by Srila Narahari Thakura narrates: One day while Lord Caitanya was dancing with His associates during Sankirtana, He suddenly looked in the direction of Kheturi village (now in Bangladesh). A peculiar look appeared on His face, tears swelled in His eyes and He cried out the name “Narottama! Narottama!” again and again. The ocean of mercy, Nityananda Prabhu shouted in joy, and Haridasa Thakura, Vakresvara and others were inexplicably filled with happiness.

Witnessing the unusual behaviour of the Lord, the devotees began talking amongst themselves: “Mahaprabhu is repeatedly calling out the name of someone called Narottama. It seems that this Narottama is extremely dear to the Lord, perhaps he is about to take birth soon. Oh, who is that fortunate man who will have such a son? The women who bears him within her womb is the most fortunate lady in the world. Obviously, the Lord has plans for this Narottama to fulfil His mission.” In this way the rumours of the appearance of Narottama spread far and wide.

The songs of Srila Narottama Das Thakura are accepted by great Vaishnava authorities like Srila Visvanatha Cakravarti Thakura, as the Vedic evidence and to be as good as the Vedas. The Six Goswamis of Vrindavana wrote vast amount of scriptures according to the order of Lord Caitanya. In the same way, following in the footsteps of the Goswamis, Srila Narottama Das Thakura and Srila Bhaktivinoda Thakura, out of compassion for the fallen people of this age, composed their songs in simple Bengali language. These songs are the pinnacle of devotion. By singing and listening to these songs, one can discover the lost treasure of pure love to Supreme Lord.

Two most prominent works of Narottama Das Thakura are: Prarthana and Prema-Bhakti-Candrika. They are in reality the outpourings of a pure heart crying in separation from Gauranga Mahaprabhu and Radha-Govinda. Bhajans of Srila Narottama Das Thakura are full of humility, eagerness and anxiety for devotional perfection. Although Srila Narottama Das Thakura was a devotee of highest order, he composed these books placing himself on the level of a conditioned soul who is crying for the mercy of the Lord, because of his forgetfulness since time immemorial. Singing these songs causes the mind to reflect the mood of pure devotion, and the heart to feel intense separation from Sri Sri Radha and Krishna.

Srila Gaura-kisora Dasa Babaji was once asked how to develop love of God, to which he replied, “It costs only five annas.” The inquirer did not know the meaning of Babaji Maharaj’s statement. Srila Gaura-kisora Dasa Babaji repeated himself, and then told the inquirer to go to the market with 5 annas and purchase two books by Srila Narottama Das Thakura: Prarthana and Prema-Bhakti-Candrika. He instructed that by reading and meditating on the contents of these two books daily, one will develop love of God.

Srila Bhaktisiddhanta Sarasvati Thakura used to tell his disciples that to attain the perfection of life they must know, practice and realize the teachings contained within three books: Prarthana, Prema-Bhakti-Candrika and Upadesamrta.

Once after taking initiation from Srila Lokanatha Gosvami, Narottama Das Thakura sat in a Vraja nikunja absorbed in bhajana. Suddenly Srimati Radhika appeared before him and request: “Your eternal service is to come to My kunja and stir milk for My Pranavallabha. Since Campakalata also does this service, your name will be Campaka-manjari.” When Lokanatha Gosvami heard about this, he became ecstatic, and confirmed that indeed this was Narottama Das Thakura’s eternal service to Sri Sri Radha and Krishna.