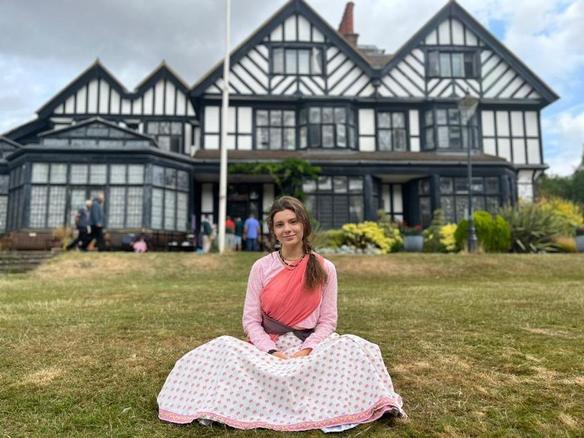 My name is Yuliia Mudrak, I am 25 years old, and I am from Ukraine. Before the war, I lived in Kyiv and worked as a certified preschool-teacher. Unfortunately many devotees had to leave their normal life in Ukraine due to the war. But at the same time, we’ve been able to see wonderful examples of devotees in other countries, who show great concern for us Ukrainian devotees.

For the first two days of the war, I stayed in my apartment close to the temple. However when it became too unsafe, I, like many other devotees who lived near the temple, went to live there. There is a very large temple in Kyiv, so it was a good idea to move there at that time. We lived there as a big family for several days, and every time the air raid siren went off, we went down into the basement until it was safe to emerge again. Very often during those times we would have kirtana, so with the company of devotees even war has its bright side.

One evening, Acyuta Priya prabhu said that it was now also too dangerous in Kyiv and he advised us to evacuate. So the next day the Deities, as well as the brahmachari and the brahmacharini ashrams were evacuated. Almost all the devotees left the temple that following morning.

I decided to go to Poland. First, we went to Lvov together with a few other devotees and we were all received so nicely at the temple and spent the night there. The next day I arrived in Warsaw. One devotee took us to the Warsaw temple and we stayed there for 3 days. During this time, I had the good fortune to do some service and also meet Mataji Nareshwari, who lives in the temple and serves the Deities. She put a lot of effort into taking care of us, and I am very grateful to her for that.

Shortly after that I saw an announcement that the Vaishnava community at the Almvik Farm in Sweden was inviting Ukrainian devotees to serve at their temple. This was being arranged through the ISKCON Relief Team. I called the contact number and Mataji Saraswati Gopi who is the ISKCON Relief Coordinator for Sweden, answered the phone. When I heard her voice, I just knew I should go there so on the very same day I went via ferry to Sweden. After 18 hours we arrived on the shores of Sweden. The next day myself and three other young refugee devotees were picked-up at the port by Narada prabhu, a young devotee who lives at the Almvik community. On the way there he said that we were going to a wonderful place and I can confirm that after 5 months of my stay here, he was absolutely right! 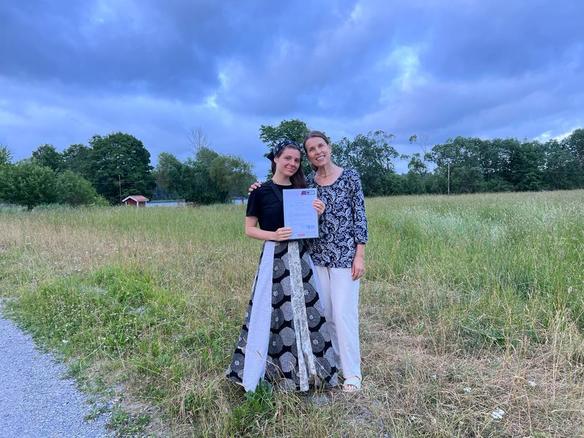 Almvik is about 50 km south of Stockholm, located in a beautiful forest. Immediately after our arrival, Saraswati Gopi, Lalita Sahki, Krishna Bhakti, Shri Prada and Kamala Priya Matajis began to take care of us with incredible dedication. They helped us settle down and provided us with all our necessities. Similarly, many other devotees helped us so much while we were there. Some time after our arrival Kamala Priya and Saraswati Gopi Matajis arranged to take part in an EU funded Erasmus+ volunteer project that operates here in Almvik. This is a project for European youth and it includes services in the temple and community, language learning, excursions in Sweden and even sewing or art workshops. All these fit into 32 hours a week. So I signed a Volunteering Agreement for 2 months. The mentor and coordinator of the volunteering project is Mataji Kamala Priya.

During my time as a volunteer, I served as a pujari assistant, cooked breakfasts and dinners for the devotees, kept the temple clean, for 8 hours a week I was babysitting a little Vaishnavi while her mother was doing service, I visited many places of sightseeing in Stockholm, visited a Waldorf-school and their nursery kindergarten, and also the ISKCON temple in Korsnäs which is not so far away. I also sewed a nice gopi dress as part of a project with the support of Mataji Krishna Bhakti. Also, while living in Almvik, I was able to attend morning and evening programs and several times I was able to attend Harinamas in Stockholm. The volunteer project also helped me financially so that I could buy clothes and other necessary things, pay my ticket to fly to London and in addition giving me some monthly pocket money.

Throughout my stay at the Almvik community, the devotees helped me solve all the difficulties that arose and took great care of me. In particular, when I had health problems in April, Mataji Kamala Priya, Sarasawati Gopi and Jivakesha helped me to overcome them and repeatedly made appointments with doctors and drove me several times to a specialist in Stockholm.

During this time I met Mataji Lalita Sakhi from London. She came with her husband Shyamasundara prabhu for a week to visit the Almvik community. She told me about the legendary Bhaktivedanta Manor temple and I really wanted to visit there. Lalita Sakhi then said that I could come to England under the assistance program for Ukrainians and stay at her house, not far from the temple. Mataji Inna who is the ISKCON Relief Coordinator for the UK helped me a lot to obtain a visa. She does a great service, coordinating the British and Ukrainian devotees so that they can find each other.

Last week, on June 21st, mataji Kamala Priya drove me to the airport and I flew to London. Mataji Lalita Sakhi and Shyamasundara prabhu kindly received me at the airport and brought me to their home. They are taking great care of me now and helping with all the paperwork and adaptation.
We do not know when the war in Ukraine will end. I hope it will happen as soon as possible. For now I want to make good use of my stay here in England. Now my plans are to work at the Manor gurukula, starting from September 2022. My work will be to help the Ukrainian children adapt to English-speaking society and help them with translation. I will also do service at the temple, attend the programs and improve my own English skills.

All glories to all the devotees who are now helping the Ukrainian yatra and to the ISKCON Relief Team who are coordinating so expertly. Your care is invaluable. And I want to express my special gratitude to the Swedish devotees Mataji Saraswati Gopi and Kamala Priya, who are immersed in service to the devotees with all their hearts, and also the English devotees mataji Inna and Lalita Sakhi, as well as Shyamasundara prabhu who take care of me here in England.