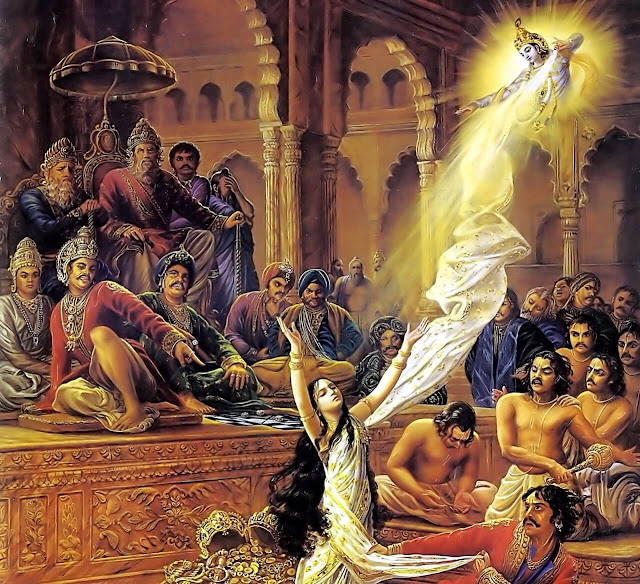 Being born in this world is not easy and being born as a woman is definitely not easy and being a chaste woman and trying to live a principle-centered life is definitely, definitely not easy. The struggles a woman goes through being a wife, raising children and running a family is many times beyond comprehension and very often, overlooked. Running an empire is easier than running a family. But probably the biggest challenge of womanhood is in being understood. Every woman looks for some man to empathize with her struggles and see her side of the picture. But instead of being understood, she is more often than not, misunderstood and exploited by the stronger sex.

One of the reason Lord Krishna appears in this world is to protect chaste ladies and teach a lesson to all those who try to exploit the innocent womenfolk. Krishna was born to help his helpless mother, Devaki who was being tortured by wicked Kamsa. Krishna cried seeing the suffering of Kunti Devi and stood by her at all times giving protection and solace to this devoted widow. Krishna married Rukmini who was being forcibly married to Sishupala even though she had absolutely no liking for him. He married the 16,100 girls who were rejected and shunned away by society for being touched by Baumasura.

Probably Lord Krishna was the only one who found a fault in the otherwise faultless Bhismadeva and rebuked him for kidnapping Amba without her consent and thereby destroying her life. He was always there for Draupadi in all her difficult times, took a unique incarnation as her saree and personally took onus to do justice for all the atrocities done to her and to meet out befitting replies to all those who tried to exploit her. Lord Krishna cried alongside Subadhra, gave her a lot of love and stood by her side when she lost her only son, young Abhimanyu. He also empathized with the grieving Gandhari, the mother of the notorious, deceased Kauravas. He empathized with the wives of Duryodhana and the wife of Karna for He knew that they were innocent and had tried their best to give wisdom to their wayward and adamant husbands. The list can go on and on. But I think you get the point.

Lord Krishna was one personality who understood the misunderstood and mistreated womenfolk and showed kindness and showered protection to them, reassuring them with His "Abhaya mudra". If the men follow the footsteps of the Lord in this regard, the world will be a much better place to live in because a world where women are mistreated and abused will always be filled with unlimited miseries and anxieties whereas the world in which women are respected and honoured will be filled with unlimited prosperity and happiness. That is the law of the Almighty. No one can break it; we can only break ourselves against it. Let men not make a mistake of considering the womenfolk to be weak because who can be weak with the strength of God personally protecting them.