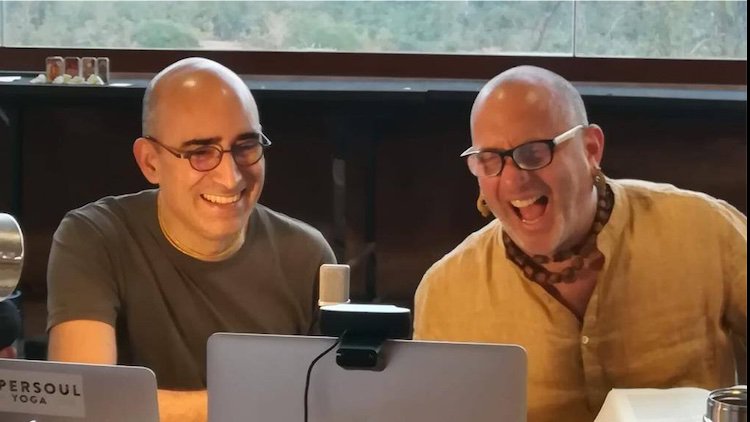 A popular Zoom conference, Wisdom of the Sages, has gone public and become a daily podcast, delivering transformational wisdom, Bhakti-yoga philosophy, and profound stories with fun and energy on Youtube, Instagram and most podcast platforms.

Hosts Raghunnath Cappo and Kaustubha Das have a comfortable chemistry, having both grown up in the New York Hardcore Punk scene of the early 1980s, found Krishna consciousness, and begun living as brahmacharis in 1988.

When Raghunath went on to share Srila Prabhupada’s teachings through his hardcore band Shelter, and Kaustubha became a book distributor, the two grew close, regularly spending time together in both the U.S. and holy pilgrimage sites in India every year.

Today, Raghunath is a popular yoga teacher, heads up Supersoul Farm retreat center in Upstate New York, and continues to tour with his bands Shelter and Youth of Today. Kaustubha, meanwhile, serves as Senior Educator at the Bhakti Center in Manhattan, and regularly speaks on Bhakti-yoga at yoga studios and universities.

“In March of last year, Raghunath mentioned to me that he wanted to start sharing something daily online, primarily as a way to engage in daily hearing for himself,” Kaustubha says. “I suggested reading Srimad Bhagavatam, and he began meeting a couple of friends at his home at 5:00am every day and broadcasting it live via Zoom conference, and Instagram Live.”

The listernship grew gradually over the following months, and by September forty to fifty people were tuning in every morning, with more downloading and listening later in the day. Kaustubha joined as co-host, and both the audience and their positive feedback continued to grow until the pair decided to take their show from the underground into the open, launching it as a podcast on January 1st, 2020.

To this day, it also remains as a Zoom conference to give the hosts a chance to engage live with their audience – mostly 30 to 45-year-olds from the yoga or hardcore punk worlds, looking for more meaning in life.

“The concept is that hearing the Bhagavatam daily is a super powerful spiritual practice, and when it is done with friends it becomes fun and it is easier to stick with,” says Kaustubha. “Most people will never be able to go to a temple every day, so we share it online via Zoom conference. We read the verses and selected purports and we try to keep it fun and entertaining, almost like a talk show. But because the Bhagavatam is so deep, it brings a lot of spiritual substance to the online gathering.”

He adds: “Neither of us are great Bhagavatam scholars. Our only qualification is that we have had some great teachers and we have heard from Srila Prabhupada. We try to share with others what they have shared with us in a language people can understand. We’ve both been practicing bhakti for over thirty years and have seen a lot. So we try to draw from that experience.”

Wisdom of the Sages is currently broadcasting daily from Raghunath’s yoga teacher training in Govardhana Eco-Village near Mumbai, India until January 25th, and after that in Jaipur and Vrindavan. From February 6th, it will return to New York, where Raghunath and Kaustubha will each call in from their homes. 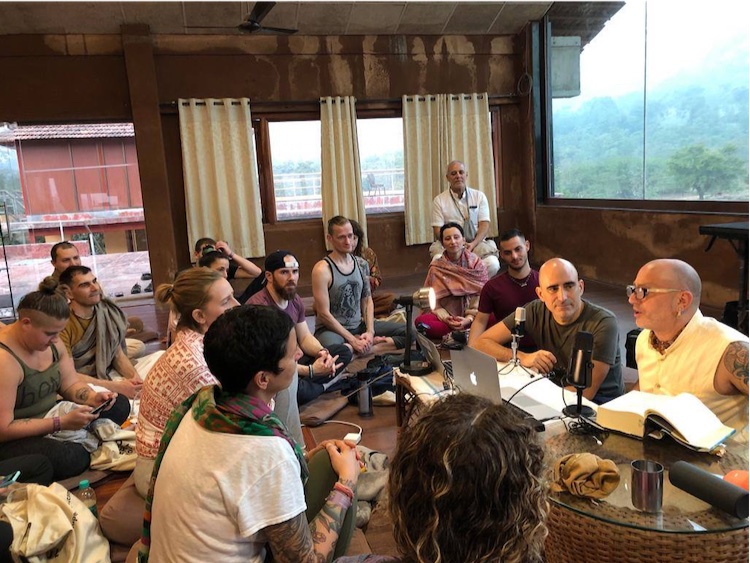 The show is available to watch on Youtube or listen to as an audio podcast, and runs for one hour every day. Each episode begins with a short monologue by Ragunath, followed by invocation mantras. The two hosts then begin reading Bhagavatam verses, dipping into Srila Prabhupada’s purports here and there.

“If an important topic comes up that the audience wants to hear more about, we take the time to get into it,” Kaustubha says. “The audience is really eager to learn more about bhakti and how to apply it in their lives practically. So we share from our life experience as best we can. We try to keep it fun and entertaining, but deep and real.”

During Wisdom of the Sages’ run as a Zoom conference only, Raghunath and Kaustubha read until the end of the fourth Canto of Srimad-Bhagavatam, but they’re going back to the beginning for the relaunch as a podcast.

“The Bhagavatam will take us through many topics, especially how to practice yoga in a practical and dynamic way; keeping an even mind as we pass though challenges; not getting caught up in distractions; staying focused on serving; and remembering God,” says Kaustubha. “We’ll also cover all types of issues from politics, gender issues, and sexuality, to dealing with toxic environments at work, how we relate as bhakti yogis with our families, and more.”

Wisdom of the Sages will also occasionally feature guests, to illustrate how different people live a variety of bhakti-centered lifestyles.

“The show has really been like a support group for practicing Bhakti,” Kaustubha says. “We all share thoughts and questions with each other throughout the day via WhatsApp. And people have found that it is so approachable that their friends and family can relate to it. So it helps them explain what they are getting into. We get comments like ‘I caught my avid atheist husband watching the show on his own today!’”

The show’s Apple Podcasts page is already packed with five-star reviews. “Wisdom of the Sages is truly the centerpiece of my daily spiritual and yoga practice,” says one listener, while another raves, “This is the most incredible podcast in the world. It gets to the essence of what we need most (wisdom) in a way that’s humble, funny and inspiring. I continue to share this with all of my friends and family. It’s great for anyone at any time in their life. So relatable.”

Kaustubha and Raghunath, in turn, have a lot of affection for their listeners. “They’re like a family to us,” says Kaustubha. “A growing family of people who want to practice Bhakti. So we will do our best to serve them any way we can, whether it’s through more online connections, or through workshops, retreats, or pilgrimages.”

Watch the daily Wisdom of the Sages podcast here: https://www.youtube.com/wisdomofthesages