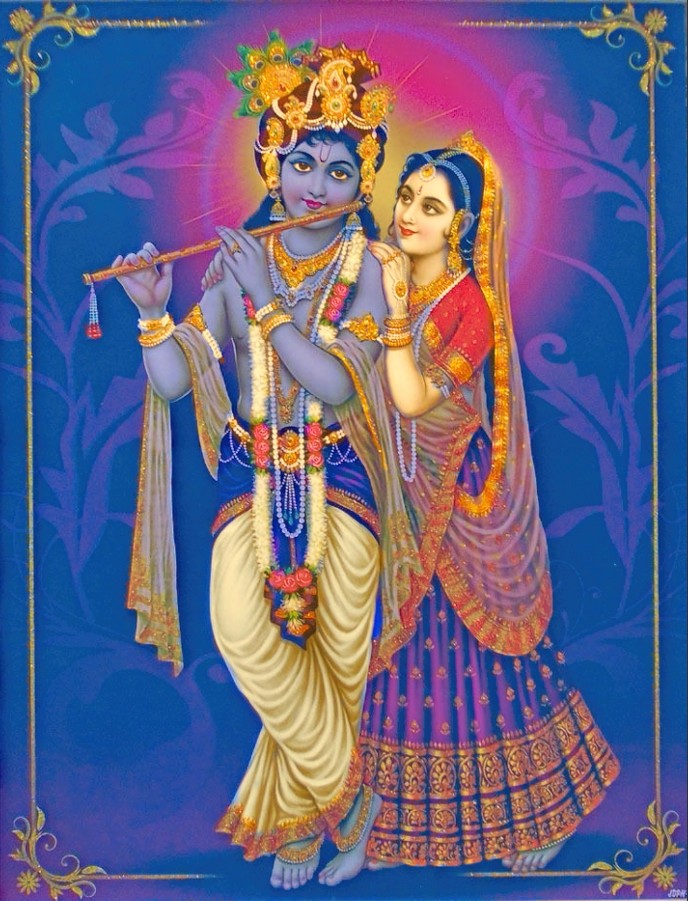 63 I will go to the earth. O demigods, first return to your homes, and then, by your amsa expansions, quickly go to the earth.
64 After speaking to the demigods, Lord Krsna, the master of the universes, called the gopas and gopis and spoke to them words that were sweet, truthful and appropriate.
65 Sri Krsna said: O gopas and gopis, please listen. All of you please go to Nanda’s land of Vraja. O Radha, please go at once to the home of King Vrsabhanu.
66 King Vrsabhanu’s dear wife is the saintly gopi named Kalavati. She is Subala-gopa’s daughter. She is a partial incarnation of the goddess of fortune.
67 She is fortunate and glorious among women. She was the mind-born daughter of the pitas, but by Durvasa’s curse she was born in a house in Vraja.
68 At once go to Nanda’s Vraja and take birth in her womb. O girl with the lotus face, I will assume the form of a small boy and I will marry You.
69 O Radha, to Me You are more dear than life. To You I am more dear than life also. We are not different. We are one body eternally.
70 Listening, Sri Radha wept, overcome with love. O sage, with Her cakora-bird eyes She drank the moonlight of Lord Krsna’s face.
71 Sri Krsna said: O gopas and gopis, please take birth on the earth in the beautiful palaces of the noble gopas. […]