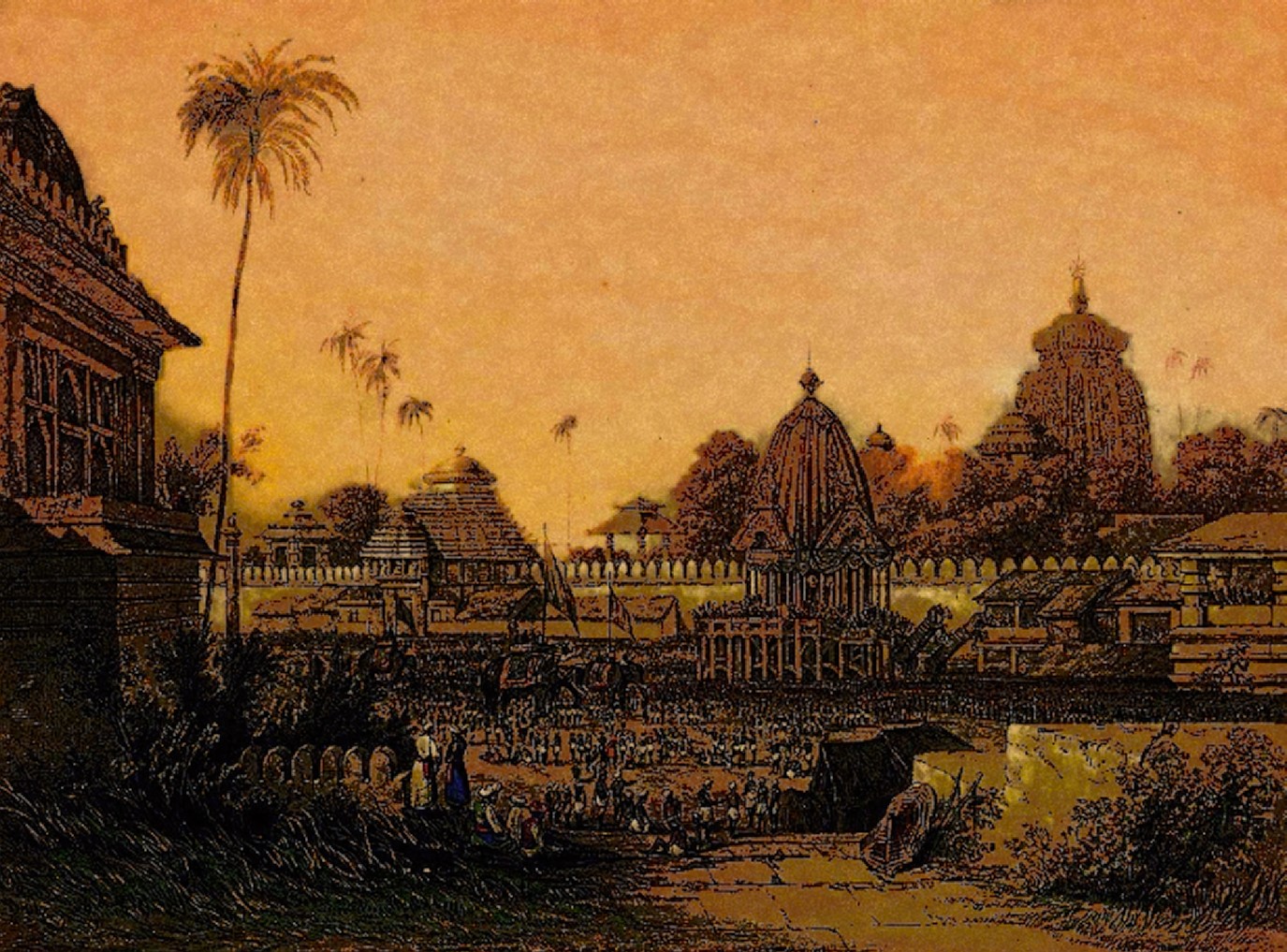 In a unique form, Lord Krishna is worshiped in a famous temple in Puri, India, and at Rathayatras (chariot festivals) there and around the world.

I was born in a conservative Orissan Vaishnava family in Puri, on the east coast of India. The Supreme Lord Jagannatha and His devotees were at the center of my life. As a child, I played with dolls of Jagannatha, Baladeva (Balarama), and Subhadra, the deities in the famous Puri temple. I still remember how my mother gave me enormous plates of Jagannatha prasadam and told me to always remember the Lord. I saw how the simple and devoted Orissan people—even doctors, engineers, and scientists—never neglect to honor Lord Jagannatha. I watched how the king of Puri becomes a humble servant and sweeps the street before Jagannatha’s cart during the yearly Rathayatra, or festival of the chariots.

Lord Jagannatha may look peculiar and strange to the Western world, but He is the life and soul of the Orissans. Even though I attended the Rathayatra festival for many years in my youth, it was not until I met the devotees of ISKCON that my devotion for Jagannatha deepened. Now Jagannatha is worshiped in many ISKCON temples around the world, and I have grown to see Him as the most merciful and charming person who excuses His devotees’ offenses and attracts them further along the path of devotional service.

Jagannatha means “Lord of the universe.” Many Vedic books mention that Jagannatha is Krishna. Baladeva is His brother, and Subhadra is His sister.

Although Krishna is absolute and transcendental to material nature, to accept the loving service of His devotees He appears before us as the deity in the temple, in the form of stone, metal, wood, or paint. Jagannatha is a wooden form of Krishna.

Because Jagannatha does not look like Krishna, people may wonder how He can be Krishna. Scriptures tell the story behind Jagannatha’s peculiar form.

Then a voice from the sky proclaimed, “Release the savara and build a big temple for Me on top of Nila Hill. There you will see Me, not as Nila Madhava, but in a form made of neem wood.”

Nila Madhava promised to appear as wood (daru), and thus He is called daru-brahma (“wood-spirit”). Indradyumna waited by the ocean, where the Lord arrived as a giant log floating toward the beach.

Disguised an old man, Vishvakarma, the architect of the demigods, arrived to carve the deities under the condition that he would remain undisturbed for twenty-one days. King Indradyumna consented, and the artist worked behind locked doors. Before the time period was up, however, the noise stopped, and King Indradyumna’s intense curiosity prompted him to open the doors. Vishvakarma had disappeared. In the room, the three deities of Jagannatha, Baladeva, and Subhadra looked as if unfinished—without hands or feet—and Indradyumna became greatly perturbed, thinking he had offended the Lord.

That night, Jagannatha spoke to the king in a dream and reassured him, explaining that He was revealing Himself in that form out of His own inconceivable desire, to show the world that He can accept offerings without hands, and move around without feet.

Lord Jagannatha told the king, “Know for sure that My hands and feet are the ornament of all ornaments, but for your satisfaction, you may give Me gold and silver hands and feet from time to time.”

Devotees now worship the same “unfinished” forms of Jagannatha, Baladeva, and Subhadra in Puri and in temples around the world. These forms are part of their eternal pastimes.

The Utkala-khanda of the Skanda Purana gives another account related to Krishna’s appearance as Jagannatha. (Utkala is the traditional name for Orissa.) Once, during a solar eclipse, Krishna, Balarama, Subhadra, and other residents of Dwaraka went to bathe in a holy pond at Kurukshetra. Knowing that Krishna would be there, Srimati Radharani, Krishna’s parents Nanda and Yashoda, and other residents of Vrindavana, who were burning in the fire of separation from the Lord, went to meet Him. Inside one of the many tents the pilgrims had set up at Kurukshetra, Rohini, Lord Balarama’s mother, narrated Krishna’s Vrindavana pastimes to the queens of Dwaraka and others.

The residents of Dwaraka are said to be in the mood of opulence (aishvarya), and they worship Krishna as the Supreme Lord. But the residents of Vrindavana are in the mood of sweetness (madhurya), and they have a confidential relationship with Krishna that surpasses awe and reverence because it is based on friendship and love. Rohini’s narration was thus extremely confidential, so she posted Subhadra at the door to prevent anyone from entering.

According to the Skanda Purana, the Jyeshtha-purnima, the full-moon day of the month of May-June, is the birthday of Jagannatha. Jagannatha is Krishna, but Krishna’s birthday is Janmashtami, in the month of Bhadra (August-September). This apparent contradiction is resolved if we understand that the Jyeshtha-purnima is the time when Krishna appeared in the form of Jagannatha with big, dilated eyes and shrunken limbs. This is known as mahabhava-prakasha, the ecstatic form of Krishna. Mahabhava means “the highest ecstasy,” and prakasha means “manifestation,” so Jagannatha is literally the ecstatic form of Krishna.

The poem Mahabhava Prakasha by the Oriyan poet Kanai Khuntia describes the confidential meaning behind the form of Jagannatha: He is the embodiment of Krishna’s pangs of separation from the residents of Vrindavana, particularly Radha and the gopis. Scriptures explain that intense feelings of spiritual ecstasy, especially in this mood of separation from a loved one, produce transformations in the body. Since Krishna is not different from His body, His internal feeling showed externally, and He assumed the form of Jagannatha.

The ecstasy of mahabhava is compared to an ocean. In the pastime with King Indradyumna, a giant log floated on the ocean. Similarly, the forms of Jagannatha, Balarama, and Subhadra float on the ocean of mahabhava.

When the sage Narada saw Krishna transformed as Jagannatha, he prayed to the Lord to appear like this again. Although the Lord is not obliged to anyone, He reciprocates with His devotees to fulfill their desires. In Garga Samhita Krishna states (1.27.4): “I am full—all the epics in one. Yet I surrender to the wish of My devotee and come in whatever form he wants.” Thus, just as Krishna appeared as Nila Madhava to satisfy Vishvavasu, He appeared in the deity form as Jagannatha and resides in Jagannatha Puri to satisfy the desire of Narada Muni.

This special form of Krishna is also known as Patita Pavana, the savior of the fallen, and anyone who takes His audience with proper consciousness is awarded spiritual liberation.

Jagannatha as Krishna of Vrindavana

Although Jagannatha is often identified with Krishna of Dwaraka, in the mood of opulence, His actual but confidential identity is as Krishna of Vrindavana, the lover of Radharani. The Jagannatha Chaitanyam says, “Radha stays in the heart of Jagannatha, and so does Sri Krishna.”

Krishna is known by His relationships, especially with the residents of Vrindavana, and devotees sometimes refer to Jagannatha in this way. Jagannatha is considered the consort of Radharani, who associates with Krishna only in His mood of Vrindavana. The ecstasy that resulted from Krishna’s love for Radharani caused Krishna’s transformation into the form of Jagannatha.

The Oriyan poet Banamali sings, “O Jagannatha, Yashoda’s dear foster son, Your Radha is like the chataka bird, drinking only the pure raindrops You shower as Your grace.”

In Vrindavana, Krishna assumes the graceful three-fold bending form (tribanga-lalita), and He wears a peacock feather and plays His flute. The Jagannathashtakam (verse 2) identifies Jagannatha with this mood: “In His left hand Lord Jagannatha holds a flute, on His head He wears peacock feathers, and on His hips He wears fine yellow silken cloth. From the corners of His eyes He bestows sidelong glances upon His loving devotees, and He always reveals Himself through His pastimes in His divine abode of Vrindavana. May that Jagannatha Svami be the object of my vision.”

The poetess Madhavi-devi, the sister of Ramananda Raya, writes in one of her songs: “The tender, sweet verses of Sri Gita-govinda bearing the name of Radha are woven into the khandua [pieces of cloth worn by Jagannatha each evening], which Lord Jagannatha holds close to His limbs.”

The Chaitanya-Chaitanya explains that Krishna came as Chaitanya to understand Radharani’s mood. During Rathayatra He danced in ecstasy in front of Lord Jagannatha (Krishna) to get His attention. In reply, Jagannatha consoled Him: “I never forgot any gopis or gopas, and especially You, Srimati Radhika. How can I forget You?”

Narada Muni revealed to Gopa-kumara in Brihad-bhagavatamrita (2.5.212–214): “Eternally as dear to Sri Krishnadeva as His beautiful Mathura-dhama is that Purushottama-kshetra. There the Lord displays His supreme opulence and yet charms His devotees by acting like an ordinary person of the world. And if you are still not fully satisfied after going there and seeing Him, then at least stay there for some time as the means to achieve your desired goal. Of course, your ultimate goal is pure love for the lotus feet of Krishna, the divine gopis’ life and soul—love that follows the mood of the Lord’s own Vraja-bhumi. You seek no other goal than that.” Love for Jagannatha is krishna-prema, love of Krishna, which is our ultimate goal. Krishna has become available to everyone in the form of Jagannatha.

Since Lord Jagannatha is none other than Krishna, His abode is equal to Vrindavana, where Krishna performs His childhood pastimes. Jagannatha Puri—also called Purushottama-kshetra, Sri Kshetra, and Nilacala (“the place of the blue mountain”)—contains all of Krishna’s Vrindavana pastimes (lilas), although they may be hidden from material eyes. The Vaishnava-tantra states, “Whatever lilas of Sri Krishna are manifest in Gokula, Mathura, and Dwaraka are all found in Nilacala, Sri Kshetra.”

By having the proper spiritual vision—eyes anointed by pure love of Godhead, krishna-prema—one can see all the pastimes of Krishna there.

Jagannatha is no one else but the ecstatic manifestation of Krishna, who appears in His most merciful form to help us go home, back to Godhead. Therefore, Srila Prabhupada has introduced the Jagannatha Rathayatra in many cities around the world to uplift the conditioned souls from the spell of maya (illusion). Let us take advantage of the occasion.