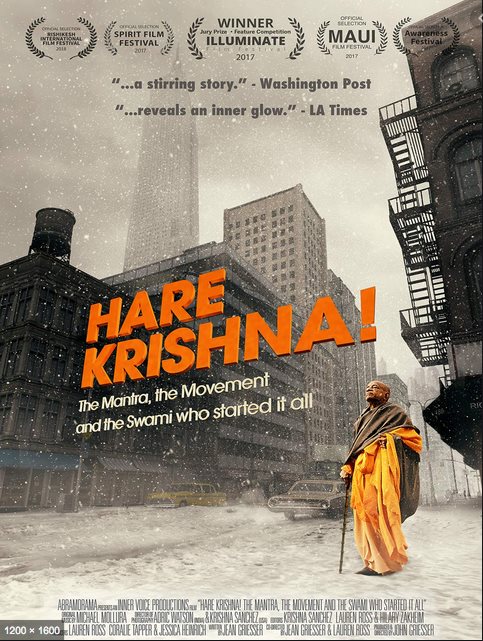 Dear Readers, You have a great opportunity to influence movie fans worldwide to watch “Hare Krishna!” by rating the film on IMDb.com. The more votes and higher the rating the more people will be persuaded to watch the film. If you are inspired, kindly follow these instructions:

2. Search for HARE KRISHNA! The Mantra, the Movement and the Swami who started it all

5. Create your IMDb account. That will take you back to the main page.

7. Choose a number from one to ten ten is the highest rating and you’re done.

Remember, millions of movie fans worldwide visit IMDb.com to see which movies they want to watch based on the audience rating and number of votes. We have a great opportunity with so many sincere followers of Srila Prabhupada to influence movie fans all over the world to watch HARE KRISHNA! and become purified by a 90 minute darshan of Srila Prabhupada. Thank you very much!

Please accept our humble obeisances. All glories to you.

On this auspicious day of your disappearance we wish to offer you our plans for ongoing distribution of your movie HARE KRISHNA! The Mantra, the Movement and the Swami, you who started it all.

Our wish is to put your movie in at least as many languages as your books which are in 86 languages. HARE KRISHNA! is now in 22 languages available on DVD and online streaming at HareKrishnathefilm.com.

Upcoming screenings include release of the film early next year in 25 cities in Italy and 12 showings in January on SVT the National TV station of Sweden.

The 50th anniversary of your founding ISKCON has come and gone and the celebrations were grand. Still, there are many more 50th anniversaries to come those of your arrival in cities and countries around the world forever establishing those places holy tirthas.

For instance, on Oct. 20, 1970, you arrived in Amritsar with your newly formed World Sankirtan Party the first large group of devotees you brought to India. That 50th anniversary will come next year in 2020. Soon after, you visited Indore, Surat, and Allahabad. In 2021 more 50th anniversaries follow with your visits to Sydney, Moscow, Paris, Detroit and Gainesville, Florida. Many more will come over the next 6 years all the way to the 50th anniversary of your departure in 2027.

Today we humbly offer the idea of celebrating these 50th anniversaries with a red carpet screening of your movie in the best theater in the city, inviting the mayor, VIPs, ambassadors, professors and representatives of businesses and influential organizations to your “second coming” 50 years later.

The review from LA Yoga Magazine aptly reads, “HARE KRISHNA! is the second coming of Prabhupada.”

Undoubtedly, your movie will become more and more popular as time goes on. IMDb.com, the biggest film review website in the world has listed HARE KRISHNA! in the top 100 of over 260,000 documentary films. Millions of movie fans worldwide visit IMDb.com to see which movies they want to watch based on the audience rating and number of votes. On their website, HARE KRISHNA! has an average rating of 9.5 out of 10 from the votes of 934 people.

Here is one review from their website. “One of the most spiritual and awakening movies I have ever seen. I’m a big fan of Hollywood movies and don’t have deep knowledge of religion but this movie is like magic.
It’s about one person’s struggle on his spiritual journey his humanity and kind nature. If you hear about Meditation, Yoga and Karma in the West, all credit goes to this Swami.”.

The more the public, especially the leaders of society have the opportunity to witness your glorious life, the more they will understand you, your mission and your followers.

Dear Srila Prabhupada, please bless our efforts to serve you in this way for many years to come.

Always begging for your mercy,