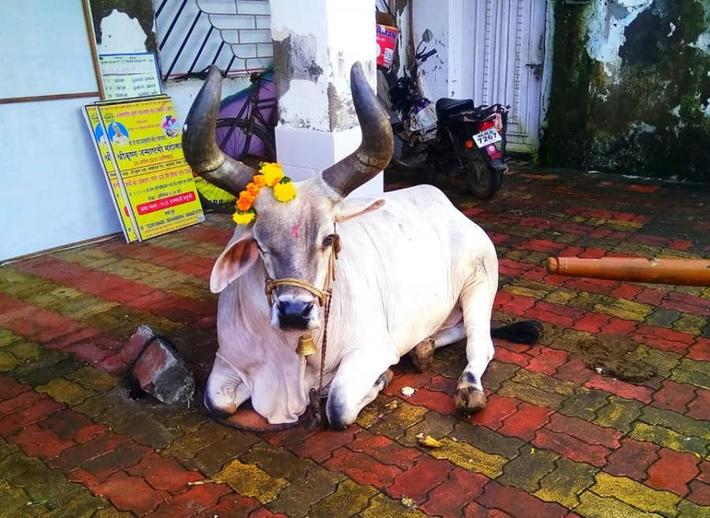 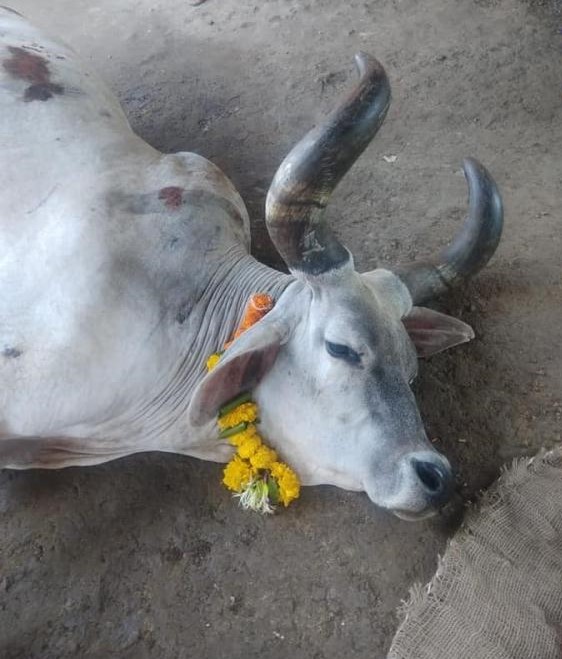 On October 2nd we were making our way from Virar to Govardhana Eco village, Wada. The distance is about 18 kms. After walking about 10 kms we were searching for place to honour prasada. As it was a highway there was no locality or school where we could have stopped for prasada. Finally we stopped near a small river. After prasada we again started walking and Vitthaal, our padayatra ox was walking behind the ratha. One padayatri was holding his rein. But if misfortune has to take place who is able to prevent it?

A truck traveling at full speed hit Vitthala badly. The truck driver did not stop to see what had happened. As Vitthala was hit, we all came running towards him and checked the injuries. Externally there were just minor scratches. A padayatri at heart Vitthala got up and started walking again. We stopped at a place and searched for a doctor but unfortunately he came after 2 hours. By that time Vitthala was in pain. Panduranga, his partner came running towards him as he could sense Vitthala’s pain. We were holding him behind. As the doctor came, I asked him why there was so much pain since there was no external injury. The doctor said, “There is lot of internal injury.” After some time Vitthala left his body.” His eyes were open and his face was bright. It did not look like he had left body.

We all were disheartened. For us he was one more padayatri, not an animal. He was filled with good qualities. He was humble, always ready to serve Their Lordships. He never bothered about food or never troubled us for anything. If any devotee went near him, he would raise his head and get his neck rubbed.
He also would put his Head on their feet. He always respected any person wearing dhoti kurta. He never harmed anybody. He was also at Kumbha mela this year. Many of us could not attend, but he was called to Kumbha mela. Such a good fortune! He had joined padayatra from Pandharpur during Ashadi 2018, during the 69th Vyasa puja of Lokanatha Swami Maharaja. He was 10 years old. He walked slowly so that people could have darsana of Their Lordships. He mostly pulled the book trolley which carried Srila Prabhupada’s books thus being instrumental in preaching and spreading Krishna consciousness. He completed a full round of
Maharashtra.

The other oxen Krishna and Kaliya were very sad, they were all in tears and did not take food. They all are missing Vitthala badly. As I called Gurudev, he said, “Vitthala has definitely gone back to Godhead as he served Their Lordships. Let us all pray for him. We will all miss him; infact padayatra will remember him and always glorify him.” Kirtana was performed since his accident till all the final rites were completed in a nearby farm.

I felt as if Vitthala had taken the misfortune coming to padayatra. Yet how could that be he left serving. He is a great devotee, in fact a great padayatri. We respect him and will always miss him.