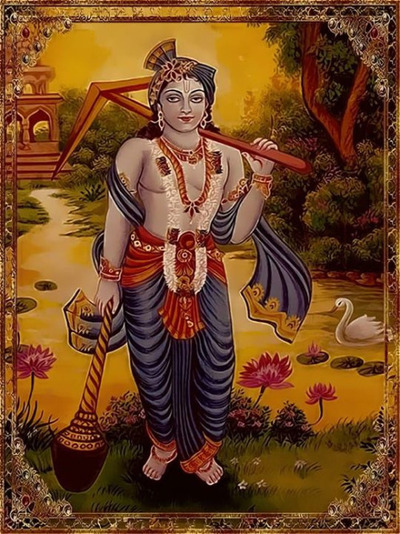 “O Kesava! O Lord of the Universe! O Lord Hari, who have assumed the form of Lord Balarama, the wielder of the plow! All glories to You! On Your brilliant white body You wear garments the color of a fresh blue rain cloud. These garments are the color of the River Yamuna, who feels great fear due to the striking of Your plowshare.”
“All glories to Rama-ghata, where Lord Balarama performed His rasa dance. All glories to Lord Balarama, the son of Rohini. All glories, all glories to the residents of Vrndavana.”
“Powerful Lord Balarama is sixteen years old, full of the luster of youth and has a fair complexion the color of crystal. Balarama wears blue garments and a garland of forest flowers. Balarama’s handsome hair is tied in a graceful topknot. Splendid earrings adorn Balarama’s ears. Sri Baladeva’s neck is splendidly decorated with garlands of flowers and strings of jewels. Splendid armlets and bracelets ornament Douji’s graceful and very strong arms. Balarama’s feet are decorated with splendid jeweled anklets. Sri Baladeva is Sri Krsna’s dearest friend. Baladeva is a great reservoir of the nectar mellows of many kinds of transcendental pastimes.”
“Lord Balarama’s beauty is enhanced by the earrings touching His cheeks. Balarama’s face is decorated with tilaka made from musk, and Balarama’s broad chest is ornamented with a garland of gunja. Sri Baladeva’s complexion is as white as an autumn cloud, and He wears blue garments. Balarama’s voice is very grave and His arms are very long, touching His thighs.”
“The splendor of Lord Balarama’s transcendental form eclipses many millions of glistening rising moons, and the slightest scent of His boundless strength is sufficient to destroy many armies of demons. Although He knows the supernatural power of His younger brother, Krsna, still, out of love for Him, Balarama never leaves Krsna alone in the forest even for a moment. I offer my prayers to Lord Balarama, the enemy of Dhenukasura.”
“The Supreme Personality of Godhead, Krsna, is the fountainhead of all incarnations. Lord Balarama is His second body. They are both one and the same identity. They differ only in form. He is the first bodily expansion of Krsna, and He assists in Lord Krsna’s transcendental pastimes.
That original Lord Krsna appeared in Navadvipa as Lord Caitanya, and Balarama appeared with Him as Lord Nityananda.
May Sri Nityananda Rama be the object of my constant remembrance. Sankarsana, Sesa Naga and the Visnus who lie on the Karana Ocean, Garbha Ocean and ocean of milk are His plenary portions and the portions of His plenary portions.
Lord Balarama is the original Sankarsana. He assumes five other forms to serve Lord Krsna. He Himself helps in the pastimes of Lord Krsna, and He does the work of creation in four other forms. He executes the orders of Lord Krsna in the work of creation, and in the form of Lord Sesa He serves Krsna in various ways. In all the forms He tastes the transcendental bliss of serving Krsna.
That same Balarama is Lord Nityananda, the companion of Lord Gaurasundara.”