vasati dasana-sikhare dharani tava lagna
sasini kalanka-kaleva nimagna
kesava dhrita-sukara-rupa jaya jagadisa hare
0 Kesava! O Lord of the universe! O Lord Hari, who have assumed the form of a boar! All glories to You!
The earth, which had become immersed in the Garbhodaka Ocean at the bottom of the universe, sits fixed upon the tip of Your tusk like a spot upon the moon.

“Today is the incarnation day of Lord Krishna’s appearance as the Boar. He lifted the world when it was submerged within the water of Garbhodaka Ocean. The universe which we are seeing is only half. The other half is filled with water, and in that water Garbhodakasayi Vishnu is lying. So, one demon, Hiranyaksa, pushed this earthly planet within that water, and Lord Krishna delivered this earthly planet from water in the shape of a boar. So, that auspicious day is today, Varaha-dvadasi. This Varaha, boar, or hog, delivered this earthly planet by the tusk, and He kept the whole world on His tusk. We can just imagine how big He appeared. And the world at that time appeared just like the moon disc with some marks on it. So kesava dhrta-varaha-sarira. The poet says, ‘My dear Lord, You have appeared as the great boar. So let me offer my respectful obeisances unto You.’ ”

Hiranyaksha, the younger brother of Hiranyakasipu saw his brother was such a terrible demon ,he wanted to conquer everything everywhere by all illegal means so Hiranyaksha wanted to please him. Hiranyaksha and Hiranyakasipu performed such tremendous austerities that they became mighty powerful and their bodies were like mountains and they were just undefeatable, so Hiranyaksha just went around destroying everyone and everything conquering subjugating, and the Demigods were so afraid that they would all flee abandoning their abodes when they heard he was coming, what to speak of the residence of this earth.

Hiranyaksha created such terrible exploitation by stealing and plundering gold that it created an imbalance in the earth that the earth actually fell to the bottom of the Garbhodaka ocean. Causing all sorts of chaos the demigods surrendered to Lord Brahma. 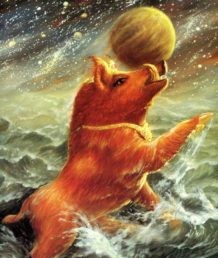 When Lord Brahma began to meditate on the supreme personality of Godhead, a little tiny bore the size of the tip of a thumb came out from His nose and it went into the sky. Brahma was bewildered by such an extraordinary sight and all the saints and sages around were equally puzzelled. The bore began to grow, He grew until He was like a size of a mountain and then the Lord began to roar and when He roared it was like the roaring of a mountain and immediately they could all understand that this was the supreme Lord Narayana who has taken this most fantastic, incredible form. The Lord further grew in such size that he covered the entire sky and the great saints and sages, and the demigods they began to offer prayers of love to the supreme personality of Godhead, glorifying his supreme most transcendental position and the Lord again continued to roar, and he cast his merciful glance upon them assuring them that there is nothing to fear.

The Lord dove in the bottom of the Garbhodaka ocean with his nose searching for the earth and he came to the earth planet. In a beautiful, transcendental gesture he lifted the earth upon his beautiful white tusks about to head back when He was challenged by Demon Hiranyaksha and  they locked maces and it created a resounding echoing effect that it deafened the entire universe and everyone was watching as spectators. The demons were all rooting for Hiranyaksha and the devotees on the Lord’s side. Demon Hiranyaksha was defeated after an exhilarating duel, and higher living beings began to shower flowers upon the Lord. Maitreya Muni explained to Vidura the blow by blow action of this great battle in Srimad Bhagavatam.

In ISKCON Mayapur the devotees celebrate this day and worship Lord Varaha Deva by worshipping  Lord Varahadeva in the altar. An abhishek is also performed in the temple full of devotees chanting the Lord’s holy name and the glories of Lord Varaha.