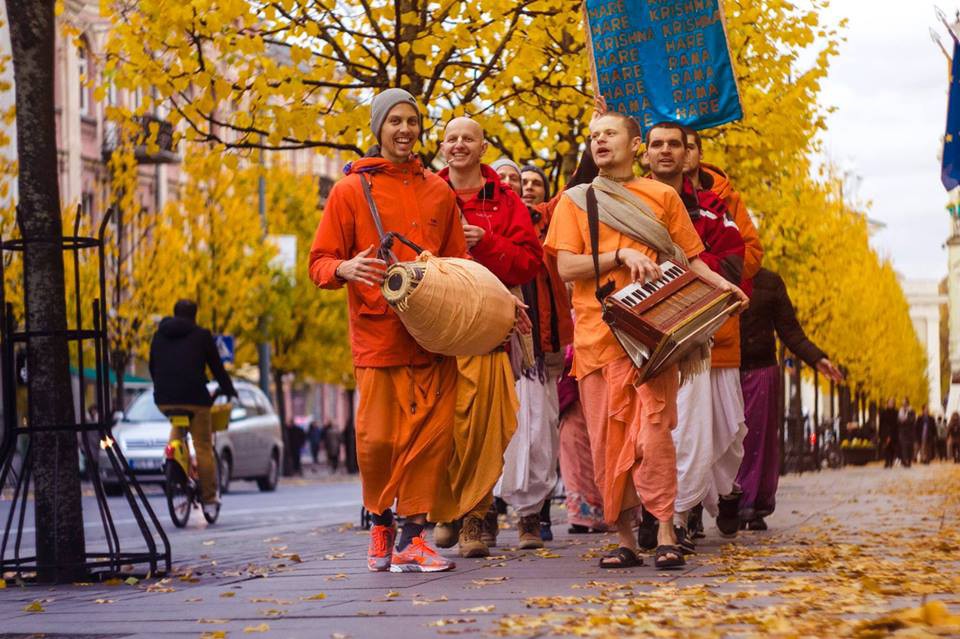 “Srila Bhaktisiddhanta Sarasvati Thakura indicates that rather than trying to separate conditioned souls by materialistic distinctions, one should bring them together to chant the holy names of the Lord and propagate the sankirtana movement of Lord Caitanya. A nondevotee, or even an envious third-class devotee, is not interested in uniting people on the platform of love of Godhead. Instead he unnecessarily separates them by emphasizing material distinctions like “communist,” “capitalist,” “black,” “white,” “rich,” “poor,” “liberal,” “conservative” and so on. Material life is always imperfect, full of ignorance and disappointing in the end. Rather than praising and criticizing the high and low features of ignorance, one should be absorbed in Krsna consciousness, on the spiritual platform of eternity, bliss and knowledge.”
Srimad Bhagavatam, purport, 11.28.2

Recently I began reading the Srimad Bhagavatam again from the very beginning. Last year I started reading the Bhagavad Gita again from the beginning. Reading scripture is very different for me than ever before. Instead of just reading and studying, I am thinking. I stop to think about the concepts and teachings so much, as I read, that I can sometimes stay on the same page, or few pages for days at a time. So, right now, with the Srimad Bhagavatam, I’m thinking about the introduction.

In the introduction Srila Prabhupad presents a brief sketch of the life and mission of Lord Chaitanya.

These are some of the thoughts I’ve been having while reading it:

There is so much division in the world today. We are all divided to do our various bodily designations, and our concepts of life.

We all talk a lot about wanting world peace, wanting to “unite” and get along with each other. Global Unity. Global Community.

“In this present age quarrels take place even over trifles, and therefore the sastras have recommended for this age a common platform for realization, namely chanting the holy names of the Lord.”
Srila Prabhupad, Srimad Bhagavatam, Introduction

As devotees, we understand that Lord Chaitanya never acknowledged these distinctions based on bodies, birth, caste, creed, education, or status, etc. He came to deliver all of the fallen souls of this age, and that includes everyone.

“The mission of the Lord was to deliver the hopelessly fallen souls of Kali-yuga, and the brothers Jagai and Madhai were typical examples of these fallen souls. Ninety percent of the population of this age resembles these brothers, despite high birth and mundane respectability. According to the verdict of the revealed scriptures, the total population of the world in this age will be of the lowest sudra quality, or even lower. It should be noted that Sri Caitanya Mahaprabhu never acknowledged the stereotyped caste system by birthright; rather, He strictly followed the verdict of the sastras in the matter of one’s svarupa, or real identity.”
Srila Prabhupad, Srimad Bhagavatam, Indroduction

As followers of Lord Chaitanya, we therefore accept that these various mundane designations have no importance. It takes a certain amount of realization to even see that, what to speak of be able to fully act on it, but we at least understand that this is the mission of Lord Chaitanya. The whole world can be united under one common cause of the Yuga Dharma of this age, the chanting of the holy names of the Lord.

“To confirm the Lord’s mission, all the people of the world will accept the holy name of the Lord as the common platform for the universal religion of mankind. In other words, the advent of the holy name took place along with the advent of Lord Sri Caitanya Mahaprabhu.”
Srila Prabhupad, Srimad Bhagavatam, Indroduction

Those of us who are on this path and have accepted this mission of Lord Chaitanya, and are trying to follow His teachings, and help to spread this Yuga Dharma have an added responsibility to let go of these bodily designations. How can we expect to become united in our mission of spreading the chanting of the holy names if we are busy making distinctions between ourselves based on these bodily concepts?

I’m not talking here about practical reality, day to day living, where we have to understand that a man will wear one kind of cloth, and a woman will wear a different kind. I’m talking about placing meaning and importance that tells us that “this person who is American is better than this person who is Australian” (for example).

These are very basic understandings, and we all know these things. However, in our day to day actions, we don’t always act on them. When we don’t remember these teachings and act on them, this kind of consciousness spreads until we have “groups” and “clicks” and within our own “united” teachings of acceptance of the universal chanting of the holy name of the Lord as the common (and only) dharma for this age.

“common platform for the universal religion of mankind”

The chanting of the holy names of the Lord.