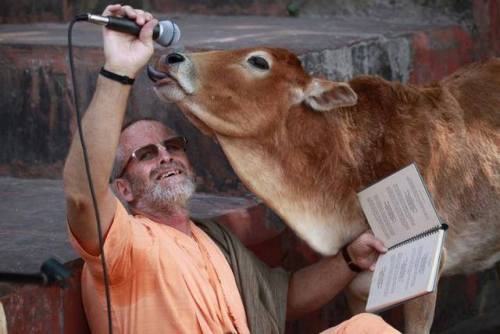 And so many instructions in the Bhagavatam, just like “Paro bhaktir adhokshaje” – “the supreme dharma is to serve Krishna and nothing else”.

And Sri Caitanya Mahaprabhu said “Na dhanam, na janam, na sundarim…”, He says “I don’t want wealth-dhanam, followers-janam, and beautiful wife-sundarim (and sometimes we meet another translation “poetic glories of this world to convince me that this world is a good place to be”). And then He says “mama janmani janmanishvare”. And the other day I was listening to Srila Prabhupada saying, that here He says “I don’t want liberation, I don’t even have the condition that I wish to be free from whatever I’m experiencing here. But the only thing I want is Pure Bhakti”.

So here the indication is there that we must go from the conditioning nature to the unconditioning. And sometimes it doesn’t happen quickly. Because we’ve been conditioned since immemorial times.

In the Gita itself Krishna says in our mind, in our senses, in our intelligence there is programming of lust. He says in this creation, starting from Brahma, from top to bottom there is no one who is free from the influence of the modes of the material nature.

But nevertheless by the grace of the Lord and His pure devotee we’ve come in contact with bhakti. So our aspiration should not be to remain in the lower stage. But our inspiration should be that step by step we follow the instructions we’ve received from acaryas, Guru parampara and the Lord Himself, so we would become free from the conditional nature.

And when we endeavor in that way – Krishna is happy, because He sees we want to come to Him. Then He gives us His mercy and it is only by His mercy that we can overcome this.

So our endeavor of love should be unconditional and unbroken. Jayatma suprasidati, Suta Goswami says that if you do this type of activity, then it will thrill your soul like no other activity ever thrilled your soul. He doesn’t say just “prasidati”, than you’ll be peaceful and satisfied and fulfilled. He says suprasidati, you’ll become SUPER excellently satisfied and fulfilled.