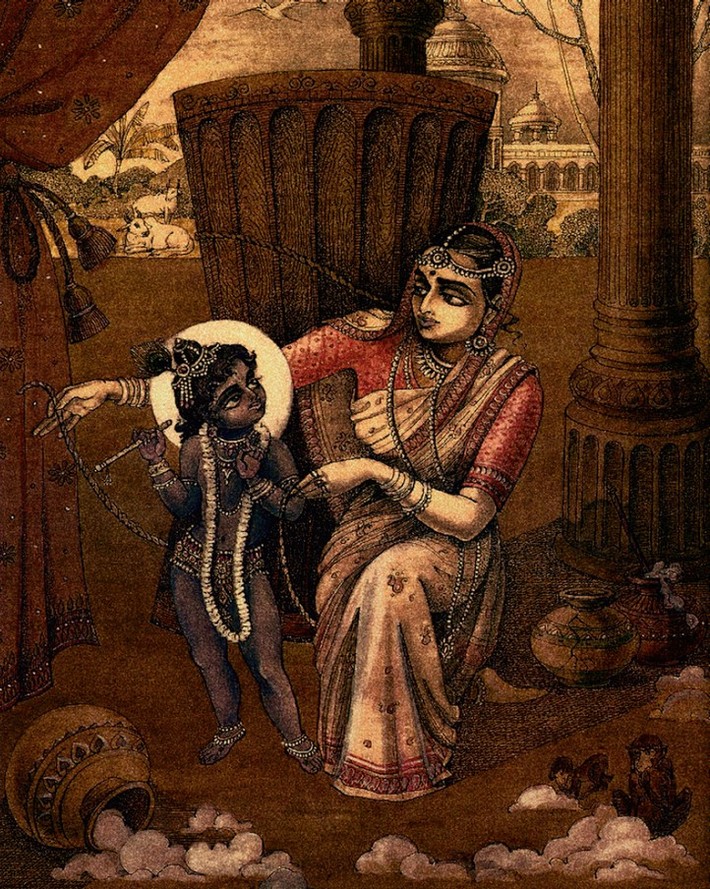 One of the important legends associated with Diwali is Damodara lila, a pastime in which mother Yashoda tried to tie Krishna with a rope. The rope turned out to be two fingers short. So she tied more rope, but, no matter how many ropes she tied together, the combined rope remained two fingers short.

This pastime signifies that no matter how much we try, we will always fall short in our attempts to understand God with our intelligence. Modern science is finding the same about the universe too, which, the Vedic literatures state, is a product of God’s superintelligence. Centuries of cosmological research has increased scientific information, but not scientific understanding, because of “two” unexpected trends:

1. The more scientists know, the more they realize how little they know –

Science “conquered” space – and realized how little it knew about space. To the uninformed, space missions proved human greatness. To the well informed, they showed human smallness. Space research reveals that there are more stars in the universe than all the grains of sand on all the beaches of earth, and our sun is just one of these cosmic grains. No wonder former President of the American Association for the Advancement of Science Kenneth R Boulding admitted, “Cosmology… is likely to be very insecure because it studies a very large universe with a small and biased sample.”

2. The more scientists know, the more they realize what they previously “knew” was wrong –

Newton’ laws were considered bedrock truths of physics till they were found inapplicable in the microscopic and the macroscopic realms. Quantum physics was developed to explain the atomic world, and relativistic physics for the cosmic. But then both of them turned out to be violently contradictory. As both have to coexist at the origin of the universe – when both the microscopic and the macroscopic were one, science had the formidable challenge of devising with a Theory of Everything (ToE) to unify these irreconcilable pillars of science. Let’s review the history of the development of the ToE:

Initial vain roar: Physicist Leon Lederman, former president of the American Physical Society, “we hope to explain the entire universe in a single, simple formula that you can wear on your T-shirt.”

Subsequent exasperated grunt: Astrophysicist Steven Weinberg, a Nobel laureate in physics, “As we make progress understanding the expanding universe, the problem itself expands, so that the solution always seems to recede from us,”

Final concealed whimper: Theoretical physicist John Wheeler of Princeton University, “Never run after a bus or woman or cosmological theory, because there’ll always be another one in a few minutes.”

Going back to the pastime, the rope Mother Yashoda was trying to tie around Krishna was only two fingers short. But the rope of ToE that science has been trying to tie around the universe is not only short, but also broken, as Stephen Hawking confessed, “The theories (in physics) we have so far are both inconsistent and incomplete.”

Mother Yashoda did eventually succeed in tying Krishna – but only after when Krishna, by His own grace, let Himself be bound. Similarly science can understand the universe, especially our place and purpose within it – but only when it harmonizes with super intelligence by researching and applying the verifiable spiritual science delineated in BG, thus paving the way for spiritual revelation.

That’s not as unscientific as it may sound. A scientist no lesser than founder of quantum physics Nobel Laureate Max Planck stated, ” For religion, God is at the beginning; for science, God is at the end.” And science has started reaching that end by its discovery of “fine tuning” of the universe – micro-precise adjustment of the values and inter-relationships of at least 80 parameters essential for life. Obviously fine-tuning needs a fine tuner. Of course, diehard devotees of atheism have proposed chance and multiple universe theories, but these are all intrinsically unproven and unprovable. They fit better the realm of science-fiction than science.

When scientists accept the verdict of their own evidence, they will remove the obstacle in a long-overdue spiritual leap of science. Lest they hesitate or falter in this bold step, renowned physicist Micheal Faraday’s reminder can urge them on, “We ought to value the privilege of knowing God’s truth far beyond anything we can have in this world.”

We invite readers to send their comments to ss@iskconpune.com Selected comments will be published in subsequent issues.

Invite your friends by requesting them to send an email to: